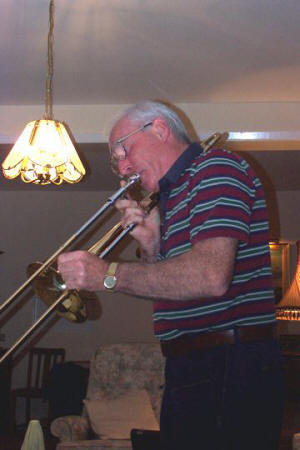 Once upon a time a banjo player found a horn ...

And the Lord said unto Keithicus, 'awake, heed my words, let there be music for the angels.'

And Keithicus awoke and set about with glee & gusto and toiled merrily for three score years until songs flowed from his new horn.

And the Lord was pleased.

But as the rhythms pounded there was plague & pestilence in Dixieland and Keithicus grew mighty old and wrinkled from his abundance and Pagans infiltrated the troupe.

The Lord commandeth 'Where are the harmonies?'

And Keithicus was troubled 'Lord I am undone, the fishin' and the hikes encroach and my practice is doomed by the little Connor McGoo … I am all spent.'

But the Lord persisted 'What of the toons for Gabriel's horn?'

'I know not, there is sand in my slide and bugs in my bend … I cannot work on the toons.'

But the Lord came again 'What of Runnin' Wild, play the bass lines like the angels … tempos must rise.'

Then Keithicus begat agitation and became assailed by doubts and spake thus 'I've got wrong, my dots are missing and my quavers move in a blizzard of funk, the Busker's trills are multiplying profusely and the piano man is drunk.'

Keithicus was sore and the blues descended on the bandstand.

Then the Lord asketh 'What troubleth thee, why does't thou doubt me, have I not banished the dreaded Sheik of Araby from the play list, and allowed thee to solo alone with Margie?'

And Keithicus wrung his hands and said 'Verily I am sorely tried, but it's happened again … the pluckers G string is broken and all hell has come out, even the Crooner now croaks … there is but turmoil around.'

'But where are the lullabies and the love songs of the celestial spheres?'

'It is all but problems, oh Lord, I've seen Deacon Jones and my legs are slapped but my arpeggios wilted and my bass clef is bent, I have cloth in my ears and my lip bleeds blood … I am wanting.'

And it came to pass that the Lord saw the trouble in his mind and smoothed the slide and sent Keithicus forth again 'Fear not, I will give thee perfect pitch and all shall be well … get into B flat.'

And Keithicus said 'Lord, it will be so.'

But it was not so!

The cymbals clanged and the drums went bang and Keithicus belched great notes of foreign chords and he trembled.

And the Lord came one last time and was filled with remorse and calmed Keithicus thus 'Fear not, my child, I now see the light, the harmonies are stolen by the bandit Mozart and the water has turned to temptation known as Greenalls.'

'No! No Lord, I truly repent but it is not me myself … hear this … the band play Asunder as I play The Saints!'

And the band played up tempo in E natural and the notes screecheth and reverberated throughout the firmaments and causeth great pain.

And as the earth shook, rattled and rolled and the heavens rocked with the assault, the Angels ran about in confusion.

The Lord's wrath was greatest and there was much rending of cloth and gnashing of teeth.

Then it came to pass that Keithicus came of age and saw the folly in the band … but he was still troubled and sought the Lord again and asketh 'Lord, great is thy wisdom, and now I am ancient … tell me thou knowest how it is?'

And the Lord perceived Keithicus's great grief and comforted him in his great age thus 'Keithicus, my son, yes, I knowest how it is … why else does't thou think I am sending the flood'!

(NB translated from the original Sumerian)

... and a special treat ... listen to Keith 'the banjo player' attempting to play Bill Bailey ... and doing pretty well ... with a little help from a friend ...

... and getting prematurely soulful on Buddy Bolden's Blues ...

and fun with Bucket's got a Hole in It

and the piano man with a lilt Shine

(NB we play for our own meagre fun and the gross amusement of others ...)