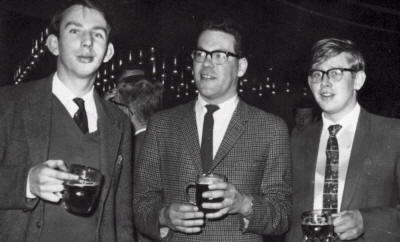 It’s tough. We’ve lost a mate. We never thought it would happen, Hedley was indestructible. But I remember the good times.

We first met on the cricket field at school, he bowled fast medium off cutters, always on the spot. At the King’s School we thought the wags at The City Grammar School were a cut below, but Hedley was special, a special friend ... always reliable and always fun, and a natural sportsman like his dad. We tried out all the sports we could find around Chester at the time, including poker. I had to work hard at them, but he beat me at everything and then kept the newspaper cuttings to prove it!

Eventually I managed to match him at something ... beers in The Commercial Hotel on regular Monday nights out.
We planned and fully intended just to have a pint and then go on to the Wall City Jazz Club at Quaintways across the road. There we could meet up with the girls we’d met the previous Saturday at the jig at Clemences Ballroom. But somehow we never made jazz club and had one for the road instead. Northgate Ales 1/10d a pint. We guessed the girls wouldn’t have pitched up anyway. And Hedley reckoned we were a bit out of our depth with girls and we should stick to ale.

Life seemed to be full of Chester happenings; Boughton Hall Cricket Club, Chester Rugby Club, Glan Aber Tennis Club, the Nurses Home ... and two Austin A35 vans. I had a cheap grey one but Hedley had a posh blue one with seats in the back which cost a fortune, although I recall he complained that the seats were a waste of space because there was no room for a mattress.

Then all that changed with the appearance of a young domestic science teacher in the staff room at school. Christine was captivating ... Hedley started missing Monday nights at The Commercial and told tales about stunning blondes who were capable & competent and could turn their hands to anything. He promised me that he’d find out if she had a sister!

Of course Christine was too good a catch to lose and marriage quickly followed and then three strapping lads... and grandchildren ... 125 Easemore Road, Redditch, then Alcester and Worcester and then a Headmastership and fulfillment ... always hours of fun, non stop ... and even later when stricken with disability, always fun.

And now I look forward to seeing you in the celestial tavern and hearing yet again those enticing words, ‘thanks ‘Edley and mine’s a pint!’ ...

'Running Bear' was a hit for Johnny Preston in 1959. Wearing only a grin, swinging a towel and singing [not very tunefully] 'Running Bear' on the way to the showers, Hedley was met by Edna & Mary the cleaners: Mary, from the Potteries had 'Nivver sin onythink lark itt'.

Hedley had a predilection for sweet things, apparently right to the end, turned a few stomachs and raised as many eyebrows by eating Munchmallows covered with sweetened condensed milk.

We each had spent a year or so at university before going to Alsager, H to Leeds and I had been to Bangor.

Hedley also had had the distinction of going out with Joe Loss’s niece ... not many people know that!

Hedley’s motorbike: registration number was chalked on to new fairing and as Hedley’s luck would have it, while he was out one night, the chalk was washed off by the rain. The sharp-eyed local PC Plod noticed this and Hedley was summoned to appear before the local magistrate who threw the case out of court. I was offered a lift to college on the back of the said bike. I accepted. I think H took a sadistic delight in scaring the wits out of me several times during the journey. The bike was also put to good use when H would occasionally visited 'The Romping Donkey' a pub near Alsager with his future brother-in-law, Kaye Wilde.

John B has told about H’s prowess at sport and he played for the college rugby and cricket teams. One Saturday the rugby team had a blank fixture so H, with his athleticism and ball skills from cricket, volunteered to play for the hockey team. Here H’s luck strikes again and one of the opposing team thwacked him across his padless shin, thus exposing the bone. Quite gory. That was his only appearance on the hockey field.

John has also mentioned The Commercial in Chester and in our early days of teaching, I used to join H’s Monday evening sessions and thanks to the hospitality of Renee & Hedley Simms, H’s parents, I would often go back to Saxonbury, Rake Lane, to stay the night. On one occasion, with a particularly full bladder, and not wishing to disturb his parents late at night by visiting the bathroom, H opened the upstairs bedroom window and gave his father’s rhubarb an extra feed of nitrogen.

In the summer of 1964, H developed a mental problem and while he was in hospital I gave Chris a scooter ride to visit him. I have never asked her if she’d been as scared as I had been on H’s bike. H had previously done me the honour of asking me to be his best man and shortly after coming out of hospital H married Chris, who was magnificently supportive of him through his difficult first years, as she was during the whole of their marriage.

I stayed with H & Chris at Easemore Road, Redditch, a couple of times and on one Saturday afternoon we went to watch H playing in a cricket match. There came another instance of H’s luck. He was batting at the non-striker’s end and the other batsman hit a straight drive, H was backing up out of his ground, the ball was deflected by a fielder on to H’s wicket: D H Simms run out 0.

These few memories will serve to keep H alive in my mind and I’ll always remember him with affection.

Some memories of beer-drinking in the early sixties

Having qualified together at Alsager, Hedley and I started our teaching careers in Ellesmere Port and we would regularly imbibe at The Commercial Hotel in Chester on a Monday night. After the bell we went back quite many times to Saxonbury, Rake Lane, Eccleston where Hedley lived with his parents. Mostly we forget but some things we remember. On one occasion, in the early hours of Tuesday morning, Hedley, thoughtfulness personified, avoided disturbing his parents (by visiting the bathroom) opened our bedroom window and gave his Dad’s rhubarb an extra feed of nitrogen.

In these early days, there was a goodly caucus of drinkers whose names I’ve recently been reminded of: John Birchall, Mike College, John Milroy and later on, the Neston contingent, John Hughes and Barry Evans. At the time, I was a reformed smoker and would watch JPB lighting up: he would inhale his first lungful vigorously, wrapping his tongue round the smoke and then take a man-size mouthful of his Greenall pint. I took up smoking again not long after that and only saw the light at 9.45 pm on Sunday, 26 March 1995 [ I was a pipe-smoker by then].

Mention has also been made of late Monday visits to Quaintways, but nothing was said of the illicit fire-door entrance. Obviously it needed some-one already in the establishment to open up so that those who were ambitious could gain free admission. I don’t think this happened very often though, as nobody could afford the initial entrance fee.

Barry Evans [Bas], whose pleasures were small, he drank, at most, two bottles of Mackeson stout, so he was our permanent designated driver. I don’t think the title was invented until 1967, when Barbara Castle played her trump card with the Breathalyser. When I acquired a scooter in 1963, [I learnt how to apply the brakes in that very hard winter] I used to ride the Lambretta from Irby to the Shrewsbury Arms (now the Hinderton Arms) leave the scooter in the pub car park and then go on to the Commercial, Chester in Bas’s motor. John Hughes was the permanent passenger. One Monday, after having imbibed about eight pints, Bas brought me back to pick up the scooter. I drove about a mile along the Chester High Road and there appeared suddenly before me a VW Beetle. I managed to brake reasonably well, but I caught the Beetle’s offside rear wing and dent it. I suspect the driver had been parked in a lay-by and pulled out in front of me. I was in no state to argue about it or call the police so I gave him the £20 he suggested for him to have the wing repaired at Offley’s in Ellesmere Port.

One Monday Hedley, John and I ventured out to Connah’s Quay swimming baths prior to a pub session and, for some reason, went back to the Boathouse in Chester. I was particularly thirsty having swallowed quite a few mouthfuls of chlorinated water so I decided to try a pint of McEwans bitter and was instantly converted to bitter drinking. Up until then brown mixed (mild and brown ale) had been my preferred tipple, so I have to thank Hedley and John for my Road to Damascus moment.