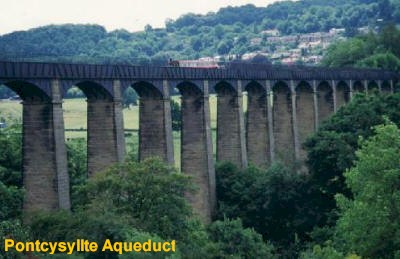 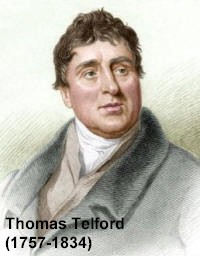 Telford served his time as an apprentice stone mason in the village, and exercised his newly acquired skills on a carved headstone for his father's grave -

'In loving memory of John Telford who after living 33 years, an unblameable shepherd, died at Glendinning November 1757'.

Thomas Telford never knew his dad, he died just a couple of months after Thomas was born. Dad John was a meagre herder of sheep, what else was there to do in Eskdale? Most of his friends before and after the Union in 1707 occupied themselves with sheep rustling across the border! 'Laughing Tam', as young Thomas Telford was known, was inspired by his cousin Thomas Jackson to go for greater things.

The truth was that Thomas Telford's genes were inherited 50/50 from his Mum & Dad in 1757 - Thomas Telford birth and mum & dad - John Telford (Telfer) & Janet Jackson.

For sure it all started in Westerkirk ... perhaps with William & Sarah -

John was one of three Telfer brothers -

Born in Langholm in 1723 son of George Telfer and Elizabeth Walker, he married Mary Linsay and had 3 children. He passed away 2 Feb 1764 in Flatt, Bewcastle. Mary died age 45 in Lanercost.

Very many Telfords were buried in the Churchyard at Bewcastle and there was a record of the burials for all to see in the Church.
Bewcastle, a most interesting place, ancient buildings, straight across the border in Scotland, is Canonbie the Langholm and the Esk and up to Westerkirk. )

Thomas (1735-) born in Westerkirk a Steward of Wester Hall who organised Tam's move to better things in London.

(NB not this lot from Rutherglen?

Tom waxed and read books ... he started his quest for education early, there was a library in Glendinning, at Miss Pasley's house, and he read it!

As all great men attest, 'we are all dwarfs on the shoulders of giants' ...

In 1780 Thomas found jobs hard to come by and he went searching in Edinburgh for a while before moving to London in 1782. He noted,

'in the year 1782 after having acquired the rudiments of my profession, I considered that my native country afforded few opportunities of exercising it to any extent and therefore judged it advisable (like so many of my countrymen) to proceed southward, where industry might find more employment and be better rewarded'.

'he was bent upon self-improvement and gaining a larger experience of life as well as knowledge of his trade that he determined to seek employment elsewhere'.

But he always remained devoted to his mother Janet Jackson and returned to Dumfries often to see her and his mates.

In London he honed his skills in the specification, design and management of building projects at the Portsmouth dockyard. In 1787 he became Surveyor of Public Works in Shropshire, where he built 40 bridges, including major crossings of the Severn. In 1801 Telford devised a master plan to improve communications in the Highlands of Scotland, a massive project that was to last some 20 years, it included the building of the Caledonian Canal along the Great Glen.

Thomas Telford, like so many others, left Dumfries and went south and at some stage other members of his family also left and ended up in Lincolnshire. No doubt they all went where the jobs were, the urban trek always accompanied industrialisation ... and an agricultural revolution always had to precede an industrial revolution ... how else were the cities to be fed?

Telford himself wrote about emigration from the Highlands in The Scots Magazine in 1803.

The highland clearances were not the whim of evil landowners but a consequence of economic reality and the agricultural revolution.

Sheep farming produced valuable meat and wool in great demand from fewer farm workers on land unsuitable for alternative cattle & cultivation. Lambs, wool & meat prices were rising and rents for land suitable for cattle were some 3 times more expensive than land suitable for sheep. Converting large districts of the country into sheep walks was a 'no brainer'.

But sheep farming, of course, employed far fewer hands, one shepherd & his dog was able to look after hundreds of sheep. There were many fewer jobs in the highlands. Sheep and shepherds were in demand and but sometime in the future supply & demand would come back into kilter.

Although rents were relatively high on cattle land, milk and meat prices were high, and many cattle farmers cashed in and financed emigration to America on the proceeds and waxed lyrical about milk and honey in the new world. Those turned out of their cattle farms to make way for sheep 'flocked' to America.

Should Government intervene or become a slave to supply & demand and the dismal science?

Telford was clear, sheep farming should not be stopped but hardship could be alleviated!

Each should pursue their own interests & aptitudes and move to where there were jobs and the 'whole' would benefit from increased output at lower costs. Telford himself, of course, had left for lucrative jobs in the south!

Telford then went political and abandoned his economic science. Yes, sheep farming in the Highlands was a special case but it would rebalance sometime in the future and then the labour would be needed for future opportunities. Sure there was a polarisation of viewpoints but everyone agreed future opportunities would need infrastructure projects now ... taxpayers money should be spent to build The Caledonian Canal!

But he backed a grandiose failure.

Although he had grasped the essence of Adam Smith & the Scottish Enlightenment and free trade. Here was a great engineer messing in politics. Free trade was great for everyone and far from 'dismal' but it did require constant hard work and change; there was no free lunch.

The canal was a commercial failure and is now a Scheduled Ancient Monument and tourist attraction.

'From about 1840 railways began to threaten canals, as they could not only carry more than the canals but could transport people and goods far more quickly than the walking pace of the canal boats. Most of the investment that had previously gone into canal building was diverted into railway building' ... 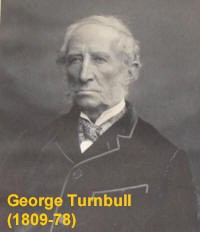 After his death his assistant, George Turnbull, wrote,

'Mr Telford was of the most genial disposition and a delightful companion, his laugh was the heartiest I ever heard; it was a pleasure to be in his society' ... he added somewhat ruefully, 'I made all the arrangements about the house and correspondence. Telford had no blood relations that we knew of ...'

... but what George Turnbull didn't know was that some of Thomas Telford's genes were spreading far and wide and some ended up as the prized, albeit temporary, possessions of John William Thorpe ...

It was rumoured Sarah's mum Mary was a cousin of Thomas Telford ...

1793 the Llangollen / Ellesmere Canal linked the ironworks and collieries of Wrexham via the north-west Shropshire town of Ellesmere, with Chester, using the existing Chester Canal, and then to the River Mersey, Liverpool & everywhere.

1796 the Buildwas Bridge was Telford's first iron bridge, obviously influenced by Abraham Darby's bridge at Ironbridge from 1781, but, as Telford himself retold, his bridge efficiently used only 173 tons whereas the other contained 378 tons.

A5 London to Holyhead road.

Aldford Iron Bridge crossing the River Dee north of the village of Aldford, Cheshire, England, linking the village with Eaton Hall, the Duke of Westminster's seat.

The Telford Centenary was celebrated in 1934. 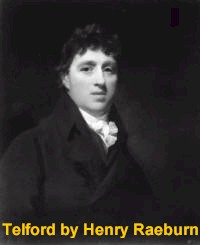 'The Life of Thomas Telford: civil engineer with an introductory history of roads and travelling in Great Britain' by Samuel Smiles, 2006.

back to john howarth