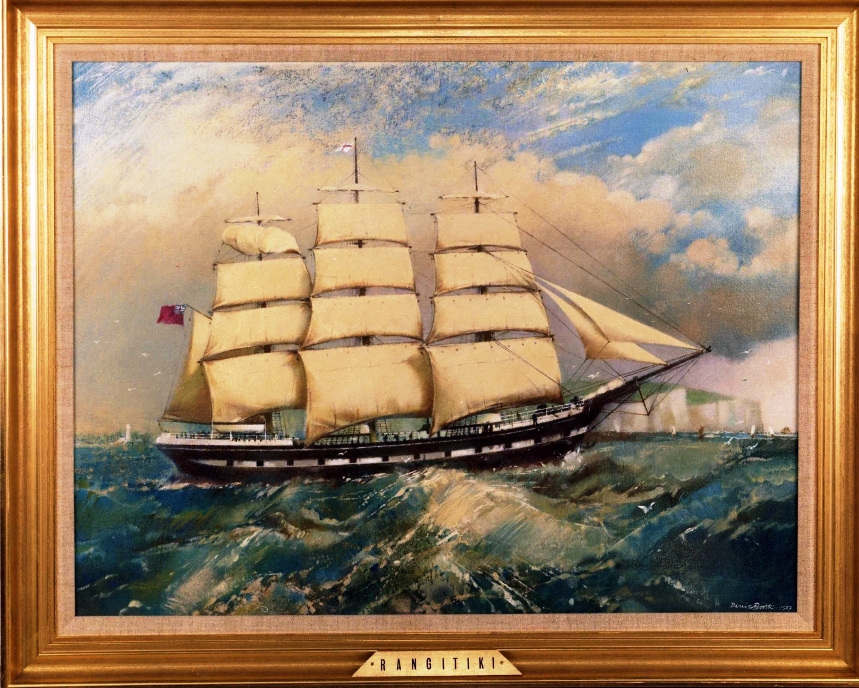 'The Rangitiki' painted in oils by Denis Booth was commissioned in 1987 by the Birchall family. This wonderful photo is available for reproduction with permission.

Denis Booth taught at Hull University and before he embarked on his art commission he researched the sailing ship 'Rangitiki' and the Hull shipbuilding firm of Martin Samuelson.

Her register was changed to Bombay by her owners and 0n 25th March 1871 she was sold to A H Campbell at London, and the same year resold to J K Welch, London.

Prior to the ownership of The Rangitiki by the New Zealand Shipping Company as 'Scimitar', a journey in 1872/3 was recorded in the Sailing Papers of Alexander Meadows in Calcutta. Sailing Papers were the documents that members of the crew received on discharge from the ship at the end of a voyage. Alexander Meadows (1845 – 1913) was born in Suffolk, served aboard a number of ships, both sailing and steam, during his younger days. Following his marriage he gave up the sea and ended up as a Greengrocer, owning two shops in Devons Road in Bow, London.

The Rangitiki was converted to barque rig in 1889 it was one of the largest ships owned by the company and a record pace maker, completing over 60 years in service and playing an important part in carrying immigrants to New Zealand. In October 1898 she was sold to A J Grefstad, Xiansand, Norway for £2,650. The ship was renamed 'Dalston' and eventually sold for £1,500 and went to Noumea, New Caledonia as a hulk.

The Hull firm of Martin Samuelson was a typical 19th century example of enterprise, success and demise. Samuelson himself was born in Hamburg in 1825, the son of a merchant with trading connections with Hull. martin became a ships engineer, in 1849 taking over the Scott Street Foundry in Hull and by 1853 was reported by the Bank of England agent to be doing considerable business. By 1854 he had gone into shipbuilding and in 1857 leased land along the Humber bank and in the following year he built a graving dock at the mouth of the confluence with the river Hull, on the site of the old Hull Garrison (part of the old city's river defences). By 1859 Martin Samuelson was well into shipbuilding and between 1854 and 1859 he built 40 ships. A Hull newspaper of February 11th 1863 describes the ceremonial launching and naming of four ships by the Lord High Steward, with a champagne breakfast laid out in great style - 'Countess of Ripon', 'Lightning', 'Earl de Grey & Ripon' & 'Belferine' ... but no mention of 'Scimitar'? His largest all sail ship by then was 'Knight Errant', 1218 tons, built for a Liverpool owner, his largest ship of all was the 2900 ton, 'Columbia', for the Atlantic Royal Mail Steam Navigation Company. By 1859 favourable reports on the progress of Samuelson's business were still being reported by the Bank of England agent and in 1864 Martin Samuelson & Company became The Humber Iron Works & Shipbuilding Company with an authorised capital of £1M.
In spite of the new capitalisation financial problems began to develop and to worsen rapidly. Bankruptcy followed in 1865 and the firm was wound up in 1866. The company had built 95 ships in ten years. Samuelson himself, never short of enterprise, and not a man to remain inactive, moved into river management and became the Surveyance Officer for the entire river Humber.

Samuelson died in 1908 at the age of 78 still in service to the Humber Conservancy Commissioners. 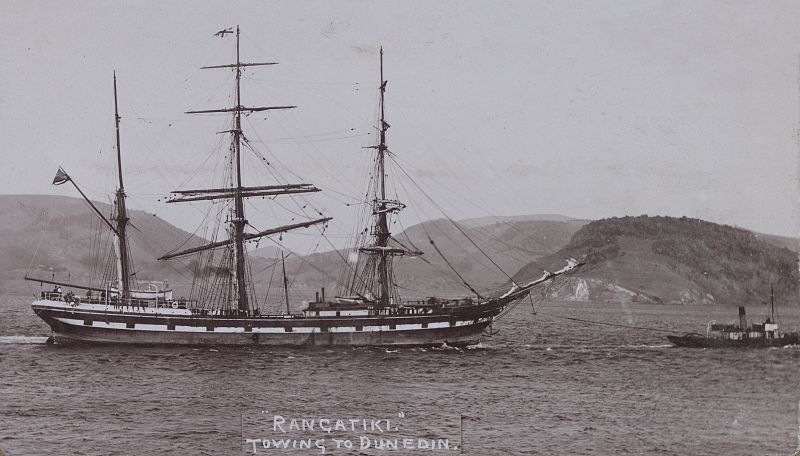 In 1924 some sensational runs of The Rangitiki' were described in by  Henry Brett in 1924 in his book 'White Wings'.

The Rangitiki featured in Alan Bott's book 'The Sailing Ships of The New Zealand Shipping Company, 1873-1900' written in 1972.

April 2nd 1975 was a memorable day for all sailors and philatelists. A set of six beautiful postage stamps depicting 'Historic New Zealand Sailing Ships' was issued in New Zealand. One of the ships was 'The Rangitiki'. The stamps were designed by Mr R M Conly of Christchurch and printed by Harrisons & Sons Ltd in England. Maurice Conly called on the Wellington Harbour Board Maritime Museum for much of the research and information he needed.

Perhaps the finest depiction of the Rangitiki under sail was of the painting by Stanley Pellet which resided in the London Office of The New Zealand Shipping Company  ... wow!

John Howarth was a passenger on 'The Rangitiki' which left Gravesend with emigrants for New Zealand on September 8th 1876 under the command of Captain Scotland, arriving at Lyttelton Bay on December 11th 1876.

John Howarth kept a meticulous dairy of his journey on the 'Rangitiki' which he published himself for the use and enjoyment of his family. 'A Voyage Round the World', a facsimile of this inspiring document is available for everyone at the Canterbury Museum, Christchurch, New Zealand. The narrative is seriously fascinating for all students of history & all folk interested in seafaring under sail or the ancient immigrant flow to New Zealand.

The accuracy of John Howarth's notes was confirmed by The Dundee Courier of September 11th 1876; in his dairy John wrote -

'Sept 8th - we spent the forenoon very agreeably in watching the sailors at work, and gazing on the constantly varying scenery on the banks of the river; at 10 am we passed Deal, Dover and Folkstone (sic) being passed soon after. Towards the evening a change comes o'er the the spirit of the dream; Mr & Mrs Willers are the victims of sea sickness and Mrs H looks as if it would be her turn next'!

The Cossar family travelled to New Zealand in ???? on the 'Lady Jocelyn', another good looking sailing vessel

The pioneering adventures of John Howarth (1852-1922) to the antipodes & back were both ambitious & courageous as confirmed in the context of the unimaginable sailing ship journeys to the unknown. Emigration to New Zealand in 1876 was no picnic. John's diary of the journey recorded the birth of Carole's maternal grandma ... Annie Mary Rangitiki Howarth (1877-1956) ... born on board the Rangitiki in 1877 ...

Family legend had it that labour was induced after Alice had been 'stroking' a furry bed fellow .... a large festering rat mistaken for the ships cat ... John's log was a little more circumspect -

The history of a Scimitar journey three years earlier, detailed in 'No Gravestones in the Ocean' by Michael A Beith was fascinating and instructive ... did John Howarth journey with his young wife in 'a floating pest house' ... flying a yellow flag? 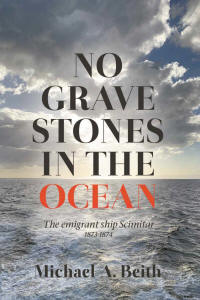 In March 1874 an emigrant ship arrived at Port Chalmers, New Zealand, triggering a series of events that ranged from a Royal Commission of Inquiry to demands for an explanation from the UK Secretary of State for the Colonies. For several weeks emigrant ships had been arriving in the colony with disease on board and having experienced significant numbers of emigrant deaths en route. The New Zealand media reported that the means of selection and conduct of the emigrant process in England was clearly at fault and demanded action.
The arrival of Scimitar flying the yellow flag, the international signal warning of disease on board, confirmed what they already feared – that yet another ship would be quarantined and her passengers and cargo detained at extra cost and with the risk of importing contagious disease to the young colony. There was also a reputational cost to be considered as New Zealand had embarked on an ambitious programme of expansion to its infrastructure which needed a large influx of immigrants and already incurring enormous loans to finance it. It had experienced difficulty in attracting immigrants in sufficient numbers and had just started to encourage agricultural and rural trade unions to assist in recruitment of suitable candidates.
Responsibility for emigrant selection and transportation lay with New Zealand’s first diplomat, Dr Isaac Earl Featherston resident in London. Since 1871, when he began his quest for emigrants, he had received frequent criticism of his management style and now he was firmly in the firing line to take the blame. His prime adversary in New Zealand was no less a person than the Premier himself, Julius Vogel CMG, architect of the expensive colony development plan.
This book examines the Scimitar story from before she set sail, including the daily account written by her captain, James Fox, full details of the Royal Commission of Inquiry and of the evidence submitted to it. The repercussions of the Inquiry’s conclusions resulted in a stream of letters and reports between New Zealand officials, UK institutions and others accused of hindering the safe passage of emigrants. The Commission’s report revolved around the evidence of Scimitar’s surgeon-superintendent, Dr. William H. Hosking, who contested the manner in which his evidence was used and recorded. The book reveals how the poor working relationship between Julius Vogel and Dr. Featherston delayed improvements to the emigration process.

'In the Wake of Endeavour, the History of the New Zealand Shipping Company' by Gordon Holman, 1973.

back to john howarth