The Swift family of Bolton were considerable engineers.

William Swift (1771-1837) baptised at Walton on the Hill in Liverpool. He was a Blacksmith when he first married Elizabeth Frances 'Betty' Greenhough (1773-1840) in Bolton in 1773 ... William and Elizabeth were married on month day 1793 at ? His occupation was Blacksmith, Engineer, Iron Founder, Coal Proprietor, Promoter of Bolton Leigh Railway, Purchased Acton Bridge Forge in 1833.

William and Elizabeth had 7 children: James Swift, William Swift and 5 other children.
Elizabeth died in 1840, at age 67.

Later in 1795 he married Elizabeth Parkinson? He had interests in collieries in Wibsey, Yorkshire? In 1870-72, John Marius Wilson's Imperial Gazetteer of England and Wales described Wibsey as a village and a chapelry in the Bradford parish of Yorkshire. Most of the inhabitants were employed in mines, iron-works, foundries, and worsted mills.

Ellen (1795-1870) baptised in Wibsey, Yorkshire. Father William was a Blacksmith. Married James Whitehead (-) a Calenderer & Cotton Bleacher, in Bolton in 1813. Their 2nd son Robert Whitehead was a famous engineer. Ellen died age 75 at Kersal in 1870.

Alice (1802-) baptised in Wibsey, Yorkshire. Married Isaac Thompson in Bolton in 1826. James Whitehead was a witness.

William (1804-) baptised in Bolton. William stayed in the Manchester and became the Manager of Richard Ormerod & Son, iron founders at Ayton Street, Manchester. It was here where his nephew Robert 'torpedo' Whitehead was apprenticed. In 1845 both Robert and his Uncle William went overseas to a shipyard in Marsailles.

James (1809-45) baptised in Bolton and moved to Acton Bridge with his dad in 1833 when William took over the Acton Forge.

William Swift died in Acton Bridge in 1837 he left a will. James Kaye & James Whitehead were trustees of his will.

William Swift (1771-1836) was a big man in Bolton who passed on his engineering passion to his remarkable family.

In an early partnership William was involved with Thomas & Samuel Thompson and Joshua Routledge, as iron founders & steam engine makers. The partnership, the Manchester Mercury noted, was dissolved in 1811.

William then became a partner in the Bolton engineering company Thompson, Swift & Cole, with premises at Hope Foundry, St George's Street, Bolton. The company had some difficulties in 1815 but in 1816 the London Gazette reported that the bankruptcy of the firm had been superseded. The company was listed in the Bolton trade directories of 1824. Their trade in Bolton was in brass & iron and, in Halliwell, delfmen & stone getters. William left in January 1833 when he purchased The Acton Forge and the partnership was dissolved; the firm continued trading as Thompson & Cole. They were still active in 1835 selling machinery from the Hope Foundry.

While in Bolton, William Swift was an enthusiastic promoter of the Bolton Leigh Railway. This railway opened in 1828 to break the canal monopoly and satisfy Bolton's increasing demands for transport. The new railway started at Great Lever near to the Bolton Bury Manchester canal and terminated in Leigh near the Leeds Liverpool canal.

George Stephenson did the survey, and the promoters were -

William Swift (1804-), eldest son William junior followed in his father's footsteps and became, perhaps, a more famous engineer than his father. William junior did not go to The Acton Forge with his dad and younger brother James, he joined Richard Ormerod & Sons, in Manchester.

Richard Ormerod & Sons was an enterprising firm of iron founders and in 1852 developed patented improvements to smoke control boilers at St George's Foundry, Minshull Street, Manchester. Patents continued to be filed in 1858/60.

In 1996 Norman Atkinson wrote of the famous engineer Sir Joseph Whitworth  ... 'his professional talents were instinctively steered towards Manchester's other leading engineers, William Fairbain, Richard Ormerod & Edward T Bellhouse and Richard Ormerod was arguably the most knowledgeable of the four on the subject of hydraulics' a notable association as 'Sir Joseph Whitworth (1803-87) was arguably Britain's best ever mechanical engineer, world famous for the standard screw thread named after him, machine tool designs so innovative he pioneered a new era, and his revolutionary hexagonally rifled guns. He also gave the western world its first one-inch standard, taught engineers precise measurement, decimalized engineering measurement, invented mechanical street sweepers, developed the hydraulic forging press, propagated the idea of mass production, founded the Whitworth scholarships for engineering science, set up a university engineering laboratory and helped to promote the Atlantic telegraph. Many of his machines and tools were exhibited at the Great Exhibition in 1851. Most of these achievements represent international firsts, yet Whitworth's prolific and fascinating career has received surprisingly little attention. In the first full-length biography to fully analyse his engineering and gun design, Norman Atkinson traces the development of Whitworth's career in the context of his personal life and the politics of his time'. 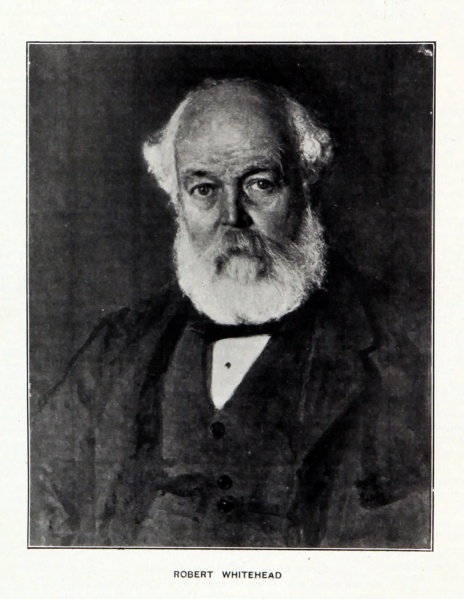 Robert Whitehead (1823–1905) was the 2nd son of William Swift's eldest daughter Ellen (1795-70) who married James Whitehead, a cotton bleacher from Bolton. Robert became a brilliant engineer famous for the development of torpedoes.

Robert Whitehead (1823–1905) was an English engineer, who in 1866 developed the first automobile or self-propelled torpedo, a weapon that proved decisive during both World Wars.

Robert was apprenticed with his uncle William junior at Ormerods, and later trained as an engineer and draughtsman at Manchester's Mechanics Institute.

In 1845 he moved with his uncle William to a shipyard in Marsailles where another Englishman Philip Taylor was busy. The Philip Taylor business was sold in 1855 and William moved to take up a post with the Egyptian Government.

Later Robert worked as a consultant engineer in Milan, and eventually he moved to Trieste, on the Adriatic coast.

In 1856 Robert's work was noticed by the founders of a metal foundry, 'Stabilimento Tecnico Fiumano' and he accepted the job of manager. He began producing modern steam ship boilers & engines for the Austro-Hungarian Navy.

During the early 1860s Robert contracted with the local engineer Giovanni Biagio Luppis to perfect Luppis' invention; a self-propelled torpedo. The weapon was a low profile surface boat, propelled by compressed air, and controlled by ropes from the land.

Robert's initial torpedo experiments were conducted with the help of his 12-year son, John, and a workman, Annibale Ploech. This resulted in Minenschiff, the first self-propelled torpedo, officially presented to the Austrian Imperial Naval commission on December 21, 1866.

The Austrian Gunboat Gemse was adapted for launching the torpedoes in the Fiume shipyard. This ship was equipped with a launching tube, which was Whitehead’s invention. But it was the depth rudder controlled by water pressure that proved to be Robert's most innovative breakthrough.

By 1870 Robert had managed to increase the torpedo's speed to 7 knots and it could hit a target 700 yards away. Although the the torpedo was promising, the company went bankrupt in 1873. Robert seized the opportunity, took the company over and transformed it into a private company which later went public as 'Whitehead & Co'.

The works were devoted solely to the construction of torpedoes. Whitehead's son John subsequently became a partner.

In 1890 a branch was established at Portland harbour, under Captain Payne Gallwey, a former naval officer, and in 1898 the original works at Fiume were rebuilt on a larger scale.

1911 Vickers bought the company from Whitehead family, so it remained in English hands till the beginning of World War I.

Robert was known to be paranoid about his trade secrets, and employees were often sworn to secrecy about the guidance mechanisms employed in the Whitehead torpedoes.

An Obituary appeared in The Engineer in 1905 -

Robert Whitehead produced the first dependable self-propelling and steering torpedo. At the age of fourteen he was apprenticed to his mother's brother, Mr William Swift, who was manager of the engineering works of Richard Ormerod, of Manchester.

In 'The Industrial Revolutionaries', 2007, Gavin Weightman suggested that it was William Swift (1804-) who showed Whithead the way.

In 1851 James had died and Ann was an annuitant, living at Smith Street, Kirkdale; with children James Adams; Elizabeth Ann; William, Thomas Walthew and Ellen -

James Adams (1834-), baptised at Acton Bridge, Weaverham; In 1851 James aged 16 was an apprentice Cotton Broker. In 1861 James Adams, unmarried, a Commercial Clerk, was living at 46 Rice Lane, Walton on the Hill with his brothers, William also unmarried and a Commercial Clerk, & Thomas also unmarried and a scholar. Still with them was servant Sarah Penketh (1823-) from Weaverham.

Elizabeth Ann (1836-) was baptised in Weaverham.

William (1838-), baptised in Liverpool, married Georgiana Mary Winterborn Walton on the Hill in 1866, they had two children Alfred William (1869-) and James Walthew (1870-). William was a Liverpool East India & China Merchant.

Ellen married Edward Molyneux in 1866. Edward was an accountant and son of Hugh Molyneux, Gentleman. Edward became a member of The Liverpool Stock Exchange. They had no children.

So did the Swift family buy the Acton Bridge Forge for the second son James, as the eldest son William retained Folds Road, Bolton? And why did James' three sons end up in Liverpool in 1861? The Swift family sold the factory sometime before 1843?