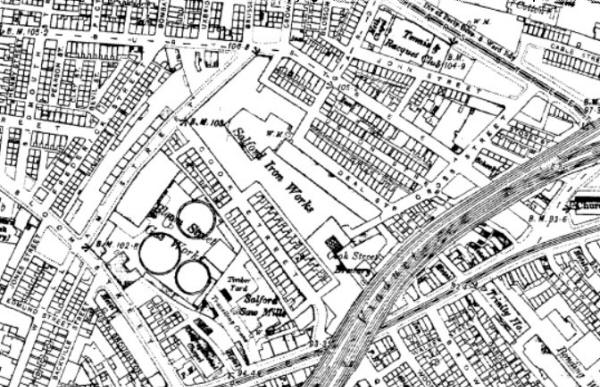 The Salford Iron Works was part of a proud history of the industrial revolution in England and a famous company; Mather & Platt ... a history that was expertly written & illustrated by Marcel Boschi ...

In 1718 the Vale Royal Company built a forge at Acton Bridge which was probably operational until the collapse of the iron industry around 1737 when bar production in Cheshire almost halved.

The Acton Forge disappeared into the mists as the industry switched to coal which led to the demise of the Vale Royal Company. However from 1734 Acton Bridge was on the Weaver Navigation which alleviated the transport difficulties.

It was not until 1800 that the Acton Bridge Forge was mentioned in the Minute Books of the Navigation Trustees and around that time the Ryders had expanded their facilities at Marston and taken over at the forge at Acton. In 1772 Thomas Ryder (or Rider) at Scotland Bridge, Red Bank, was the only iron foundry appearing in the first Manchester Directory.

'James Bateman appeared in the Manchester directory for 1773 as an ironmonger in Deansgate. By 1781 he was also in Salford and in 1788, he was listed as James Bateman & Co, ironmongers, Deansgate; iron founder, Water Street, Salford; iron forger, Collyhurst; and iron founder & forger, Dukinfield. It was during the latter part of this period that Bateman began his association with William Sherratt, who was first mentioned as the contact at the Dukinfield Furnace.
The firm's application of iron to new structural purposes was illustrated by their making a large 'circular iron weir, near ninety feet span', cast at Dukinfield Furnace, for John Arden Esq, near Stockport, and said to be 'the first of the kind ever made in this kingdom … it will be found more durable and cheaper than either wood or stone.'

1789 The Derby Mercury reported on the weir at Stockport built for John Andrew.

In January 1782 James Bateman, Iron-Monger, Deansgate, Manchester, inserted a long advert in the Manchester Mercury, to acquaint his Friends and the Public that he had lately begun to manufacture an astonishing variety of cast iron goods -

'By 1791 Bateman & Sherratt were operating a firm of considerable size, using power-operated lathes and boring engines in the manufacture of textile machinery, steam engines, and a wide range of other products. They had purchased additional land on Hardman Street, Salford, for the establishment of a new iron foundry, which would extend their capacity considerably. This was the site that was to become the Salford Iron Works'.

William Sherratt was an engineer of considerable ability, particularly in the manufacture of steam engines. In his revered book, 'A Description of the Country to Forty Miles Round Manchester', published in 1795, John Aikin made the following observations -

'A considerable iron foundry is established in Salford, in which are cast most of the articles wanted in Manchester and its neighbourhood, consisting chiefly of large cast wheels for the cotton machines; cylinders, boilers, and pipes for steam engines; cast ovens, and grates of all sizes. This work belongs to Bateman & Sherrard ... Mr Sherrard [sic] is a very ingenious and able engineer, who has improved upon and brought the steam engine to great perfection. Most of those that are used and set up in and about Manchester are of their make and fitting up. They are generally of small size, very compact, stand in a small space, work smooth and easy, and are scarcely heard in the building when erected. They are used in cotton mills, and for every purpose of the water wheel, where a stream is not to be got, and for winding up coals from a great depth in the coal pits, which is performed with a quietness and ease not to be conceived.'

In the same book Aikin also revealed a link between Bateman & Sherratt and the original Iron Bridge, built by Abraham Darby III in 1779, when he wrote -

'The quantity of pig iron used at the different foundries in Manchester within these few years, has been very great, and is mostly brought (by canal carriage) from Boatfield and Co's iron furnace, Old Park, near Coalbrook Dale; and Mr Brodie's furnace, near the Iron Bridge, both in Shropshire.'

In 1791 Bateman & Sherratt set up the Salford Iron Works to the north east of Quay Street, on Cook Street just north of the Lowry Centre.

The Salford Iron Works became one of the largest manufacturers of cast iron products and stationary steam engines, outselling even Boulton & Watt of Birmingham. They manufactured the first marine steam engine. Their machines powered the cotton mills that were rapidly making Manchester the world's first industrial city.

Bateman & Sherratt were competitors with the legendary firm of Boulton & Watt, who had taken the performance and efficiency of the steam engine to new levels with their double acting rotative engine. Initially the relationship between Boulton & Watt and Bateman & Sherratt was amicable enough and Watt drawings were used for the first steam engine produced at Salford. In 178? both firms competed for the sale of an engine to Peter Drinkwater for his Manchester Mill and the first application of rotative steam power for cotton spinning. Drinkwater would have nothing to do with the Salford engine. However this was a competition that the Salford firm appear to have eventually won in the Manchester area, although they were later found guilty of infringing several of James Watt's patents when the Birmingham firm secured an injunction against them in 1796.

Bateman & Sherratt made some of the earliest marine engines, one of which, it is said, was fitted into a barge on the Bridgewater Canal in 1794. In 1799 another was made for a boat nicknamed Bonaparte, designed by the celebrated Robert Fulton. This was built in the Duke of Bridgewater's yard at Worsley for hauling coal barges on the canal to Manchester. The boat proved to be a failure, but the engine and boiler apparently had a long and useful life, for various industrial purposes, until 1851.

With the expiry of Boulton & Watt's patents in 1800, Bateman & Sherratt were able to develop their business vigorously and, perhaps because they made all the components in their own works, they had a reputation for speedy delivery and erection. Coupled with their lower initial cost, this must have helped them to maintain an advantage over Boulton & Watt in the Manchester area and there is no doubt that the firm prospered.

By 1829 only the Sherratts were active at the Salford Iron Works. John & Thomas Sherratt described themselves as 'brass founders, engine makers and iron founders'.

Few facts about the history of the Salford Iron Works from 1800 to 1837 are known but the works had grown to cover nearly 6,800 square yards, including pattern rooms, casting shops, smiths' shops, fitting-up shops, engine house, gas house and gasometer, crimpers' shop, brass foundry and several other workshops'.

However during this halcyon period the Acton Bridge Forge was purchased.

(NB After Thomas Sherratt's death in 1837, his trustees sold the Salford Iron Works to John Platt, who later, in 1845, leased part of the works to William & Colin Mather. In 1852 Colin Mather ('Cast iron Colin') entered into a partnership with William Platt, son of John Platt, the latter having died in 1847. This was the beginning of the company Mather & Platt. The company retained the name of the Salford Iron Works and it continued as their home until the new Park Works was opened at Newton Heath, Manchester, in 1901. Over the next three decades Mather & Platt gradually severed their ties with the Salford Iron Works site and when they completed the transfer of the heavy Iron Foundry to Park Works, in 1938, the premises were sold to Threlfall's Brewery.)