This is an initial draft of a story about the family history of my ancient ancestors in Cheshire ... they were into cheese making & potato farming ... and we guess for Cheshire folk from way back, such connections were universal ... there are still many errors, omissions and inaccuracies in this yarn ... perhaps someone will make some welcome corrections? 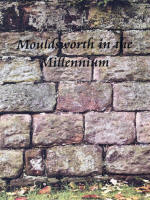 General View of the Agriculture of Cheshire - Henry Holland 1808

How the Potato Changed the World’s History - W McNeill 1999

The Untold History of the Potato - John Reader 2009

Cheshire Spuds were for the workers, Cheshire Cheese was for the toffs in London?

We had read the books and enjoyed the banter and, over the years, had devoured our fair share of the earthy spoils. But it was scrumptious Cheshire cheese that excited the Gandys and the humble spud was all but a footnote ... until Lockdown @ The Meister from March 17th 2020 ... lockdown offered a serendipitous opportunity to explore more of our Hindley Family History ... and delve deep into the Ancient Trade & Crafts of Rural Cheshire. Although the Birchalls ended up close to salt & the eastern mills, the Hindleys never strayed far from the farms making crumbly cheese ... & growing potatoes.

Mouldsworth proved to be an idyllic rural retreat for indulging in the exotic charm of ancient Chester, with easy commuting to the Warrington Factory, just a short crawl back from The Goshawk, theraputic attention to the secret delights of gardening, daily walkings round the Mouldsworth/Manley village block ... with & without our faithful mongrel hound. During Lockdown these daily brisks monopolised social activity as beer, bridge, music & pubs were forbodden. The surviors, residents & excersiers who assembled down Mouldsworth Road and around the Manley village introduced us to the ghosts of the potatoe farmers from the past. Then as Poplar Grove Farm was demolished, and as new units grew from the rubble to add to our local silicon cluster ... old stories and yarns from the farming past recounted by Esme Turner & Frank Taylor ... and Uncle James Greenway were rekindled in our memories ... and introduced us to all the local farmers who seemed to embroil themselves in spuds rather than cheese and still managed to find time to shower attention on the farmer's daughter from next door - 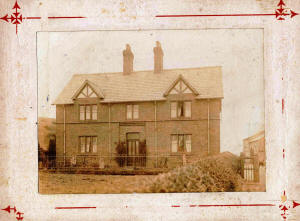 At Cliff Farm, Alvanley, just up the road from the Mouldsworth Gap on the Sandstone Trail, Uncle James Greenway (1917-96), was a big time potato grower. Tithe Maps of 1845 identified Cliff Farm, Alvanley, in Frodsham Parish, Plot No 366, owned by the Trustees of the late John Arden (Edward Lord Skelmersdale, Wilbraham Egerton & Randle Egerton) and occupied by Samuel Greenway? Our old and new families spent hours underneath the Alvanley Cliff with the rabbits, pikels, tractors & spuds over looking the lucious Cheshire plain to the Welsh mountains ... an ideal spot for launching our model sailplanes ... and Auntie Clare's food was perpetually scrumptious ... Uncle James talked a lot about potatoe growing, milking cows and driking beer at the 'Belle Monte' in Frodsham where he discovered a radiant Clara Newton neé Hindley helping out behind the bar ... but Uncle James didn't talk much about family ... we hadn't a clue about a guy called Samuel Greenway who was his great grandfather? 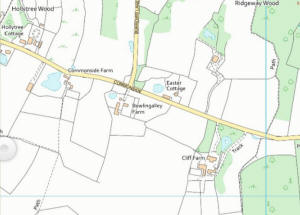 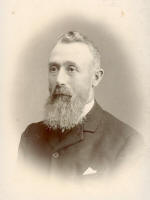 Ruth Greenway (1908-2006)
married William Henry Warburton junior (1911-85) Depmore Farm, Depmore Lane, Kingsley, March 1942.
Ruth resided at Cliff Farm Alvanley prior to their marriage while William Henry Jnr was at Depmore Farm, Kingsley.
Not sure if, or to where, they moved after they married. Depmore is still owned by Warburtons. The brother of William Henry Warburton junior (1911-1985) was Thomas Warburton (1895-1966) married Emily Fletcher (1901-1986) with son Thomas Lionel Warburton (1928-1994) who farmed at Hatley House Farm, Frodsham and daughter Nesta Warburton (1927-).
Thomas Lionel's sons still run the same farm where, among other items they grow 'Warburtons Cheshire Potatoes; Grown under Frodsham Hill'.

The Rutters, Hassalls, Nodens, Wrights, Warburtons and Fowles were all local farmers ... and all seemed to be interbred thoroughbreds of immaculate pedigree.

It looked like the Greenways made a propitious choice when Ruth married into the Warbuton family in 1942 ... 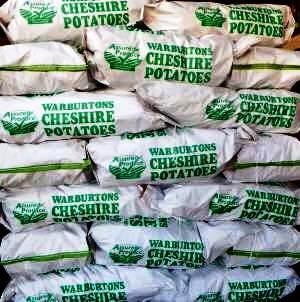 Everyone around Frodsham, Kingsley, Alvanley & Mouldsworth knew the local Warbies ...

The Warbies of Weaverham, from our neck of the woods, were brilliantly untangled with hours of scholarship, starting from a 1734 Latchford lad to the Greenways in 1942 - 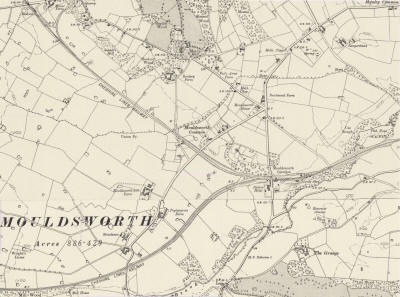 The Mouldsworth farms on the old Mouldsworth Road (Smithy Lane today) were in the middle of all this action ... and the census told the story.

Bank Farm at the bottom, then Stone House Farm, Poplar Grove Farm, Mouldsworth Hall and at the top Beechwood Farm which was to become Birch Farm around 1914. 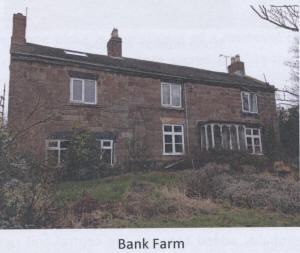 Bank Farm - south on the OS map closest to Ashton Brook border ... the oldest parts date back to 1600s.

Next at Mill House down by Ashton Brook was Thomas Wright (-) aged 40 from Little Barrow, a Labourer.

Then at Mouldsworth Hall was Joseph Waring (1837-) aged 64 Farmer from Wath, Yorkshire with 3 daughters and a son. 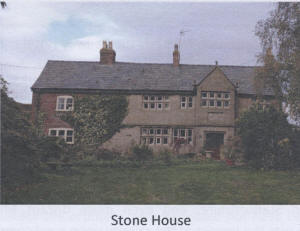 Village crack - Wrights were there in 1901. Wright's only had milk and grain, no potatoes. Wrights were from Dunham-on-the-Hill, Hapsford Hall, Alvanley Hall settled in Mouldsworth and married into the area - Carters, Sherlocks, Wades, Stretchs ... then Challoners. Mary Wright was the widow of Sam Wright and Edwin bought Stonehouse in 1900. Sam may have done so before he died. Maybe Stonehouse was purchased for great grandmother, born Anne Ellis (1869-) 1869 Chester. Anne had three husbands - Read, Sherlock, Wright. Married in 1900 ? and she brought with her a family of orphaned children, the Sherlock children and the son of her first husband. They may not have all come to live  at Stonehouse but for the next 70 odd years they and their descendants came to Mouldsworth for holidays.

The Frodsham Wrights went something like this ... but how were they connected to the Warrington Wrights?

Edwin Wright (1852-1929) baptised
married Anne Sherlock neé Ellis (1859-) 1901 Chester, born in ? lived in Ince, Helsby and Dutton, before living at Hapsford Hall with her parents. Dad John Ellis (1833-) came from well off farmers and he inherited a farm from his mother's relations who were all unmarried and for whom he had worked as an agricultural labourer. Tragedy struck and Anne Ellis' mother Ann Ellis neé ???? (1836-) died a month after Ann's youngest sister was born and Ann was recalled from boarding school to help look after her younger siblings.
Anne Ellis (1860-) first married Samuel Read (1847-) from Ince & 12 years older. He died soon after the birth of his only son also called Samuel Read (-).
second married Joseph Sherlock (-) farmer at Swinford House Barrow widower with at least 5 children of his own ... plus her own young son Samuel Read (-). Anne was hands on at Swinford House Farm and seems to have thrived on hard work. After only four years of marriage with Joe Sherlock they had 4 children. Joseph died 2 months before their daughter Ann was born.
But Anne picked up the pieces and ran the farm from 1888 to 1900 (1901) with help from farm servants named in the 1891 Census. That also shows she had sent young Jack Sherlock (14), to live and work at Swinford Mill Farm Barrow, with Daniel Wright, possible a cousin, and his wife Alice.
third married Edwin Wright (1852-1929)
Edwin purchased Stone House Farm in 1900
died 5 Feb 1929 ... probated ...

Maggie Wright (1869-) 1901 at Stonehouse ... engaged to be married and become the second wife of Edward Stretch, tenant farmer of Beechwood Farm, later renamed Birch Farm.
Maggie & Edward Stretch moved to a Manley Farm and then on to retire in Helsby. 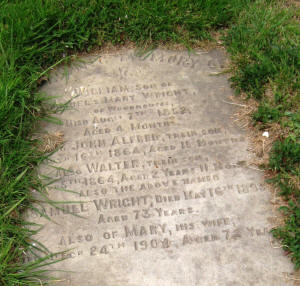 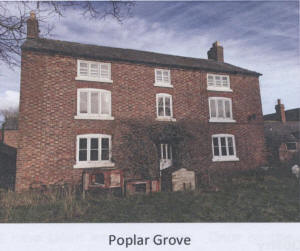 Village crack - Major Ernest Johnson (1945), Lea (?), Piddington (2010) - they had Potatoes and grain only, plus swedes, both Pinningtons and the previous owners, the Lee's. Major Ernest Johnson and his wife, Violet, came to live at Ashton Hayes House and like many tenants on the Ashton Hayes Estate, they decided to purchase when the opportunity arose in 1923.
Shortly after the Second World War the Johnson family moved out to Poplar Grove Farm in Mouldsworth to allow their home to be used as a convalescent home. 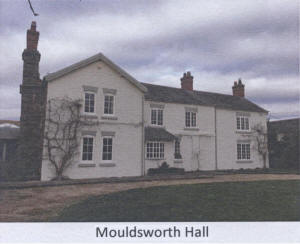 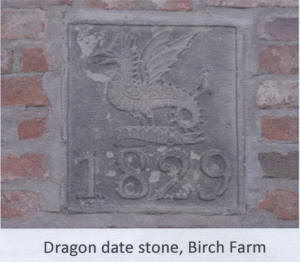 Birch Farm - neé Beechwood Farm, at one time hosted a mill down by Cat Rough? Sherlocks were there at the millennium ...
Village crack - they had milk and potatoes, and also an Irish man working there permanently who was a great help, especially at potato harvest time. His name was Jack Walsh and he lived in a caravan on the farm. None of these farms did cheese making that can be remembered ????
Edward Stretch was at Beechwood Farm as a tenant farmer, from 1914 Grandpa Sherlock took over and then bought it in 1924 when The Parr Estate gave tenants first refusal to buy. Originally Beechwood Farm, became Birch Farm in 19?? when a row of splendid Birch trees were planted.
Sherlock family line of farmers & market gardeners came from Manchester to Utkinton, Barrow and then Stonehouse.
Through intermarriage the farmers were said to be related to almost everyone in the village.

Joseph died 1888 Swinford Farm Barrow ... leaving Ann Ellis with a farm and a lot of kids!

back to Edward Hindley