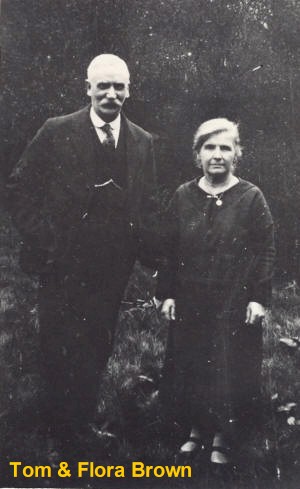 Thomas Brown (1871-1941) was employed at the Meggitt Factory at Sutton-in-Ashfield. It was a steady job that paid well and Tom encouraged his only son Ted to join the company and learn a trade as a fitter turner.

Tom was the eldest of nine children and was palmed off by his parents because the house was overcrowded. He was not found in the censuses after he was a baby until he was grown up. Tom’s father, Tomas, was an iron moulder from Mansfield. His father Jabez was a bleacher also from Mansfield.

In 1888 Tom married Flora Ackrill at the United Free Methodist Chapel in Mansfield. Tom worked his way up. In the 1891 census he was a General Labourer, in 1901 a Ware Houseman at the glue works and in 1911 a Glue Boiler. And at the time of son Ted's wedding in 1919 Tom was a Foreman.

Ted's apprenticeship indenture was drawn up in 1909 and makes fascinating reading; a commitment to hard work, honesty & thrift by father, son & company. In the 1911 census Ted was a 'Fitter Turner'.

In 1914 Ted joined the Army as a Private and on December 14th of that year received Christmas greetings from his old work mates at Meggitts, organised by Walter Hole, the Works Manager. An inspiring and reassuring message from home!

Another souvenir from Ted's days at Meggitts has somehow survived the ravages of time ... a compliments card ...

Ted was demobbed in 1919 and the same year he married Florence Ellis at Kirkby.

Tom also did his bit for the Meggitts war effort; he was secretary of the employees war savings association! Robert M Kindersley, 1st Baron Kindersley, was Chairman of the National Savings Committee 1916-20. 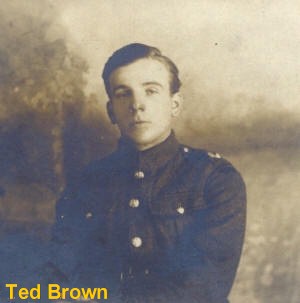 Shorty afterwards, father & son both left Meggitts and Sutton-in-Ashfield for a new  challenge. Tom knew all about glue making; upwards, backwards & inside out and Ted was a skilled practical craftsman ... and Messrs G A Shankland, a glue company in Eynsham in rural Oxfordshire, were embarking on a new factory development.

What was this project all about and what was the nature of the tie up between Meggitts and Shanklands before both companies ended up as parts of British Glues & Chemicals?

The sequence of events started in 1913 with German investment and a controlling interest in old established Samuel Meggitt & Sons. During the war, along with many other German interests, the company was taken over by the Controller of Enemy Businesses and a new company formed; Meggitts (1917) Ltd. The Directors appointed to the new company were R Duncalfe, J E Grimditch, V H Poynter, E H Quibell and G A Shankland ... all were well respected leaders from other British glue & gelatine companies ... clearly Gilbert Archibald Shankland was a Director of Meggitts in 1919 when Tom & Ted Brown moved to Eynsham to build the new factory at the old mill on the Evenlode.

G A Shankland Ltd was a new company formed in 1919 ... it seems Tom & Ted were 'head hunted' by their own boss to establish the new facilities at Eynsham Mill! 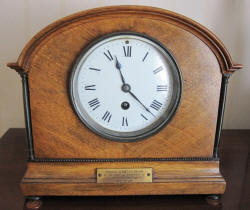 When Tom left Meggitts he was presented with a magnificent clock, still going strong today, bearing the inscription -

It seems Shankland and the Browns left Meggitts for the new venture on amicable terms because the project went well and after two & a half years Ted received glowing testimonials from both the Meggitts, Works Manager, Walter Hole, and the Shanklands Chief Engineer, J T Wilson.

In 1922 the Enysham period came to an end. Tom returned to Meggitts at Sutton-in-Ashfield to train up a Frenchman in the arts of glue making (according to the reminiscences of one of his daughters in 1977). Next he worked for three months in the North East of England, almost certainly at the Tees Refining Company at Thornby. The family lived at Yarm during this brief sojourn on Teeside. Tom then moved to Northamptonshire for a short time, probably to work with Charles Massey at Market Harborough. By this time both these firms, together with Meggitts were part of British Glues & Chemicals.

Ted, who now had a baby son. Edward Gordon (1920-1980), born in Eynsham, took up employment at Peter Lenton's potato factory in Nuneaton, Warwickshire. Perhaps he was looking after the machinery or maybe using his WW1 aquired lorry driving skills? He lodged with his sister and brother in law in Hartshill.

From Northamptonshire Tom moved to Rusholme, Manchester. He was joined by his son Ted in 1923

Ted's daughter, Cynthia was born in 1928, and at 84 Cynthia still remembered the old days in Manchester. Her dad and grandfather both worked in a glue works in Red Bank (behind Victoria Station). Tom was in charge of the glue making and Cynthia inherited the book on the recipes. She always regretted having later disposed of it. Ted was responsible for keeping the machinery going and was often called out when it broke down. One of Ted's sisters, Olive, worked there for a while also until she returned to Nottinghamshire to work in the lace industry.

Cynthia had visited the factory on a number of occasions and remembered it being in very poor condition, accessed by a wooden staircase without handrails. She always thought the factory was part of Meggitts and it was referred to as such at home.

She does not know why the family moved to Manchester from Eynsham, after pausing briefly at Hartshill. There was no family connection in Manchester, and it might have been expected that they would have returned to Nottinghamshire after the Eynsham episode? Perhaps there was some Meggitt connection which took them to Manchester certainly the glue works was always known as 'Meggitts' in the family.

Ted was sent to Cortaulds in Trafford Park during WW2 but Cynthia remembered someone from 'Meggitts' coming round to the house after the end of hostilities to invite him back.

Eventually, the glue works replaced Ted with a younger man after he had returned from an assignment to buy 2nd hand machinery. The new man had persuaded them they should be buying new.

There was only one reference to the glue works in Cythia's records and that was an address, C H Smith, Hargreaves Street, Red Bank ... the address was written on the back of a letter written to advise Ted and Florrie of the death of her mother. Elizabeth Jane Ellis, Florrie's mother, who died on 10 April 1929.

back to British Glues & Chemicals