In 1849 the Manchester Courier advertised the zinc wares of Richard Lloyd & Company, Acton Bridge. Had John Budd left the operations at Acton Bridge to his leading hand a blacksmith from Cardiganshire?

The 1853 Gore's Directory of Liverpool indicates Richard Lloyd was in partnership with W E Maude, a Liverpool merchant and commission agent. Maude & Lloyd had offices in Peel Buildings at 3 Harrington Street. Although John Budd was still in the metal broking business at this time, it seems he sold the Acton Bridge Rolling Mills sometime between 1843 and 1850.

It seemed that William Edward Maude bought the factory and teamed up with managing technical partner Richard Lloyd.

But who was Richard Lloyd? 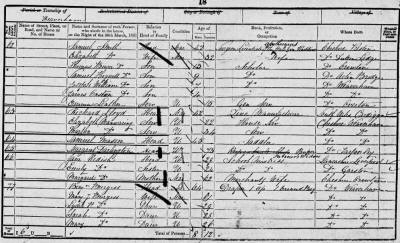 The 1851 census listed a Richard Lloyd (1809-) living at Gate Inn, Weaverham and identified by a transcriber as a 'Line Manufacturer'? However when the entry was inspected diligently ... 42 year old Richard Lloyd was born in Cardiganshire, married and occupied in work as a Zinc Manufacturer. This was confirmed on The Cheshire Electoral Roll of 1851, 'Richard Lloyd, Weaverham, Acton Bridge Zinc Works'. This suggested a birth date of 1809?

When & why Richard came to Acton was not clear? Why did he leave his family behind in Llanbadarn leaving Jane alone and tempted by a young buck from the lead mines with bulging biceps?

Was he recruited by John Budd? When did William Maude get involved?

Certainly after the court case John Budd's relationship with his partner would have been been shattered and the source of investment funds from the Ewbanks would have dried up. Clearly the prospects for the business were bright, why else would the Ewbanks try to give young Cooper full control?

Richard Lloyd had the technical expertise and William Maude, from a banking family, had the capital for investment ... however the initial trading appeared to be under the sole name of Richard Lloyd & Company.

An advert in 1853 Gore's Directory raises the suggestion that Maude & Lloyd were now sourcing their spelter from Silesia. For sure the Liverpool merchants were focused on international trade and sourcing their spelter from wherever and whenever a profit could be made. It seems the opportunity seized by William crockford in Flintshire was under almost immediate threat from imports. Technology spreads rapidly, patents only last for 15 years and then only if they can be enforced ... its seems comparative advantage was rapidly moving away from the extractive industries to manufacturing, and by 1850 England was leading the world in manufacturing technology.

A dusty report from the law times indicated William Maude & Richard Lloyd parted company in 1854 ... the Liverpool Mercury confirmed the dissolution of the partnership in 1855 ... it looked like Lloyd left the Acton Bridge interest to Maude, I wonder why?

After the dissolution an advert appeared in The Cheshire Observer - warehouse facilities on the Acton Bridge wharf suitable of corn or cheese factor, complete with crane & weighing machine - offered for letting ... ?

Interestingly there was an alternative Richard Lloyd & Company, mill furnishers from Birmingham, who could have purchased and modernised the Acton Bridge Mill ... but there is no supporting evidence?