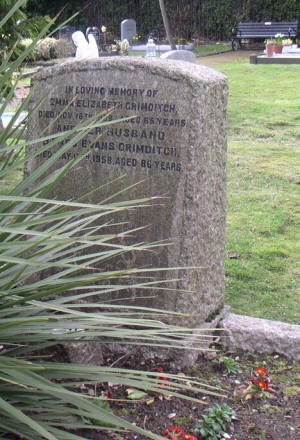 In 1882 young James Evans was a pupil at Soham Moor School in Ely.

In 1900 James was in partnership with his Dad in butchers shops at Hersham, Chertsey, Cobham and Sunninghill under the style of W J & J E Grimditch which were dissolved ... to prepare for his investments in Liverpool? or his Dad's retirement? or a new business arrangement? ... whatever the reason, the J E Grimditch chain of shops continued to trade.

In 1902 there was trouble in Liverpool and an opportunity in animal product waste which James knew all about ... there was money in waste.

On March 28th 1906 The Anglo American Cattle Products Co Ltd was incorporated to acquire and take over the existing business at 81 Dale Street, Liverpool to buy, sell, import, export & deal in animals alive or dead and all kinds of meat. An international meat merchant business with 10,000 £1 shares and seven subscribers of 1 share each -

The directors of the firm were James Evans Grimditch, his wife Emma Elizabeth, both resident in Rosemont Philadelphia, USA and Mr Alexander Joseph Antoine of 40 Fazakerley Road, Liverpool as Manager.

The Memorandum of Association makes it clear that the strategy of the business was inexorably tied up with the exploitation of the carcase by-products. Mentioned particularly are serum albumin, pepsin extract & pemmican . These were sophisticated high value products and clearly Grimditch was operating an ambitious import/export company focused on trade with North America. In 1906 Princes Buildings, 81 Dale Street, Liverpool, L2 2HT was a majestic five storey red brick office block in the port of Liverpool with retail use on the ground floor and offices above. It was built in 1882 by Henry Shelmerdine as shops, offices and leather works.

Two of the subscribers acted for the company - F W Knibb as Secretary and W J Glass as Auditor.

On the 12th of October 1908 a special resolution was passed changing the Articles of Association to enable Grimditch to take out a £5,000 debenture prior to liquidation. Anglo American Cattle Products Co Ltd was wound up voluntarily following an Extraordinary General Meeting on November 6th 1909 and finalised on July 28th 1910.  (National Archives BT31/11456/88/27)

It appeared James Evans Grimditch had secured a more profitable investment in The Weaver Refining Co Ltd. Interestingly Grimditch also invested in a Nottinghamshire company, Samuel Meggitt & Son, later Meggits (1917) Ltd, who were also involved in the cattle products business, and also involved in a future merger with The Weaver Refining Co Ltd in 1920.

As a supplier of bones, and perhaps other materials, Anglo American had also had connections with Meggitts for some years prior to 1919. Bones were available from the several butchers shops in Surrey and James was know to have had an abattoir in Hersham at one time. Obviously purchases were also made in Pontefract so it is likely Anglo American were extensive suppliers of materials to the bone crushers. And perhaps importers via Arthur H Brandt & Co?

'The Chemical Trade Journal and Chemical Engineer: A Weekly Newspaper Devoted to the Commercial Aspect of the Chemical and Allied Industries, Volume 73, G Kelville Davis, 1924' reported that the Anglo American was now incorporated and continued in business as cattle product merchants and edible oil manufacturers at 3 Castle Street, Liverpool.

There was a record of the Anglo American Company dissolution in 1949.

In 1908 when The Weaver Refining Co Ltd was incorporated Grimditch had returned to England from The Anglo American business in Philadelphia and was living at Hersham Green, Walton on Thames where his wife Emma Elizabeth was born in 1874. Emma died in 1939. 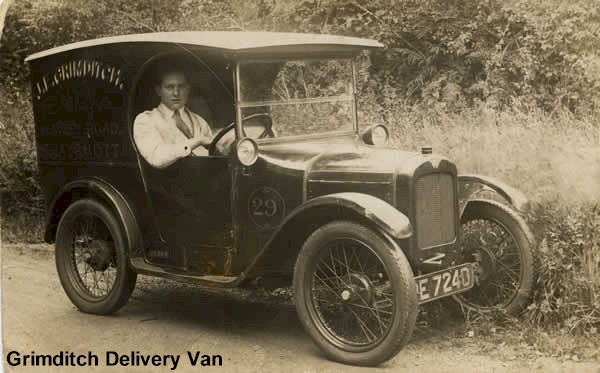 The 1911 census revealed that James Evans, 39 years old, was living with Emma at Hersham Road, Walton on Thames. He was still in the butchery business with a chain of shops that now included one at Headley Road, Grayshott in Hampshire. It seems his shops used the old faithful Austin 7 Chummy delivery vans ... 747cc 10hp side valve 4 cylinder engine, a 3 speed center change transmission and 4 wheel cable operated brakes!

From The Grayshott Village Archive - J E Grimditch’s butchers shop was in Headley Road, always a butchers shop dating from about 1900, the previous occupier being Henry Mitchell and today it is Kaighin and Daughter. The delivery van is a Austin ‘Chummy’ first registered in January 1926. Of interest is the fleet no ‘26’, although business in the 1920’s would have been brisk supplying the hotels and similar residential establishments in the district I am sure the fleet did not reach 26 vehicles, was this shop part of a chain owned by Grimditch? Later it became part of the William Hill chain of butchers shops.

In 1919 The Chemical Trade Journal and Chemical Engineer: Volume 64, G Kelville Davis reported -'Bone Prices - Before Mr Justice Roche at Liverpool Assizes, on Thursday the Anglo-American Cattle Products Company, Liverpool, sued Messrs Samuel Meggitt Ltd, Sheffield for damages for conversion of goods.
The parties have had trade relations for some years and are extensive buyers of bones and similar products. In February last the plaintiffs made purchases at Pontefract and owing to a mistake on the part of the railway company over 81/2 tons of bones were delivered by mistake to the defendants at Sheffield. The mistake was not discovered for three weeks and when the plaintiffs, who had bought at £22 per ton were asked by the defendants what the sale price would be, they quoted £10 a ton and offered either to accept the return of the goods or a similar quantity. The defendants declined to buy at the figure named and did not supply an equivalent quantity. They paid into court a sum representing a purchase price of £25 a ton.
Mr Justice Roche said there was no doubt that the prices advanced considerably after the defendants obtained possession of the goods. He found for the plaintiffs on the basis of £35 per ton. Judgment was given for the plaintiffs for £275, with costs'.

What was happening here? Anglo American was wound up in 1910? Later in 1920 both Grove, Meggitts and James Evans Grimditch ended up immersed in British Glues & Chemicals?!

James Evans had his fingers in may pies. The Smithfield Animal Products Trading Co built a factory in Marshgate Lane in 1920. It later became part of the Smithfield & Zwanenberg Group Ltd.

The venture was reported in The Chemist & Druggist: Volume 92, 1920 - Objective: to carry on, among other things, the business of manufacturers of and dealers in animal or poultry foods and medicines, manufacturing chemists, manufacturers of meat and other extracts, glue, gelatine, etc. The first directors are: J E Grimditch, A E Pitt, A Dalley, and V H Poynter. Head Office: Marshgate Lane, Stratford.

In 1918 meat rationing proved to be an inconvenience for butchers in Surrey and J E Grimditch suffered.

In 1941 a newspaper report outlined a problem for the Countess of Onslow and her meat ration from a Grimditch shop!

The Grimditch Hersham shops were probably sold to, or merged, with another local butcher, Robert Walsey. In 1919 a note in The Cornishman revealed Robert Wasley was in trouble with the meat rationing system ... a butchers lot was not a happy one! In 1940 a newspaper report confirmed Robert Wasley as a limited company, was operating the Hersham shops? The shops as robert wasley ltd were liquidated in 1965, with J Grimditch as Chairman?

James Evans Grimditch died at Putney Heath in 1958 at the ripe old age of 86. In 1961 The Times of London reported he left an estate of £314,058 some £16 million in today's money as a share of GDP. His investments in cows had proved to be propitious!

back to weaver refining company