I keep these notes on my server so I don't lose them !! 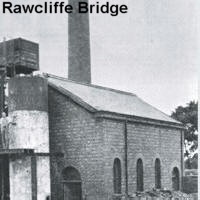 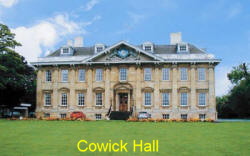 1955 - HQ at Cowick Hall, Snaith, Goole. Goole is a town, civil parish and port located approximately 45 miles inland on the confluence of the rivers Don and Ouse in the East Riding of Yorkshire, England. The port is 'highly versatile', and is capable of handling nearly 3 million tonnes of cargo per annum, making it one of the most important ports on the east coast of England. Goole is south of the M62 linking it with Kingston upon Hull in the east and the West Yorkshire urban belt in the west. The M18 runs west of the town, connecting it with South Yorkshire, the South and the Midlands. Goole also has a railway station with services to Hull Paragon Interchange, Doncaster, Sheffield and Leeds, as well as the commuter railway stations in between. There are also bus services from Goole to surrounding towns and villages. Goole is within commuting distance from Doncaster, Hull, Leeds and York.
Croda Italiana formed. 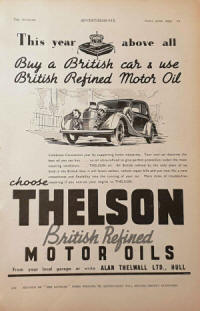 2010 - Croda International was shortlisted  for the Price Waterhouse Coopers company of the year award ...

Edward Hindley would have been pleased ...

Croids from The Newark Advertiser

One of Newark’s foremost industrial companies, Croda Adhesives, off Winthorpe Road, celebrates 50 years of trading in the town this month. Today, Croda’s Newark factory is the company headquarters for an international network of adhesive manufacturing plants located across Europe, the Americas and Asia Pacific. At home, meanwhile, it is interesting to think that whenever you tear open a Nestle or Cadbury’s chocolate bar, the special food-safe ‘cold-seal’ adhesive which holds the packaging together may well have been produced in Newark by Croda.

As with so many of today’s world-beating companies, however, the origins of Croda Adhesives are humble enough, having been the brainchild of just one man and his innovative ideas about the ways in which glue could be marketed and sold. 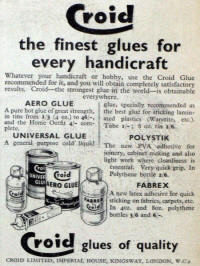 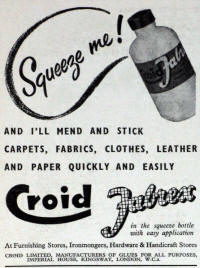 The company can trace its origins back to 1911 when a Mr P H W Serle registered a company known as Improved Liquid Glues Co Ltd. Up until that time almost every kind of glue was sold as a solid, requiring it to be dissolved in water and boiled before use. It was Mr Serle’s idea to manufacture a range of ready-to-use glues in liquid form, making them easier to apply and instantly attractive to both commercial and domestic users. His factory – the first to make so-called ‘prepared’ glues in this country – was located in Croydon, giving rise to the company’s first trade name, Croids.

Mr Serle’s early glues (made in the traditional way from bone and animal hide) proved highly successful and in 1919 when Allcock and Brown became the first aviators to fly nonstop across the Atlantic, their large wood and fabric biplane relied on Croid glues in some of its construction.

Such success had already led the company to seek new, extended, premises in Wapping, and in 1920 it became a subsidiary of the large British Glues and Chemicals combine.

A year later, a further move brought Croid to Bulwell in Nottingham, followed eight years later by a further relocation to Bermondsey in London. In 1940 the Bermondsey factory was heavily bombed and Croids production was transferred to a site in Newark already owned by British Glues and Chemicals. BGC had acquired the Newark family glue-making business of Quibell Brothers in 1920. The name Quibells, however, continued to be used for trading purposes until as late as the Sixties.

Quibell’s glue factory was located beside the Trent close to the old Bottom Lock, some distance off Winthorpe Road. Part of the premises survive to this day. With the war over and the Bermondsey factory still requiring considerable repair, Croids decided to remain in Newark and develop their site adjacent to the existing Quibell’s factory. 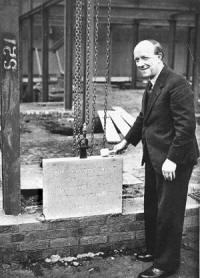 Building on from the warehouse loaned to them by BGC, Croids began to develop a new factory complex beside the main London-Edinburgh railway line. And it was the foundation stone for this new undertaking which was laid 50 years ago this month on May 25, 1948.

At the stone-laying ceremony the Mayor of Newark (Mr J H Knight) described the new building as 'making history for Newark' establishing a new permanent home for Croid after its previous wanderings around the country.

The new factory opened a year later in April, 1949, by the then BGC chairman, Mr Harold Cotes.

The Newark Advertiser reported that 'The new building has a smart facade of facing bricks with stone dressings – inside there is a terrazzo entrance hall off which lead offices and a terrazzo staircase to the upper storey where the laboratory is located'. 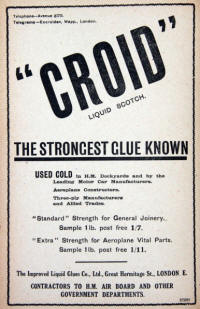 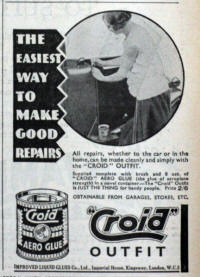 With the new works in full production the company was reported to be making no fewer than 85 different kinds of glue, each specially formulated for specific purposes – from use in the woodworking and leather industries to commercial packaging and bookbinding.

A new department in the late Forties saw the company experimenting with the first PVA emulsion adhesives which were to become the company’s principal output during the Fifties and Sixties.

Croids played a central role in developing the new PVA adhesive technology, first by buying in the compounds from outside, but later using its own polymers, developed in-house.

A great deal of additional pioneering work into the new processes was carried out in the Newark laboratories leading ultimately to the development of the first hot melt adhesives in the UK.

Another milestone in the company’s history was reached in 1968 when British Glues & Chemicals (including Croid) were taken over by Croda International.

From that time onwards the company has gone from strength to strength in Newark and in 1989 celebrated the opening of its new multi-million pound global headquarters at the Winthorpe Road site in Newark.

From a company which came to the town almost as a refugee in the dark days of the second world war, the Newark offices of Croda now control a network of adhesive manufacturers across the globe from the USA and Canada to Brazil, Belgium, Italy and Australia.

New markets are currently being opened up in China and the Far East, while during 1997 the company’s sales growth in South America was described as spectacular. In Newark, meanwhile, investment in new technology remains the company’s watchword with new plant recently having been installed to produce adhesives for the food packaging industry. 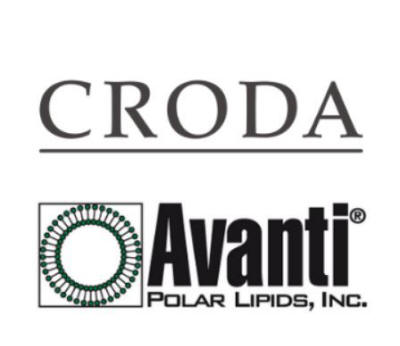 Towards the end of traumatic 2020 the share price of Croda International PLC (LON:CRDA) surged on the back of news about the thing everyone in the market was talking about: Pfizer’s COVID-19 vaccine.

The FT reported -
Croda’s shares jumped 8.0% to 6,722p, a record high, after the speciality chemical company announced it had entered into an agreement with Pfizer Inc to supply an innovative delivery system (a four component excipient) used in the manufacture of a COVID-19 vaccine candidate.

Excipients were the inactive ingredients which treatments, such as vaccines, were combined with to ensure safe, protected supply to the human calls. Substances that serve as the vehicle or medium for a small amount of the often fragile active,drug to be delivered.

Lipid systems provide this route for the delivery of novel mRNA vaccines, so a disease specific antigen can be coded into cells and recognised by the body’s immune system, as an alternative to traditional vaccine approaches.

'I’m very proud of Croda’s involvement in the battle to fight the most significant pandemic that we have seen in a generation. The application of our innovative capabilities is testament to the strong progress we have made to create industry-leading drug delivery systems, focused on developing speciality excipients and adjuvants to improve the effectiveness and stability of complex drug actives and vaccines'.

Back in August 2020, Yorkshire-based Croda completed its acquisition of pharmaceutical firm Avanti, which develops and produces high-purity polar lipids used in the delivery system for complex drugs.

The contribution from this contract was already included in Croda’s trading expectations for 2020, including in its guidance of the impact of the Avanti acquisition. If Pfizer’s publicly indicated vaccine doses for 2021 were to be required, the sales value of Croda’s contract in 2021 could be of the order of $100 million. 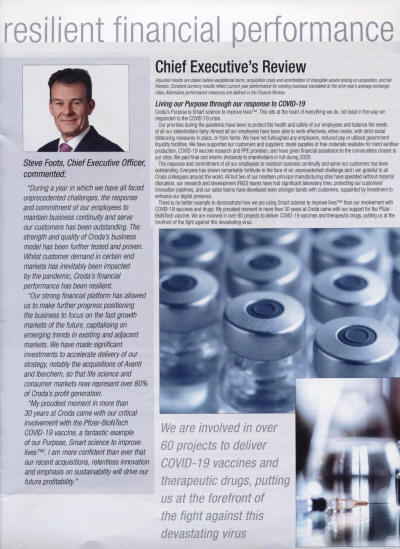 Business Live - David Laister Business Editor 10 Nov 2020
Croda to play a key role in Covid vaccine production as Pfizer deal revealed
East Yorkshire headquartered smart science specialist has reprioritised investment, resources and other projects across the group to meet demand.
Croda is a FTSE 100 chemicals business with bases in Hull and Rawcliffe Bridge, near Goole.
Croda is to play a vital role in the production of Pfizer’s Covid-19 vaccine.
The specialty chemical company has entered into an agreement with the US giant to supply a new ingredient that carries the active element into the body.
It will be produced at sites in the UK and US.
FTSE-listed Croda, based at Cowick Hall in Snaith, said it has 'reprioritised investment, resources and other projects across the group over the last few months to focus on the delivery of this project'.
Steve Foots, chief executive officer, said: 'I’m very proud of Croda’s involvement in the battle to fight the most significant pandemic that we have seen in a generation.
The application of our innovative capabilities is testament to the strong progress we have made to create industry-leading drug delivery systems, focused on developing speciality excipients and adjuvants to improve the effectiveness and stability of complex drug actives and vaccines.
It is another example of why our Purpose - Smart Science to Improve Lives – sits at the heart of our strategy and will continue to drive our priorities and ambitions in the years ahead.'
The contract with Pfizer runs for five years and awards Croda an initial supply contract for four component excipients - described as the vehicle to transfer the drug - for the first three years of the contract. Demand remains subject to relevant approvals.
On Monday, early results from the world’s first effective coronavirus vaccine were released, showing it could prevent more than 90 per cent of people getting Covid.
Developed by Pfizer and BioNTech, it is one of 11 vaccines in the final stages of testing.
Emergency approval for use is being sought his month, with hopes the first wave of people will get it this year.
The UK has already ordered 40 million doses, enough for 20 million people.
Croda’s recently acquired subsidiary, Alabama-based Avanti Polar Lipids Inc, specialises in the development and production of high-purity lipids, to produce research and clinical trial quantities of excipients in order to stabilise formulations and enable delivery into the body by injection for drug and vaccine applications.
The £1.3b turnover firm's existing health care business has a 20-year track record in developing IP-rich, innovative technologies for drug delivery systems for the pharmaceutical industry and had been working with Avanti, prior to the acquisition, to refine the complex processes involved in achieving the volumes of high-purity excipients required by its pharmaceutical customers.
Shares surged 11 per cent on the announcement, hitting a record high 6,884p, before settling at a 7 per cent uplift after Tuesday trading, up to 6,660p from a 6,210p opening.
Steve Elliott, chief executive of the Chemical Industries Association, welcomed Croda's role. He said: “From hand sanitiser to face masks and now vaccine production, it is, yet again, the chemical industry being there when most needed for society.
'The innovation and expertise in Croda International Plc is a fantastic example of what this sector brings to the UK and to the world. As we fight this most serious of battles, let all of us get behind this breakthrough; it is a proud moment for this country’s chemical industry.'

On Nov 9th 2020 the Pfizer BioNTech vaccine was approved.

... great grandfather Edward Hindley would have been proud of his contribution to the effort ...

back to British Glues & Chemicals