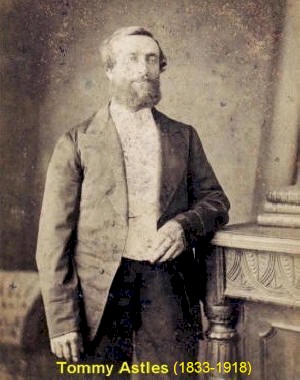 Thomas Astles (1833-1918) was a pillar of the local community, an enterprising Mechanical Engineer who ran a corn milling & bone grinding business at Acton Bridge and a brine pumping operation in Anderton. He was born in Winnington in 1833 on top of the Cheshire salt deposits. His father, Thomas Astles (1808-), born in Anderton, was also an Engineer. His mum Mary (1807-) was born in Northwich. Thomas had a younger brother John Astles (1845-) also born in Winnington.

He married Harriet Reader in 18?? and his step daughter Mary Elizabeth helped out as a Clerk in the Acton Bridge factory. The family lived on the site at Acton Bridge Mill House and his daughter Mary Adelaide married the Foreman at the saltpetre works next door, Mr William Wakefield.

It is likely that Thomas & John Astles subleased the Acton mill from W E Maude sometime before 1874 and when the Weaver lost water power in 1882 due to the new Dutton locks a decision on whether to invest in steam would be necessary.

Maude had been compensated for the loss of water power, but the economics of milling at Acton Bridge were changing, steam power was now cheap & available everywhere.

Tommy Astles was ideally qualified to handle the introduction of steam at Acton Bridge, he was a practiced 'mechanical and steam engineer' and had been running steam engines for brine pumping at Anderton for some time.

Not only did Tommy understand the steam technology, but he also championed the manufacturers case which balanced the riches of the industrial revolution and the common law of nuisance. And there were certainly nuisance costs associated with the rotten cow, a business that produced much of value but had an unenviable reputation with local residents ... 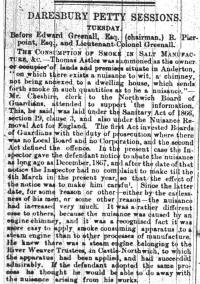 In 1869 this balance occupied Tommy Astles, the Magistrates at Daresbury and the Royal Sanitary Commission at Westminster ... the issue then was smoke nuisance ...

What a kerfuffle ... but in retrospect Thomas Astles came out well ... he was not only developing technology that turned rotting cow waste into jobs, manures, glues and gelatines, but also well aware of the cost of the residual waste of incomplete combustion and was actively working with the Engineers Society of Salford on technology to consume smoke ... the Magistrates seemed to be floundering as they wrestled with the associated law of nuisance ... with hindsight it is clear the problems of pollution and disease which righty occupied the Royal Commission in 1869 were solved by understanding the science and developing the appropriate technology ... shortly after the cost of smelting waste was reconfirmed in the Medical Officer's Report ... it was well understood waste was a cost to the business.

By September 30th 1882 the work on converting Acton Mill to steam had been completed and Tommy Astles was ready to sell up. The Manchester Weekly Times announced a sale. During his tenure from 1871 to 1882, Tommy had turned an unprofitable water powered zinc rolling mill into a modern steam powered bone grinding plant working 6 days a week 10 hours per day and processing 60 tons of bones a week. With steam power also available for corn milling and visions of diverse investments into shipbuilding ... but Tommy had done enough he was now ready for greater things.

At this time Cornwall Colliery in Tasmania were recruiting engineers to manufacture and install a much needed tramway for transporting coal. Big projects were afoot and Thomas was tempted ...

In 1884 the family split up and Thomas and step daughter Mary Elizabeth Reader emigrated to Tasmania in search of fame and fortune, his son Hugh (1865-1911) followed two years later. Tommy applied his skills to building tramways for coal at the Cornwall Colliery which started mining in 1886 when the branch railway from St Mary's to Conara was opened. Tramways were needed down Mount Nicholas to the railway siding. The tramway worked on a gravity system where the loaded carts pulled the empty ones back up and ran a distance of about 1 mile. No engine was required, just a braking system. Just Tommy's cup of tea! Maybe some of the engineering work was done in England and shipped out, this would have kept him busy from 1882 until he went to Tasmania in 1884? At the time the prospects at Acton Bridge & Anderton probably seemed paltry and burdensome in comparison to Tasmania where new mines were being discovered including silver, tin, lead, gold and high grade iron ore, many dependent on coal from Cornwall Colliery.

Hugh followed his father into engineering, training at Salford before following him to the Antipodes where he enjoyed considerable success.

Thomas died in Brunswick North, Melbourne in 1918 shortly after this last photo was taken. The family often speculated about Tommy's fortune seeking exploits down under and how much better he would have fared had he stayed with salt in Northwich! Perhaps he would have expanded his brine pumping operations and joined the Brunner Mond juggernaut ... Brunner Mond & Astles ... ?!

Whatever Tommy's motivation a manure works was pretty grotty when the alternative was Tasmania & sunshine. In 1882 an Alkali Inspector described a general scene at the Acton Bridge Manure Works -

'the manure is made from carcasses, shoddy, leather, slaughter house refuse and some mineral phosphate. The method is to heap twenty to thirty tones of shoddy in a shed, onto this is poured blood and refuse. Any carcasses that the owner may buy are, after being skinned, buried in the heap, the heap is allowed to stand and rot for five or six months. This is then shoveled into a mixer with some leather, crushed bones and acid. After mixing this is let into an open den and a man shovels onto it a certain quantity of mineral phosphate. The stench is simply intolerable. This maybe a public nuisance but my responsibility concerns the acid and mineral phosphate. I consider nothing chemical as alien to myself'. 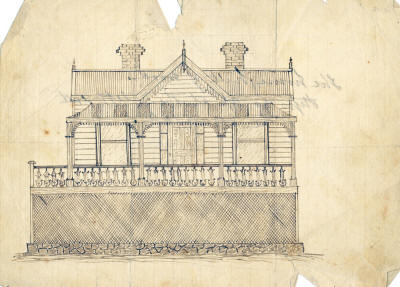 'Your page about Tommy Astles is great, and thank you! I have some original material of his that I'd be happy to share with you.
An original photo of his home at Cataract Hill, Tasmania dated 1885 (complete with cup/glass rings).
Tommy's original drawing of the house at Cataract Hill with monogram and captioned on reverse. The house, built of wood. Steps go up at the left end of the verandah.
Tommy's original drawing of a kitchen fireplace - most likely Cataract Hill. The kitchen fireplace is all whitewashed except the oven door. The fire is placed on top of the oven. When the oven is heated some fire is just under it.
Tommy's original drawing of his cottage at Cullenswood, Tasmania dated 1886. Cullenswood Cottage (Cornwall Collery, Tasmania)
I’m thinking that he may have had both the cottage at Cullenswood and the house at Cataract Hill at the same time - working away from home?
I reckon that he may have spent his later years at 200 Albion Street, Melbourne.
I’m afraid I have nothing to add to the story at Acton Bridge. I used to be taken over that way when I was a lad by my mum - mostly to Little Leigh cemetery. I grew up in Warrington, but she had very fond memories of staying nr Barnton with her Auntie Maud during the war. Her grandfather was William Wakefield, Thomas’s son-in-law. I’ll have photos of him - may be also of his father(?) I know that I do have one other photo at least of Tommy in his finery.
Kind regards
Len