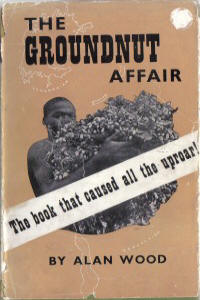 What a good idea!? - of grandiose schemes and catastrophes ...

In 1946, Frank Samuel was head of the United Africa Company, a subsidiary of Unilever who made soaps and margarines from oils and fats. He came up with an idea to cultivate groundnuts in the British colonies for the production of vegetable oil. Britain was still under rationing and short of cooking oil. He suggested the idea to his contacts in the British socialist government because Samuel believed that a private company would face insurmountable difficulties gaining approvals from government agencies for purchases of equipment and supplies for profit.

In April 1946, the government authorized a mission to evaluate suitable sites. The team was led by John Wakefield, an ex Director of Agriculture in Tanganyika. Wakefield had long been concerned about rural populations outgrowing their food supplies and moving into what he saw as the social morass of shantytowns around the cities. Although practically no data was available at that time he saw part of the food shortage as due to inferior agricultural practices which led to exhaustion and erosion of the soil. Wakefield saw Samuel's plan as a practical way to solve not only the food oil problem of Britain but also the economic problems of the British Colonies.

After a three month study, the team's report was optimistically favourable to the scheme. The Minister of Food John Strachey, eventually authorized £25 million to cultivate 150,000 acres of scrubland in six years. Areas of Kenya and Rhodesia were designated as well as southern, western and central Tanganyika.

Strachey was in a hurry. He asked UAC to get things underway immediately and then set up the Overseas Food Corporation to run the project from London. He chose as Chairman an old newspaper crony, Leslie Plummer and James McFayden from the Co-op as his deputy.

It was assumed that somebody knew how to do the job when in fact no one knew. The proper equipment and techniques had not yet been invented and the logistics of the operation were enormously underestimated. Nevertheless they began to recruit men for the 'Groundnut Army' and 100,000 ex-soldiers volunteered. The first site selected was in Kongwa in central Tanganyika where locals had already cultivated groundnuts.

Major General Desmond Harrison was placed in charge of the operations in Tanganyika. Flushed with success over Hitler, the politicos assumed the project would be carried out according to their false conception of a disciplined military operation.

Immediately expected and unexpected difficulties were encountered. The first problem was the lack of heavy equipment to clear the land for cultivation. Eventually, the project managers found some suitable tractors and bulldozers from Canada and bought US Army surplus tractors from the Philippines.

Next, the equipment had to be transported from the port of Dar-es-Salaam to the inland site using the only available transport - a single track railway with a steam locomotive. Unfortunately, a sudden flood of the Kinyansungwe River wiped out the rail tracks, leaving a dirt road as the only means of transport.

Although the Wakefield report had recommended an extensive scientific research programme for the first two years nothing had been done, Only at this stage did the British team decide finally to test the soil. They deemed it suitable despite the large amount of clay. Managers moved to the site in Kongwa and started to build a village, complete with prefabricated buildings. There was no suitable water source nearby.

When the British began to transfer equipment to the site from Dar-es-Salaam on the dirt road, they pushed through the Ruvu River and encountered inevitable problems with the hungry wildlife. Tractors were scheduled to arrive by February 1947, but only 16 smaller versions had reached the site by April. They were not entirely suitable for clearing of the local brush and bamboo.

Local large baobab trees proved hard to remove and the task was made more difficult by the fact that one of them was a local tribal jail, another was a site of ancestor worship, and many had bees' nests in their hollow trunks. Hospitalised workers became a permanent feature of the project.

The fact that the site was far from water sources caused further problems. The water had to be ferried in and poured into a concrete lined pool. Locals insisted on using it for swimming, despite protests by the European workers.

Eventually, managers decided to train local workers for the job. Enthusiastic but inexperienced drivers wrecked many of the tractors and when the Colonial Office sent two men to help the locals form their own trade union, the locals decided to go on strike in support of the dockworkers at Dar-es-Salaam and demanded better pay and more food. Striking workers left the British team with just one cook and increased wages threatened to contribute to local inflation, the price of village food rose.

By the end of the summer of 1947, 2/3 of the imported tractors were out of use. Bulldozer blades that were used to butt ground roots were ruined in a couple of days. The Groundnut Army decided to use 'shervicks' - machines that were part Sherman tanks and part tractors - but they were also wrecked in short order. Significantly the crews in the field, when they were allowed to, found ways to cope with the difficulties. A more effective method was to link two bulldozers with a long chain that would cut through the brush while the third bulldozer could turn over trees that resisted the chain. With that method, the Groundnut Army could clear 40 acres a day. When the workers tried to order a suitable ship's anchor chain some administrator in London, unable to think of any use for a ship's anchor chain in the Tanganyikan bush, cancelled the order.

Only with great difficulty was the Groundnut Army able to plant the first nuts. When the rainy season arrived, flash floods swept away the workshops and stores. Following the rains, the hot season baked the ground clay into a hard surface that made harvesting the nuts almost impossible.

At this stage Major General Desmond Harrison retreated, buried himself in copious quantities of paperwork and succumbed to advanced anaemia and a nervous breakdown. He was ordered back home on sick leave.

The original target of 150,000 acres was gradually reduced to 50,000 acres. After two years, only 2,000 tons of groundnuts were harvested. Latterly the Groundnut Army had tried to switch to growing sunflowers for their oil, but a heavy drought destroyed the crop.

The socialist government cancelled the project in January 1951. The £49 million expended was virtually a total loss. British consumers saw no additional oil for their tax money and local Tanganyikans lost all hope of a green revolution and their jobs.

Alan Wood concluded that the scheme was far too complex for any board of directors in London to run. Over centralization and cost plus contracting were the most important flaws in the project.

The air of Tanganyika had been thick with flying executives and the people involved could not have worked any harder such was their state of weariness, fever and fret.

But it is not so much a matter of how hard people work but how effectively they work.

The profit motive doesn't induce people into more effort but into better utilisation of resources, including their own time and alternative projects. And what is more difficult to replace is the function of the price mechanism and markets in coordinating decisions among a large number of different people.

General Harrison was not a stupid man or an incompetent man, he was plainly a man of great ability. The trouble was he carried a heavier burden than any man could bear ... and nobody could break the monolithic command and control mindset that resulted in the planned disaster ... there was no team work, no diversity and choice and no 'satisficing'  ...

... failures were not weeded out they were sustained by subsidies and turned into zombies; Darwin would have been troubled by the misunderstanding ...

back to the apapa generators