Some Fun with Evolutionary Economics

Why is economics the 'dismal science' ?

Thomas Carlyle was writing in support of slavery when he coined the term 'dismal science'. He believed -

It was kowtowing to market forces which Carlyle (and many others) found 'dismal'. Carlyle was suggesting that 'command' was the way to put the world to rights ... deliberate rational purposeful intentional planning ... a 'frit rational calculating economic man' ...

These sentiments were easy to understand and ubiquitous; wouldn't it be nice if we could override supply & demand and design our own future? Many assumed Carlyle was writing about the pessimistic predictions of Malthus and population growth but his real gripe was the apparent way economics undermined human choices. Free trade economics was putting the sugar barons on the slave plantations out of business, by increasing the cost of labour and removing protective tariffs. Was the great debate about protectionism & free trade really about the assumption that intelligent design trumped the exciting reality of natural selection?

Belief in intelligent design was not confined to religious fundamentalists, the intentional stance was applied to all Soothsayers who believe in a supernatural capacity to manipulate the future by command. It was the very plausible assumption underpinning of much of the 'Standard Social Science Model' and mainstream neo-classical economics - the assumption of the deliberate rational purposeful intentional planning of 'frit rational calculating economic man' ...

Human intention is immensely complex and perplexing but there is no evidence that it is supernatural. Human intention and economic reality of natural selection were very different ... 'the road to hell is paved with good intentions' ... human manipulation of the future was never about instructions but about discovery ... Darwin's process. 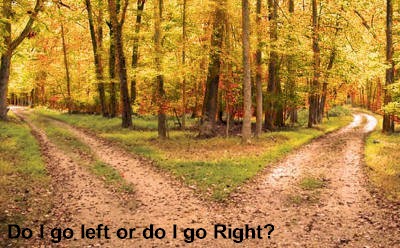 When we come to the fork in the road how do we know whether to go right or left?

How do you work it out? Imitating yesterday's success may be a good place to start ... but even if that can figured out ... the numbers are prone to change ... that wretched 2nd law of thermodynamics again?

There are fundamental truths about all decisions -

nobody knows how other folk will respond to other folks' decisions ...

... the only way to proceed is by trial & error ... and remembering what works ... is that a dismal prospect? ... or Darwin's exciting process of discovery?

Unfortunately the 'dismal science' of Carlyle's economics is still alive and well. Economic science has mercilessly exposed and dispelled the myths that have been invented to justify meddling with innate moral sentiments and technological know how by central planning and government interventionism ... dirigisme ... note that the great strides made with Artificial Intelligence have failed to cope with the distinguishing characteristic of Homo Sapiens ... empathy ... Adam the Smith's 'Moral Sentiments' which underpinned the economics of choice and the 'Wealth of Nations' ... exciting natural selection.

'Evolutionary economics analyses the unleashing of a process of technological & institutional innovation by generating & testing a diversity of ideas which discover & accumulate more survival value for the costs incurred than competing alternatives. The evidence suggests that it could be adaptive efficiency that defines economic efficiency' ... jpb 2001.

Natural selection seems to have been going on since the big bang at the latest ( ! ) and the explanatory power of evolutionary economics can be applied quite generally, exposing the improbability of the supernatural magic that some folk call intelligent design.

Perhaps intelligent design is really about exciting experiments in the imagination? Now that is real fun!

So the fun way to survive is to generate & test, discover & accumulate ... and discard the failures ... and thus adapt?

Individual discovery and social accumulation of tricks is magnificently uplifting and far too exciting to be described as dismal!

Here are some stories and some personal polemics for you to argue about - use your imagination and have some fun ...  if any of these yarns seem to be 'dismal' remember all my notes are still awaiting my editor!

Education & Compound Interest - Apapa Generators - 'ghosts from the past' ... did my own education start under the soap pans in Apapa? - or from a family tradition?

Decision Making - Mitochondrial Eve - 'only time helped, the truth was in the future' ... how on earth do you choose a wife? - a light hearted look at decision making - this story turns out to be about adaptation not intelligent design ...

Gains from Torts, Trade & Technology - Ricardo's Friends - 'folk mulled over the possibilities, investigated their ideas & learned a trade' ... do torts, trade & technology explain economic prosperity? - some fun with unlikely cooperative gains from trade - it seems that specialisation is necessary for synergy ...

Economies of Scale - Tommy Jeffers - 'folk quarreled somewhat and it all got bloody' ... was freedom & democracy invented to stop larger groups from falling apart? - another implausible tale about the downfall of intelligent design of nation states - it seems cunning protection from parasites & predators is necessary for economies of scale ...

Cooperation & Good Behaviour - Dickie Dawkins - 'folk got all mixed up, conned and confused' ... Adam Smith was a moral philosopher at my old university, he wrote about 'moral sentiments' long before he wrote about 'pin factories' ... is there an endogenous moral logic to natural selection as tort law evolves? - can complex chemistry really distinguish between good & evil? - crickey it seems Dickie Dawkins opened a Pandora's Box with Chapter 12 of 'The Selfish Gene' in 1976 ... 'Nice Guys Finish First' ...

Deep Cultural History - Joe Sixpack - 'the genes did cost / benefit analysis' ... Anglo Saxon culture is distinctive ... but there are many ways to skin a rabbit? - evidence for the evolution of culture may lie in deep deep history - a curious tale of Joe's ancient ancestors may throw new light on the mists of history where 'stuff happened' - maybe you have to go far far back back and think thinks if you are to cotton on ...

Emergence - Emergent Puzzles - 'the penny has to drop' ... do you really believe in Evolution? - to get you thinking - does the perplexing 'whole shebang & caboodle' really evolve?

Self Consciousness - Intelligent Design - 'all messy, difficult & complicated' ... what is plausible, deliberate, rational, purposeful, intentional planning? - plans aren't what they seem to be - an outrageous example of the arrogance of megalomaniacs, tax & spend and red tape - adaptation requires diversity, choice, failure and growth in populations ...

Questions of Time - Gardens of Forking Paths - 'perhaps time itself evolved' ... fun with labyrinths & evolutionary metaphors? - central to economics is the thorny problem of human decision making in time - Jorge Luis Borges' weird story introduces an interesting metaphor - but does it help? ...

Cultural Tit for Tat - Wars in Iraq - why get our knickers in a twist over culture? - some more provocative notes on evolutionary economic analysis ...

Money & Banking - Creative Destruction - 'emotional flip flopping of excitement & fear' - is the business cycle a Darwinian process of differential survival of inherited variants? ... diversity & competition is hard to take ... but can money be created out of nothing?

Evolutionary Explanations - Just So Stories - 'evolutionary explanations for everything' - Rudyard Kipling or Charles Darwin? ... a few stories for you to rewrite in clear concise English ... but tell it as it is ... not as it was ... we have learned since then!