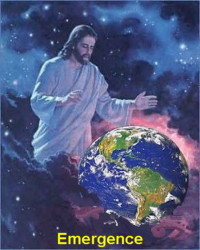 Part 7 - Do you believe in Evolution?

Richard Dawkins called it - 'the only game in town'

Now God said, and I agree with him, 'God almighty, maker of heaven and earth ...'

Evolutionary thinking is counterintuitive; we all tend to think that the Boeing 747 was intelligently designed by intelligent folk but like all human artifacts & cultures from stone axes to jam jars & Morris dancing, the process of evolution by natural selection is a more robust explanation ... however - the penny has to drop - but day by day the scientific evidence mounts, the process can be understood ... but not the overwhelmingly complex detail.

Harold Morowitz, at the George Mason University, has outlined the challenge in 'The Emergence of Everything', he told us how the world became complex.

Evolution is a copy/vary/select process generating vast diversities of inherited variants but only a diminutive few differentially survive. The process explains everything, including jazz, beer prices, grandmothers ... and Boeing 747s.

Dissipating energy streams drive recursive interactions which constantly change in time due to the ravages of the 2nd law of thermodynamics. From local interactions at low levels new novel structures emerge at higher levels, the new structures themselves then interact & interconnect … and on and on and on and on … for the first 10 billion years there was a physical evolution of increasing complexity up to the time planet earth was formed 4.5 billion years ago. From then on things got more interesting as biological evolution exploded. The biological journey from a planet to the self consciousness of the imagination took a long long time; only towards the end of the Earth's 4.5 billion years existence, did life and opportunities for the imagination appear. Why was this massive bulk of history often ignored in history lessons at school? After all the same process was going on all the time; the evolution of 'survival know how'. Survival know how that was part of and inseparable from the whole shebang & caboodle. This was not executive control and exploded the myth of human intentionality as a cause. The overwhelming majority of individual diversities created by capricious free will, were failures, they had no descendants ... survivors were always very very scarce but they alone accounted for the synergies of progress. In inordinate time large brains biologically evolved with neural interconnections from which emerged the human universals of sub consciousness, consciousness and self consciousness emotion (empathy) and reason (imagination). Those neural networks of interconnections which were associated with behavioural traits which helped survival; survived. Through relentless diversity & feed back in a Complex Adaptive System there emerged the cooperative and defensive behavioural traits of 'tit for tat' strategies which secured the economic synergies of specialisation (division of labour) and scale (the extent of the market) which were naturally selected and survived.

In this way stable interdependent hierarchical levels of emergence are constructed which constantly feedback on themselves thus guaranteeing a coherent self consistent whole shebang & caboodle ... a blind, relentless, recursive, physical, chemical, biological, behavioural and cultural process of continuous hierarchical emergences ...

... try these empirically substantiated statements about about the emergence of new levels of evolutionary complexity and see how far you get? Can you identify any discontinuity in the process? -

1. the big bang releases energy streams in an expanding universe and the laws of nature - the 2nd Law of Thermodynamics and space-time emerge

3. fusion reactions releases heavier nuclei, which are 'self-selected for survival' by the Pauli Exclusion principle - the elements of the periodic table emerge

4. local hydrogen fuel becomes exhausted, stars explode and die, debris is pulled into different stars and solar systems, which are self-organised non-randomly by the Law of Conservation of Angular Momentum - planet earth emerges

6. a primordial soup of amino acids, carbohydrates, fats and adenosine triphosphate leads to the 'capture' of solar energy and metabolism and DNA self-replication - life emerges

8. bacterial resistance is not acquired from antibiotics by some mysterious transfer process, but rather one random pre-existing variant survives the poison by chance and then self-replicates to fill the population space vacated by the mass death of the vulnerable originals - biological adaptation emerges

9. bacterial motility from the complex chemistry of rotating flagella propel cells along concentration gradients where random changes in direction occur more rapidly in toxin gradients than in nutrient gradients. It is 'as if' cells swim towards food and away from toxins, 'as if' 'chasing profits and cutting losses' - instinctive purposeful behaviour emerges

12. the giraffe's long neck is not the 'effect' of some meaningful 'cause', undoubtedly there will be some very complex long sequences of physiological 'causes' but the meaningful explanation is that short necked giraffes died out - there is no known way that intention, purpose, stretching, entreaty, instruction, punishment, reward nor design by even the most super intelligent being can make that neck longer - phenotype traits emerge

13. principles of differential survival and growth in populations are modelled by Lotka-Volterra predator / prey equations and lead to Gause's principle of niche survival by differentiation - species emerge

14. the immune system is not a collection of designed antibody remedies based on pathogen recognising templates encoded in the genome awaiting an enemy. But rather the spontaneous chemical generation of a massive diversity of antibody variants, one of which best 'fits' an invading pathogen. The 'fit' will chemically trigger both the deactivation of the pathogen and the replication of antibody clones which then replace the original population of prospective variants which don't survive. The replicating antibodies not only kill the pathogens but also remain in the system providing ongoing immunity against future pathogens. Massively complex chemistry explains future immunity against hitherto unknown novel pathogens - purposeful innovation and memory emerge

15. in the brain information flow dramatically speeds up as electro chemistry replaces chemical diffusion and synaptic connections and cephalisation results in further intensification. From billions of pre-existing neural variations most are useless variants and die, however some prove to be beneficial and are reused, strengthened and differentially survive . These physical changes are in individual brains and they accumulate over time to produce more and more useful interconnections - meaningful neural networks & circuits emerge

16. ever increasing complexity and diversity of neural networks & circuits leads to further specialisation with sensor networks connected to receptors and motor response networks connected to muscles, enabling us to 'wiggle' reality. All wiggles of all folk are part of the environment, they are 'transmitted' 'as if' to 'test' their consequences for survival value. It is 'as if' we choose to wiggle … or not. It is 'as if' suddenly there is one experimental 'wiggle' that 'works', the penny drops and the 'trick' is reused and 'remembered'. Evolutionary theory is ridiculed when genes are described as 'selfish'. Quite so, but similarly top down 'purposeful intent' can be a misleading description of behaviour. Genes behave 'as if' selfish, humans behave 'as if' with purposeful intent but the only process going on is blind repeated copy/vary/select, trial and error - the natural selection of meaningful associations - those which help survival, survive, that's why they survive - niche construction and unconscious behaviour emerge

20. our own arboreal ancestors evolved larger brains for finer motor control, for grabbing and climbing, for quick thinking, for faster response to change by pre-testing the effect of 'wiggles' on mental constructs or 'models' of the environment - imaginations and tools emerge

22. as the brain grows in size and complexity, intensified interaction and feedback in the neural networks & circuits results in a remembered present and the concepts of ancestral history and an imagined future. The more useful mental models spread in the population adapting to environmental change far more quickly than genetic chemistry, speeding up evolution and improving survival chances. But the models involve knowledge about probable environments not knowledge about unknowable futures ... because there is no foresight survival is all about more rapid adaptation - self consciousness emerges

23. self conscious man intensifies and extends survival enhancing communication with others through the use of symbols, semantics and syntactics - language emerges

24. with language, come ideas, which construct routines, then competences, then firms, then economies ... the communication of innovative discoveries and accumulations of 'know how' in institutions spreads across the generations and across seas further maximising the economic benefits of specialisation and scale - cultures emerge

NB the brain is the difficult one ... long before consciousness emerged the human brain was 'designing' ever more complex behaviour ... self consciousness is a result of brain activity, we decide and respond before we are consciously aware of it ... ultimately our own survival depends on the survival of our brain 'models'  ... the evolutionary function of the brain is to speed up adaptation … behaviour is an executable pattern in the brain which has survival value, it can be unconscious, conscious or self conscious.

NB the scientific theory of Evolution provides an explanation for everything ... E-coli wiggles, nest building and beer buying!

Scientific understanding changes by population change through the extinction of maladapted variants. 'good judgments and rational purposeful intentional plans' are ultimately nothing more than an accumulation of random brain experiments which prove in the future to be better adapted to reality than alternatives.

It is not foresight rather alternative behaviour died out!

'Intelligent design' is an illusion, it isn't what it seems to be!

'Rational purposeful intentional plans' are not sufficient to explain human behaviour, rational purposeful intentional plans are human behaviour. Behaviour is an adaptation to a real environment, emerging from a bottom up copy/vary/select process in the brain not a top down instruction from the brain ... if you follow the difference ... sure purposeful intent exists, in the same way that morality exists, it is a real survival trick, deep down in our skulls brain chemistry urges purpose and moral conscience … but it is not supernatural it is the result of a blind copy/vary/select physical process, tricks are discovered, they accumulate in populations becoming starting points for the next variant and eventually dominate in the environment and thus influencing the survival chances of future variants … there are no discontinuities just an immense complexity ... a genes to culture continuum … genes do cost / benefit analysis ...

Caveat - it cannot be 'proved' that evolution is the only process at work in the universe - however - our 'brain models' seem to get closer and closer to reality and alternative explanations seem more and more erroneous. Supernatural alternatives based on myth and magic may exist but there is no supporting evidence while scientific evidence for evolution continues to accumulate.

Repeat - there is no known physical mechanism for 'intelligent design' nor any alternative process to the 'generate & test' process of evolution. The concept is simple but the penny has to drop. Remember short necked giraffes died out ...

But don't trust me nor any other Soothsayer, all we can do is wiggle possible alternatives, our own brain has to construct evolutionary knowledge for itself by the ongoing elimination of errors until coherence emerges.

… it is meaningful and uplifting … and it beats loafing around at the traffic lights any day ! ... but the penny has to drop ...

back to some fun