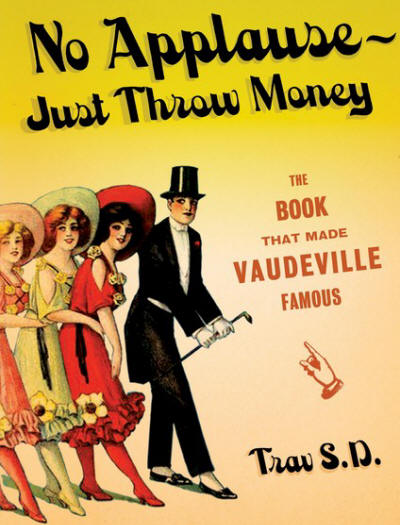 Vaudeville (the variety show or music hall), was a later development of Minstrelsy, freak shows (exactly such), medicine shows (purveying snake oil) and burlesque (uninhibited naughty fun). The heyday of Vaudeville was around the turn of the century and lasted until the depression. A typical performance involved a series of separate, unrelated acts grouped on a common bill - music, singers, dancers, comedians, trained animals, magicians, impersonators, acrobats, jugglers, one act plays, athletes, celebrities ...

In 1880 Tony Pastor (1837–1908) impresario, variety performer and theatre owner, the founder of Vaudeville theatre, tried an alternative to Minstrelsy and black buffoonery, a clean family show format, a kaleidoscope of novelty acts, Vaudeville was born.

In 1883 J S Putman, 'New Coon in Town' was probably the first into 'Coon Songs'. 'The Preacher and the Bear', 'My Gal is a High Born Lady', 'You're just a Little Nigger, still you're Mine, All Mine', 'Bake dat Chicken Pie', 'Every Race has a Flag but the Coon'.

These songs were new and not really an extension of the Minstrelsy tradition, they were racist musical jokes, they had a city edge, in yer face toughness, almost belligerent, which was absent from the jovial Minstrels. The minstrel songs strutted, the coon songs swaggered. 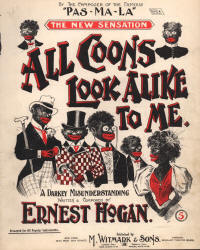 The coon songs soon abandoned the water melon, the chicken and the possum and in came the traumas of love, money and the razor. 'Bring Your Money Home', 'If Money Talks It Ain't on Speaking Terms with Me', 'Never Use a Razor 'less You Want to Raise a Row', 'R-A-Z-O-R'. There were few memorable melodies, the verse was the set up and the chorus was the punch line. Easy 4/4 with dotted eighth syncopations. 'If the Man in the Moon were a Coon', 'I've got a White Man Working for Me'. The appeal seemed to come from the white women who sang them in the Vaudeville theatres - Stella Mayhew, Marie Cahill, May Erwin, Clarice Vance and Sophie Tucker. Hefty coon shouters all, leather lunged belters sending every word of the lyric to the back row.

1895-1905 the 'Coon Songs' took over and the action moved to Tin Pan Alley and the Vaudeville theatres. 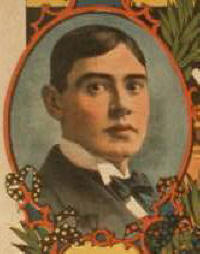 1895 John William Isham (1866-) produced 'Octoroons' and with the 'Coon Songs' the Minstrel Show was urbanised into Vaudeville.

Many of the black-face performers from Minstrelsy, like Eddie Cantor, went into Vaudeville and continued their black-face characterizations.

In 1893 white May Irwin became identified with a series of coon songs, the most violent was 'The Bully Song' of 1896. Like many others May Erwin graduated from Vaudeville to Broadway.

By 1890 New York was fast becoming the centre of music publishing and Vaudeville. But in 1890 there were no black performers breaking through into the first class white theatres nor into regular Tin Pan Alley publishing. By 1900 blacks were involved; big time. 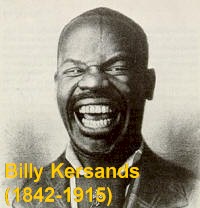 Billy Kersands (1842-1915) was a wide mouthed black comedian who immortalised the coon songs, 'Mary’s Gone with a Coon', and another coon song by Ernest Hogan, 'All Coons Look Alike to Me'.

Hovering around, of course, was Al Jolson. 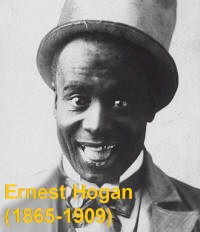 Ernest Hogan (1865-1909) was the first black performer to establish himself in white theatres. He started in minstrelsy with the 'La Pas Ma La' dance, but he would soon be eclipsed by Bert Williams who wrote a song with him, 'Ninth Battalion on Parade'. His innocent 1896 song, 'All Coons Look Alike to Me' was a smash for Witmark and also widely misunderstood. It competed with white Ben Harney's, 'Mr Johnson Turn Me loose' and 'Hot Time in the Old Town Tonight'.

It was Will Marion Cook's 'Clorindy: the origin of the cakewalk' which put Hogan in the top white theatres. Successful tours of Australia and Honolulu made Hogan enough money to be the first black resident of Harlem.

He appeared in a series of shows, 'Enchantment' and 'Rufus Rastus' established him as a star.

With 'Oh Say, Wouldn't it be a Dream' Hogan touched the heart as well as the funny bone, he was now hot property. The show 'The Oyster Man' followed in 1907. 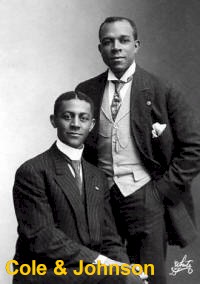 A rise to stardom was via Minstrel songs 'Parthenia Took a Likin’ to a Coon' and 'In Shin Bone Alley' then in The Creole Show' in 190? with black girls.

Black Patti’s Troubadours in 1896 ... then interpolation assignments and attempts at a Vaudeville act and a try at a black show ...

Bob Cole wrote an insightful article in 1902 'The Negro and the Stage' where he was concerned about the damaging image of Afro American musical performers and the demeaned racial stereotypes in Uncle Tom’s Cabin ... Bob Cole had arrived! 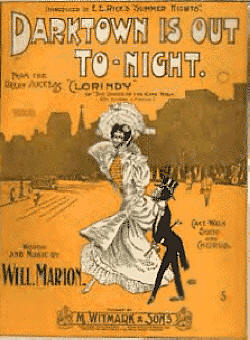 Will Marion Cook (1869-1944), a classical violin graduate of Oberlin. 'Clorindy: the Origin of the Cakewalk' 1898. He gave Negro songs to Broadway!

He had early associations with Sissieretta Jones (The Black Patti) who was an established concert soprano and he also helped Bob Cole who was trying to break into black theatre.

In 1912 he was at Carnegie Hall with James Reese Europe.

In 1918 Cook hired Sidney Bechet but his big band the 'Southern Syncopated Orchestra' lost out to the ODJB. 'Characteristic Blues'.

He taught the young Duke Ellington, who always referred to him as 'Dad'! 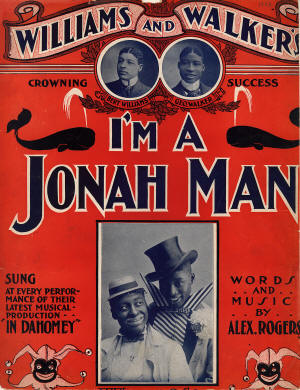 Bert Williams (1874-1922) was the black superstar, a sun, he moved from the black universe to the white, every black writer of note produced material for him. He performed in black face all his life but people laughed with him not at him. He started in minstrelsy and medicine shows with George Walker (1873-1911), billed as 'The Two Real Coons'. New York went wild, the first Cakewalkers in town, the first crossover dance, what a craze. The orchestras had difficulty with the syncopation but what fun! The pair wrote songs, 'Dora Dean', 'Oh I didn't Know, You're not So Warm', 'I've Been Living a Moderate all My Life', 'Who dat Say Chicken in dis Crowd', 'My Castle on the Nile', 'Snap Shot Sal', 'The Phrenologist Coon', 'She's getting More Like White Folks Everyday', 'Bon Bob Buddy', 'Late Hours'. Not only a vaudeville act they did shows, 'Senegambian Carnival', 'A Lucky Coon', 'The Policy Players', 'Sons of Ham' and a big one, 'In Dahomey', a black Broadway bonanza, and less successful 'Abyssinia', 'Bandana Land', 'Mr Lode of Koal'. Will Marion Cook, J Rosamond Johnson, Bob Cole, Cecil Mack, Tim Brymn, Harry vol Tilzer contributed songs and Williams started recording in 1901. 'I'm a Jonah Man', 'I maybe Crazy but I ain't No Fool', 'Nobody', 'Believe Me', 'Let it Alone', 'My Old Man' from Alex Rogers sum up Bert, a wry observer of his own luck, a man who expects the worst and gets it, weary and matter of fact for laughs not sympathy.

Bert Williams was the only black in the Florenz Ziegfeld Follies 1910. Song, dance & comedy and all those glamorously elegant chorus girls. 'Constantly', 'Believe Me', 'Play that Barbershop Chord'. 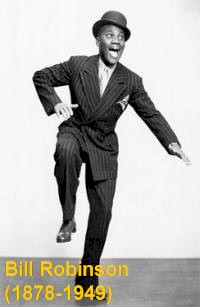 Bill 'Bojangles' Robinson (1878-1949) was, perhaps the most famous black dancer, he joined the Vaudeville circuit in 1902. The Father of Tap Dance.

A mover of the twenties was 'Bonjangles' made a name for himself as a jazz tap dancer and arrived with his role in Blackbirds of 1928.

Henry Creamer (1879-1930) and Turner Layton (1894-1978) Creamer helped everyone; Ernest Hogan in 1907 with the lyrics for 'The Oyster Man' and 'Yankee Doodle Coon', Bert Williams with 'That's a Plenty' and James Reese Europe and The Clef Club. He met Layton, a talented pianist with Jim Europe's 'Society Orchestra' in 1915 and suggested song writing.

The show 'Strut Miss Lizzie' with 'Way Down Yonder in New Orleans' put Creamer in debt and broke up the duo.

Creamer and James P Johnson 'If I Could be with You One Hour Tonight' 1926. 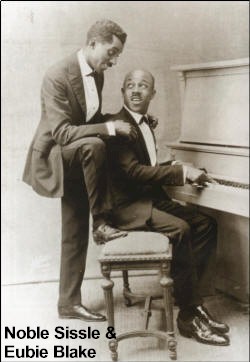 Eubie Blake (1883-1983) and Noble Sissle (1889-1975) were a great duo. Eubie was a child protegé and was playing in the local brothels at 15. The pair were associated with James Reese Europe and the New York 369th Infantry Regiment Band Eubie joined Europe as pianist and conductor in 1912 and Sissle was a singer and lyricist in 1916. After Europe's murder in 1919 Blake & Sissle took over this excellent band. They performed in Vaudeville together as 'The Dixie Duo' a dynamite act. Later they produced the famous musical 'Shuffle Along' which was one of the most profitable shows of the 1920s. It changed the face of Broadway.

In 1914 Luckey Roberts (1887-1968) was formidable in this period ad helped to get two songs published at Sterns 'Chevy Chase' and 'Fizz Water' which launched Eubie as a song writer. Followed up in 1917 when Eubie published 'The Charleston Rag'.

Their first joint effort was 'It's all Your Fault' and Sophie Tucker wanted it.

They followed up 'Shuffle Along' with 'The Chocolate Dandies' 1924 thus forged the link from Vaudeville & Tin Pan Alley to Broadway?

Blake was rejuvenated when 'They All Played Ragtime' was published in 1950.

Follies 1919, with Irving Berlin, 'A Pretty Girl is Like a Melody', 'You'd be Surprised', 'You cannot Make Your Shimmy Shake on Tea'. Bert's last Follies.

Recordings - 'Eve Cost Adam just One Bone', 'I want to Know Where Totsie Went', 'I'm gonna Quit Saturday', 'Everybody Wants the Key to My Cellar', 'The Moon Shines on Moonshine', 'Ten Little Bottles', 'Save a Little Dram for Me'. 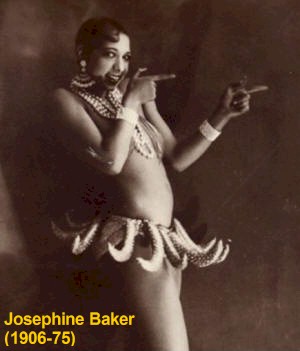 In 1919 Josephine worked with Clara Smith and The Dixie Steppers dancing and performing comic skits.

Then at The Plantation Club, Harlem and a chorus girl part in Sissle and Blake's, 'Shuffle Along'. Onstage she rolled her eyes and audiences loved her comic touch, a box office draw for the famous show. But this was pure vaudeville ... it was not her singing voice or jazz phrasing that was the attraction ... but rather her exotic dancing and body responses to the syncopated, swinging music of Noblel Sissle & Eubie Blake ...

'The Chocolate Dandies' followed in 1924 ... the highest paid chorus girl in Vaudeville. In 1925 she made it in Paris with 'La Revue Negre' ... then the 'Folies Bergere' followed ... an elaborate revue in Paris featuring women in sensational costumes ...

Certainly Josephine Baker had some good points ... rejected in America because of her colour she helped the French resistance during the second world war and the civil rights movement during the 1960s ... Josephine Baker was the 'Bronze Venus', a supreme artist who excelled in the compelling physical responses to Dixieland grooves ... 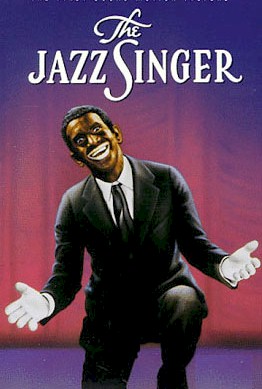 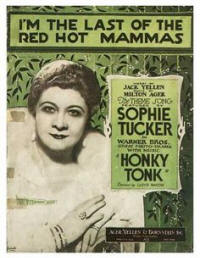 Al Jolson (1886-1950) a Jewish superstar of Vaudeville theatre who gained traction as a phenomenally successful entertainer.

Started in Vaudeville and shows in 1902, black faced in 1904, and never looked back. In 1911 'La Belle Paree', a musical comedy at the Winter Garden and Al was a star ... old favourites, energy and black face did the trick ... was this symbolic of Jewish and black suffering throughout history?

Sophie Tucker (1887-1966) a Russian Jew who settled in Connecticut and became the last of the red hot mamas. Harry Von Tilzer turned her down but she made her first Vaudeville appearance in 1907. Ziegfeld Follies 1909. 'Shelton Brooks' 'Some of These Days' 1911 and she was made ... The Beatles loved her ... and they weren't alone ... 'My Yiddishe Momma' 1925. 'Nobody Loves a Fat Girl, But Oh How a Fat Girl Can Love' written by Ted Shapiro her musical director in 1926.

Were Al Jolson and Sophie Tucker the last of the old breed? ... or the first of the new?