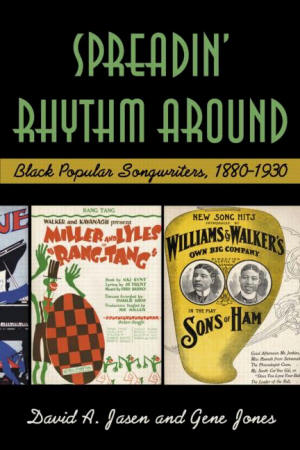 The black Afro American influence if not performance was total in Minstrelsy and black performers were the strength of Vaudeville but the Broadway Theatres were white and a resisting bastion.

And there was music in plays. 'Yankee Doodle Dandy' from the play 'Little Johnny Jones' written by George M Cohan. The play opened at the Liberty Theater on November 7, 1904.

Broadway did 'shows' ... entertainment ... but the theatre songs and music came out of Vaudeville ... there were 'Music Halls', 'Burlesques', 'Revues', 'Follies', 'Scandals', 'Gaieties', 'Hitchy-koos' and 'Passing Shows' ...

By 1900 Broadway was a glittering prize for all musical aspirants and a few blacks dared. Nobody could stop spreadin' rhythm around ...

Prior to 1920 Bert Williams was the only 'crossover' star, he was co-opted by Ziegfeld in 1910. And only three black composers were know to the general public; James Reese Europe, Will Marion Cook and W C Handy. There were no black equivalents to Jolson and Cantor but there were delights. A charming graceful era.

A Trip to Coontown (1898) was the first musical comedy entirely produced and performed by African Americans in a Broadway theatre (largely inspired by the routines of the minstrel shows). Bob Cole & Billy Johnson produced this the first all black review-like musical, an evening of coonery.

Clorindy the Origin of the Cakewalk (1898) followed and was a hit at the Casino Theatre Roof Gardens, a Will Marion Cook (1869-1944) show tinged with ragtime and highly successful. 'Hottest Coon in Dixie', 'Who dat say Chicken in dis Crowd', 'Darktown is Out Tonight', 'I'm Coming Virginia'. A big orchestra played syncopated music with Ernest Hogan in the lead. Williams & Walker included the song 'Senegambian Carnival'.

In Dahomey (1902), a success with Williams & Walker, was a full length Broadway show. 'Swing Along'.

Shuffle Along (1921) Eubie Blake and Noble Sissle with Josephine Baker in the chorus; 'I'm Just Wild about Harry'

Were 'I Can't Give You Anything but Love' and 'On the Sunny Side of the Street' written by Waller/Razaf??

With Joe Davis, 'Blue Turning Grey Over You'.

In 1920 there was only Bert Williams, by 1930 there were 10 leading black showmen, singers and dancers who put zip into the 'revues'!

Williams was followed by Florence Mills, Ethel Waters, Adelaide Hall and Edith Wilson. Fats dominated the 'black' 'Indian Summer' on Broadway but his fame came from recordings ... and radio.

The European influence was around.

But all this was old hat European operettas and by 1929 the Afro American traveling shows and sheet music industry was ailing, the phonograph had taken over and there was 'free' music on National Radio from 1928 which contributed to the demise? And then there was the movie?! 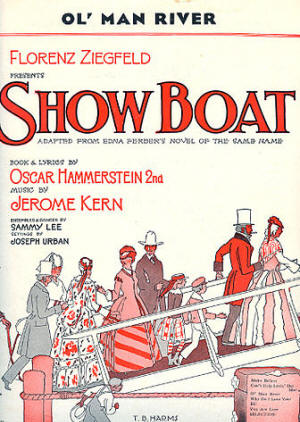 A new Golden Age of theatre songs started with 'Showboat' in 1927 as the great Jewish songwriters took over.

The 2nd generation musicals of the immigrant Jews

Vincent Youmans (1898-1946) a rare Christian sapped by TB, rivaled Gershwin and Rodgers during the 1920s but left only a few standards. No regular lyricist.

Hoagy Carmichael (1899- ) studied law and became a great exception, a product of rural America and writer of individual songs, not Broadway shows. Hoagy wrote about the Wabash, rather than love. He wrote fluid lines up and down the chords not the repeated notes of the city. His influence was Bix.
'The Nearness of You'. 'Lazy River', 'Riverboat Shuffle'. 'Memphis in June', 'Skylark' & ' Lazybones' with Johnny Mercer. 'Ole Buttermilk Sky',
1927 'Freewheeling' - 'Rockin' Chair'
1929 'Stardust' with Mitchell Parish, 'Georgia on my Mind', 'Two Sleepy People' with Frank Loesser.
1929 1930 1938 with Frank Leosser

Harold Arlen (1905-86) with Ted Koeler & E Y Harburg & Johnny Mercer - a pianist, singer & arranger from Buffalo. To New York in the late 1920s as a singer, then writer of the 'Arlen sound', those blue melodic lines. Mercer was consistently his best lyricist, with trains and rural images that sang with colloquial swing. Johnny was from the south and started as a singer with Paul Whitemen.
1930 'Get Happy' - Ruth Etting.
1932 'It's only a Paper Moon' with Yip Harburg. Jazz improvisers favourite.
1933 'Cotton Club Parade' - 'Stormy Weather' - then for the Cotton Club; 'Ill Wind', 'I've got the World on a String'. 'Between the Devil & the Deep Blue Sea', 'As Long as I Live'.
1939 'Wizard of Oz' - 'Over the Rainbow' with an octave jump, 'If I only had a Brain', 'Ding Dong the Witch is Dead'.
1942 'That Old Black Magic', a marvelous little snapper, 'Let's Fall in Love'. 'Blues in the Night' with Johnny Mercer, the vernacular poet.
1940s 'Bloomer Girl'
1940s 'St Louis Woman
1940s 'House of Flowers'

Harry and Jimmy stayed in Hollywood.

Leonard Bernstein and Stephen Sondheim were something else; heavyweights.
1957 'West Side Story'

Vernon Duke (-) aka Vladimir Dukelsky. 'I Can't get Started'

Then the telly and electronic entertainment. Clemences closed in 1965, the volume was turned up and the lyrics didn't matter.

and Frank Sinatra sang everything from 1939 with Harry James and still at it in the 1990s.