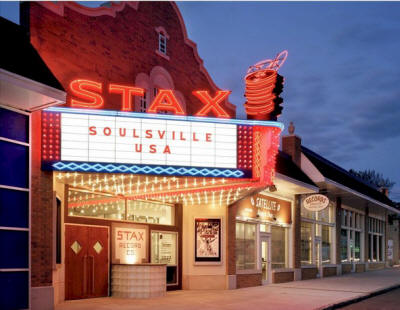 The earliest soul artists included the legends Ray Charles, Sam Cooke and James Brown (the Godfather of 'Soul Music') ... although, of course, all were happy to call themselves Rock 'n' Roll performers at the time ... that was where the bread was.

During the 1960s Beatles boom, both Charles and Brown claimed that they had always really been R&B singers! 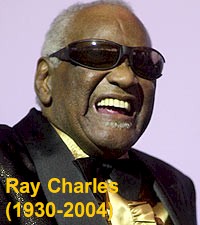 Two rivers of music washed into America at the start of the 20th century as the beat got detached and the chords moved. The groove was African and the bass lines were European rubato.

In 1955 the blues re-emerged and led to yet another breakthrough into popularity as the edges were softened with soul, a marriage of gospel, jazz and blues, (& country) ... leading directly to Elvis Presley ... and Ray Charles ...

Ray Charles was born in Greenfield, Iowa and knew of trauma when his little brother was drowning and he was going blind ... his mother coped with no nonsense self help and there was always music at the Red Wing Café.

At school he was a rebel, but he coped because he played the piano. Then his mum died and he ran away.

In Jacksonville he was introduced to the Grand Ole Opry but you had to see to read to gig. Classical music was a no go area for blacks. But Coon songs, Bessie, Louis … pulled like a magnet.

His method … short simple ballads & novelty songs … start by learning them one by one ... but ‘they all go the same old way’ … a strong steady back beat with that blue note feeling, 12 bar blues AAB, 32 bar standard AABA … grasp the fundamentals and you can learn them all at once … all jazz musicians visualise song structure in their minds eye, you don't need to see. The words of a song are as important as the chords when you solo, you base the phrasing on the lyric. The people wanted music that told a story and made them dance.

In Orlando, on his own at 16. The Sunshine Club. The Florida Playboys. Lucky Millinder, ‘not good enough kid’ … Tampa and The Skyhaven Club.

In LA with friends but his wife was gone, on his own. Swingtime Records.

On the Road with ‘Baby let me Hold your Hand’ when Charles Brown’s ‘Black Night’ went straight to no1.

1952 Atlantic Records were releasing the power that was inside soul music.

White kids started buying black R&B records to dance to. Music with a beat! ‘It Shoulda been Me’. Available to all on equal terms … no one was generating a feeling of inferiority.

In 1956 Elvis did ‘Heartbreak Hotel’, Carl Perkins did ‘Blue Suede Shoes’. And Ray Charles grew to genius. ‘Swanee River Rock’ (‘Old folks at Home’). The Great Ray Charles was a Jazz Album. A small Basie Band with ‘The Cookies’.

In 1959 genius moves on. Genius + Soul = Jazz. ‘What’d I Say’ was improvised and full of major and minor 7ths, the first use of an electric piano.

1963 live at the Apollo. But B B King and James Brown ruled the black dance hall where Ray Charles was previously the king.

Busted. A Year Off. Kicked the habit.

‘Play what you feel, it begins with rhythm’. ‘You only become better by doing’.

On the Road in the mid 1970’s. ‘Lay back, don’t come in too early’. ‘Hotel rooms measure by the number of beats it took to reach them all’. ‘The trumpet and the drum together, horns harmonise the rhythm’. But living on past glories? Divorce and Decline.

In the late 1970s Ray Charles was in a time warp and bitter.

The grand master, everybody knew Ray, everybody hoped the old man would have another hit … but Pepsi saved Ray’s ass ... there were only ghosts behind every tree. ‘Ray’s big wheel had worn its groove into a rut’ …

‘The gifts he was born with only grew because he laboured to perfect them’. He was always very close to the blues ... from Robert Johnson? 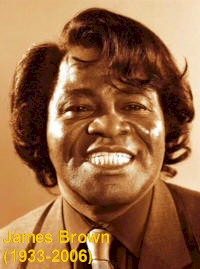 James Brown (1933-2006) 'The Godfather of Soul'. A southern Gospel singer from Georgia, who, hot on the heels of Ray Charles, he 'crossed over' from the gospel church music circuit into 'Soul' and pop.

Significantly James Brown described how he was inspired by Louis Jordan and his Tympany Five performing 'Caldonia' ...

Lead singer in the 1950s with The Famous Flames and 'Please Please Please' 1956 which owed much to Little Richard, another idol ...

In 1966 'Don't Be a Dropout' was a wonderful impassioned plea to his fellow blacks to focus on education. 'Say It Loud I'm Black & Proud' followed in 1968 ... but significantly James Brown was socially active within the country he loved, a fan of Ronald Reagan ... there were lots of missteps to be sure as drugs & violence came later ... but it was all a far cry from 'Gangsta Rap' and 'Don’t Give a Fuck' 2002 which was anti social.

Funk was an offshoot of Soul and a precursor of Hip Hop.

'Funky Drummer' 1969 with horns, guitars, bass and drums with intricate cross rhythms and multiple riffs ... and in 1969 James Brown produced a funk hit 'The Good Foot', complete with his energetic dance on the stage ... James Brown was a dancer! The 'Camel Walk', 'Mashed Potato', 'Popcorn' ...

Funk as a subgenre emerged as vocals became a rhythmic declamation, not sung not spoken, but 'rapped'. The style in the late 1960s was based on typical syncopated parts built on funky bass lines, drum patterns, and guitar riffs. The main guitar ostinatos for 'Ain't It Funky' 1969, were examples of Brown's refinement of New Orleans funk; irresistibly danceable riffs, stripped down to their rhythmic essence. This was rhythm, the tonal structure was stripped bare. Rhythmic patterns were played on the instruments rather than melodies. The guys were drumming on their instruments and James Brown was drumming vocals. The band was a drum. This was a reincarnation of the African grooves from Congo Square and the Blues ... a compelling popular feel from New Orleans straight to the popular music of the 1970s ...

These Funk recordings influenced musicians all over America including Michael Jackson who always insisted James Brown was his idol.

Michael Jackson, Prince and many others followed ...

'James Brown was almost a musical genre in his own right and he changed and moved forward the whole time so people were able to learn from him' ... 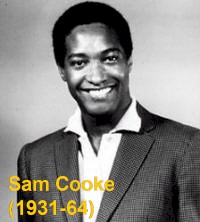 Sam Cooke (1931-64) - the third pioneer contributor to soul music who died suspiciously & tragically young at 33 but he had a host of followers including Aretha Franklin, Stevie Wonder & Marvin Gaye ... born in Mississippi the 'son of the Manse' the family moved to Chicago and he was steeped in Gospel music with a superb voice and went the same school as Nat King Cole ... 'You Send Me' 1957 ...

Otis Redding (1941-67) son of a Gospel singer from Georgia, died in a plane crash at 26 ... he was out of Little Richard and the sound of Stax Records ... ruined by a premature death.

Aretha Franklin (1942-) was originally a Gospel singer from Memphis who began secular recordings in 1960 and took off with her Atlantic recordings in 1967. She created a blend of R&B and Gospel music to create a personal style.

Atlantic Records and Jerry Wexler spread R&B to a wider audience as modern Gospel songs from the church were transformed into soul and 'crossedover' into the blues of Muddy Waters and popular R&B leading to 'white' Rock 'n' Roll and eventually the 'formal white discipline' of Motown in Detroit ...

Inspiration from the South - the blues, the church, Charles and Brown - Professor Longhair - New Orleans street strut and rhumba - Jumpa Blues on the piano.

The Drifters, The Coasters, The Midnighters, The Moonglows ....