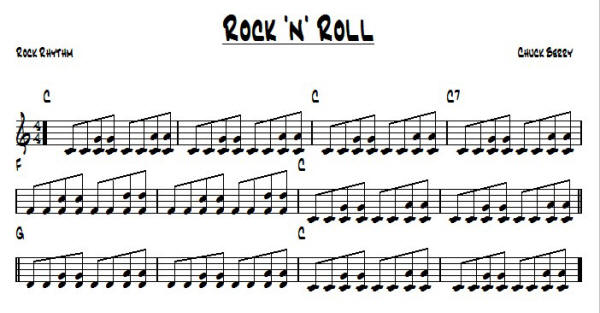 In 1949 Gene Autry had a hit with 'Rudolph the Red Nosed Reindeer', and for sure Bing and Ol' Blue Eyes were still going but in 1953 the raw talent of Hank Williams succumbed to pills & whiskey at only 29 and Patti Page had a hit with 'How Much is that Doggie in the Window' ... something had to happen? ... and it did!

'Rock 'n' Roll' had two different streams, the first wave of the music originated in the US in the 1950s, the second later in the 1960s developed into the more all encompassing style known as 'rock music' led by the British Invasion.

Alan Freed - presented a white softening of the blues and very different from the whipped sugar cream of the crooners and the American ballads!

An off shoot of Country music combined with R&B. Freed was a R&B deejay. But Rock 'n' Roll was genuinely new.

In the hands of the masters the basic & ancient rhythms of the Blues turned into the driving groove of Louis Jordan & Chuck Berry!

Most of the R&B rhythm was a pure blues shuffle with riffs older than Robert Johnson. But to get that 'feel' was terrible hard; the push pull, always punch & counter, call & response, tension & release, hammer ons & pull offs, the skipping shuffle drums & the straight ahead lead, messing with the beat, and the rhythm of it, the groove ... all the greats took bits from predecessors and created something new & fresh for the youngsters, all moved the music along that groove ...

But everyone was 'just' messing with the rhythm. Like all the Spanish rhythms. There were strict tempos for strict dancing ... but the Blues was the groove for your own compelling response.

There was nothing new under the sun, influences were everywhere especially from Jazz where they could manipulate that sound something rotten.

As you would expect imitators simplified it to pentatonics and blue notes in 4/4, but most missed the moving intensity and the virtuosity of a good groove ...

But who were the Rock 'n' Rollers who extracted the bare essentials and made a killing? 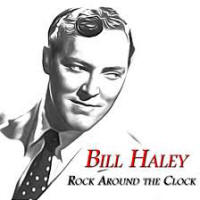 Bill Haley (1925-81) a Country & Western singer who changed his tune and used a drum. Straight out of Gene Autry and R&B as the sub genres mingled. The ODJB of the 1950's!

In 1954 'Shake, Rattle and Roll', a twelve bar blues form 'Rock 'n' Roll' song, written in 1954 by Jesse Stone and originally recorded by Big Joe Turner, a black blues shouter from Kansas, but more successfully by Bill Haley & His Comets and Elvis.

Milt Gabler produced Haley's 'Rock Around the Clock' as an imitation of his former protégé at Decca, Louis Jordan? Haley was a guitar playing cowboy with a musical restlessness that  pushed him to blend Country & Western with jazz and blues into 'cowboy jive' or 'hillbilly boogie' and later 'rockabilly' ...

'Rock Around the Clock' was a version of 'Joe Avery's Blues', a bog standard 12 bar blues, aggressively rocked up and blatantly rolled out. Significantly with drums and the honking saxophone... and featured in the movie 'Blackboard Jungle' from 1956.

Joe Avery (1892-1955) was a 'bone player from New Orleans, who played with the Excelsior Brass Band in New Orleans. All blues men play still play this song, Wynton Marsalis in 2010. 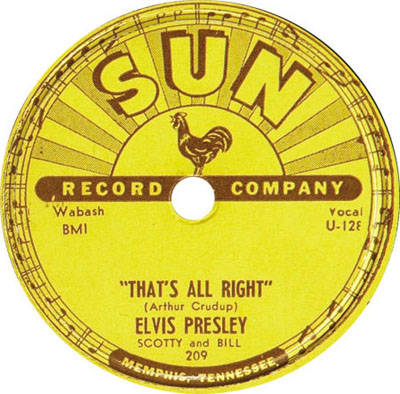 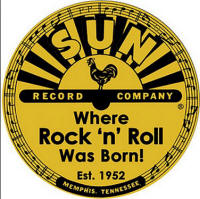 Elvis Presley (1935-77) a boy with a 'nice' voice who came from country roots but claimed to sing anything. Sam Phillips at Sun Records in Memphis had always said, 'If I could find a white man who had the Negro sound and the Negro feel, I could make a billion dollars'.

Elvis didn't pay any dues in clubs, dance halls or on radio shows he went straight into the recording studio. Elvis made a demo record on July 5th 1954, it was a 1946 blues number, Arthur Crudup's 'That's All Right', it aroused Sam's interest at Sun, and the punters loved it.

In 1956 'Heartbreak Hotel' & 'Blue Suede Shoes' complete with jazz breaks, messing with time & timbre and wanton presentation. This was irreverent like a blues shout but with clean Country & Western roots, in tune with a certain lyricism. Unheard of novelty even controversy. Here it was a new feel, it was certainly nothing like Frank Sinatra ... but neither was it the raw black blues ...

Boogiefying his presentation involved that accented 'kicking quaver', the effect was physical, demanding movement, jerking the body into activity ... 'All Shook Up' in 1957. 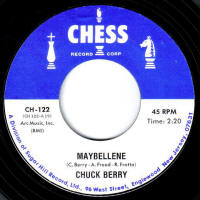 Around 1953 Chuck learned from T-Bone Walker then by 1955 he had moved to Chicago and became a protégé of Muddy Waters and Chess Records.

Blending white country with black blues and the backbeat, Chuck was raceless? and the first black rocker to be helped by Alan Freed, Cleveland, Ohio.  he developed the rock rhythm and the 'Duck Walk' - July 1955 Chuck broke out, 'Maybellene' was an 'adaptation' of 'Ida Red', a country stomp recorded by Bob Wills in 1938. Yet another example of the rampant cross-fertilisation in Afro American music. 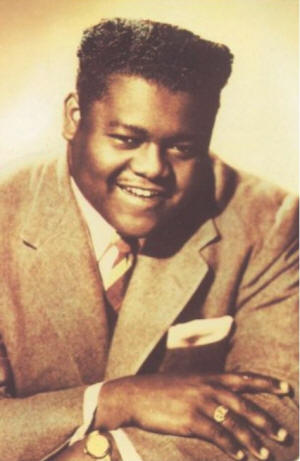 Fats Domino (1928-2017) born in New Orleans, a French Creole 'Antoine Domino'. His dad was a violin player but Fats played piano in the local bars. Perhaps his 'Fats' came from Fats Waller but Antoine pushed a mean crumb. He wrote 'Fat Man' in 1949, the rolling piano and back beat were well established. He played with saxophones plus drums, bass and lead guitar.

His Rock 'n' Roll piano style was a development of the honky tonk piano style of the old Western Dives. 'Ain't that a Shame' put Antoine 'Fats' Domino on the map in 1955. This was New Orleans shuffle, a boogie woogie beat with chords in triplets ... and a great influence on Paul McCartney. He sold more records than anyone else barring Elvis in the 1950s.

'Blueberry Hill' was his best seller in 1956. 'Walkin' to New Orleans' 1960. 'My Blue Heaven'. And change of recording contract and the British invasion curtailed the string of hits.

In 1986 he was one of the first musicians to be inducted into the Rock & Roll Hall of Fame.

Rock 'n' Roll reached Britain, as did everything from American ... and amongst the first to react were -

The Brits learned fast and in 1964 British groups started invading America where the big bucks were waiting ... and hysteria as America recognised itself ... The Beatles led the way then The Rolling Stones ...