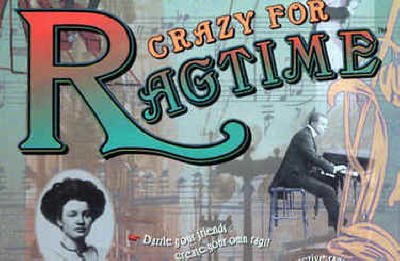 A fifth major influence on jazz emerged from around 1890. 'Ragtime' developed and became the popular music craze in America between 1900 and 1914. The term 'Ragtime' was first used in 1883 by Fred Stone in the title of his song 'My Ragtime Baby'.

Work songs, plantation songs, church songs, spirituals and minstrel songs all preceded Ragtime, but the African American nuances were impossible to write down in musical notation.

Certainly the origins of Ragtime were on the plantation ... where else? ... and again dancing was inevitably connected to the catchy rhythms, Karl Koenig suggests - 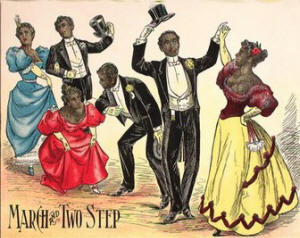 'The cakewalk was originally a plantation dance, just a happy movement they did to the banjo music because they just couldn't stand still. It was generally on Sundays, when there was little work, that the slaves both young and old would dress up in hand-me-down finery to do a high-kicking, prancing walk-around. They did a take-off on the high manners of the white folks in the 'big house', but their masters, who gathered around to watch the fun, missed the point. Perhaps the custom of a prize started with the master giving a cake to the couple that did the proudest movement'.

Ragtime can claim to be the first 'pop' music that was written down, tight, young & urban. Blues, by contrast were, 'lower class' music, loose, old & rural. Ragtime and blues were played by street bands prior to the Storyville fusion that produced jazz. Folk ragtime preceded classical ragtime which was a precision music, aspiring for white audiences, an alternative to the after midnight blues of the slow drag.

The roots of ragtime were in minstrelsy and the 'coon song' craze of the 1890s but there was a blend of influences which blossomed first in SEdalia and then St Louis became the centre. 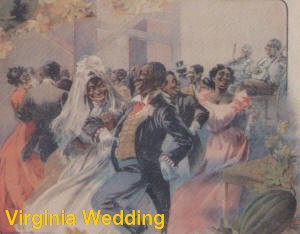 Ragtime came mainly from middle class blacks steeped in conventional piano playing, who absorbed the songs of Minstrelsy and wrote and published their songs. Rather a formal music but exuberant, presented with an exciting, relentless syncopation which gave a foot a tapping life all of their own. An idiotic rave, the kids loved it!

The ragtime dance was the Cakewalk. The black craze dances were the cakewalk, buck dances and the breakdowns. The 'white' dances were the Schottische, the polka, the two step and the jig. They led to the later craze dances the bunny hug, the Grizzly Bear, the Texas Tommy, the Turkey Trot and then the fast dances of the 1920's the Charleston, the Black Bottom, the Lindy Hop and the Castle's one step or Fox Trot.

The written music gives a clear indication of the essential musical characteristic of ragtime; melodic syncopation.

The ragtime syncopation was achieved by breaking the 2 beats to the bar time feel into a 3 over 2; a cross rhythm. The old timers called it raggin' the beat.

The ubiquitous figure which, in its many forms, occurred time and again in the ragtime tunes. Winthrop Sargeant identified the figure as a 'Scotch snap' as in the three notes of 'Turkey in the Straw' from 1834. But the figure was engraved in memories from the opening of Scott Joplin's 'The Entertainer'. Three notes cover the first two beat of the piece. The second beat is anticipated, or stretched out, with electrifying effect. The syncopation 'lifts' the melody line, giving it a 'float' or a 'lilt' which became the essence of jazz. Figures of this type occur again and again, everywhere in jazz. Get familiar them. They are used by jazzmen quite unconsciously ... he just feels these rhythms ... and learns by imitating others.

The principle of getting away from the downbeat on one and three of the bar was the most fundamental of jazz rhythmic devices. In bar 2 the same device was used again this time 'lifting' the heavy 1st beat of the bar by anticipation across the bar line. And again in bar 3 the heavy 3rd beat of the bar is 'lifted'. It was only in bar 4 that the beat resolves onto the familiar reassuring downbeat which concludes the 4 bar phrase.

There were a million ways to mess with this simple but devastating device, Louis Armstrong was a master at messing with the beat in this 3 over 4 manner. This was the way the experts like Louis produced 'a grove'. Listen again to that well known line by Scott Joplin and marvel at its effect. But, there's more, in the hands of a creative artist this device was the key difference between the 'jerky' precision of written ragtime and impossible to write 'smoother' jazz where the melodic trajectory was continually ebbing & flowing over & around the beat ...

Such cross rhythms were from African drumming and the banjos of minstrelsy but the ragtimers, to their credit, picked up the notion and made it immensely popular ... no one could resist a lively cakewalk ... 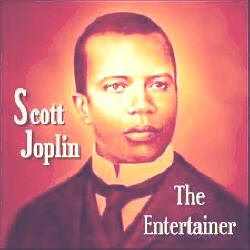 European folk melodies, instruments and harmony, built on the 'Quadrille' structure bringing several black folk melodies, or 'rags', together in a formal pattern

a piano dance suite, dancing rhythms based on the march, the Cakewalk was a 'grand promenade'

rigidly syncopated piano music; left hand, single note on the strong beat, chords on the weak beat plus a horizontal rhythmic flow with the right hand

the original rags were piano imitations of plantation banjo party music, with syncopation from ‘pinging G strings’, and Irish 'jig' style ragtime led to a boom in parlour pianos and sheet music sales

almost universally syncopated, including breaks and stop time with a stylistic pattern for black dance music generating the typical 'boom click' left hand which at its best generated a back beat against the syncopated 'cakewalk' patterns of the right hand 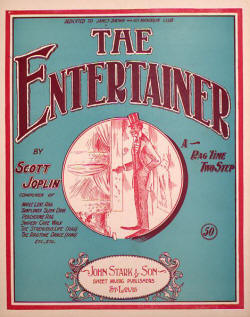 Ragtime prospered with performers and player pianos but the torch was handed over to Jazz with the advent of recordings ... and then the radio and the movies killed it off.

However Jazz was more than instrumental Ragtime. Jelly's 'stomp' piano freed up rigid the boom click into a propulsive two handed swinging improvisation.

The cakewalk dance rhythm had come from the Caribbean c1890 as a syncopated blend of march, polka and two-step, and led directly to the ragtime piano style of a heavy, syncopated 2/4 left hand and a fast, melodic right hand.

piccolo or clarinet on obbligato

cornet would also play a lead with second cornet harmonies

First there was Stephen Foster, Dan Emmett and James A Bland who all published songs, then came the songs of the classic Ragtime era - AABBACCDD

Music publishing had been centred on New York's Tin Pan Alley neighbourhood starting in 1892 with Charles Harris's 'After The Ball' which was a waltz, there were also mad crazes for 'Indian Intermezzos', 'Hawaiian Songs' and 'Ethiopian' pieces. 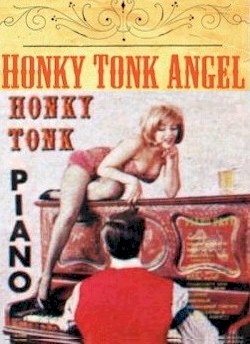 Why the piano? Were piano rhythms imitating the plantation banjo? Certainly one guy could entertain & sing for the dancers ... playing rhythms, bass lines and hot solo lines all for the price of one guy on the piano?

The mainstream piano rhythms that preceded jazz were pioneered by Sam Lucas (1840-1916), a black song & dance man who performed in the white Minstrel style ... the grand old man of the negro stage ...

In 1878 shivering & shaking out in the cold contained the tell tale syncopation, the kicking quaver which stirred the body as he sang 'hungry de-jected and un pro-tected' ...

1890 'The Creole Show' followed; an innovative show and a break with Minstrelsy full of attractive negro girls and fun songs which led to the coon songs of Ernest Hogan, Cole & Johnson, Williams & Walker ... Vaudeville and on to Handy's Blues, Bessie Smith ... and jazz.

Various piano rhythms were explored around 1890 ... no recordings but we can be sure Sam Lucas was innovating as he placed his black rhythms in front of the white audiences for popular consumption ...

Barrelhouse piano (aka 'fast Western') may have originated in the saloons of western mining camps ... the Wild West Saloons!.

Honky tonk piano may have got its name from the Tonk Piano manufacturer that supplied Tin Pan Alley. But the first music genre to be commonly known as honky tonk was a style of playing related to ragtime, but emphasizing rhythm more than melody or harmony. Honky tonks were rough & ready establishments, famously associated with country music in the Deep South and Southwest, in cowtowns, mining camps, military forts & oilfields. Such 'dive joints' served alcoholic beverages along with girls to a working class clientele. They were full of drunken hillbillies having a good ole' time dancing with Mayanne. Loud, rowdy bars steeped in new music, 'honky tonk' country music ... later Hank Williams was associated with Honky Tonk developments ... 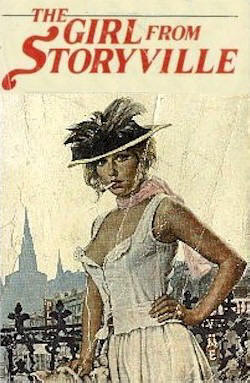 Here was a fascinating parallel to the piano and girls in the Storyville sporting houses which were more usually associated with jazz?

And Fats Domino and his New Orleans piano Rock 'n' Roll had its roots here?

Recordings / Songs -
1892 D Emerson's 'Kullud Koons Kakewalk' for banjo virtuoso and 'jig' piano, the beginnings of 'folk' ragtime leading to 'Country' music and the Hokum Bands of the 1920's

1896 Hayden and Metz, advertising the McIntyre and Heath minstrel show in Old Town, Louisiana, wrote a song with irresistible rhythm, first sung by Mama Lou at Babe Connors in St Louis, adopted as a rallying song during the Spanish American war and became Roosevelt's Campaign song - 'There'll be a Hot Time in Old Town Tonight'

1897 Kerry Mills, a white classically trained academic, cashed in on the craze - 'At a Georgia Camp Meeting'

1911 Irving Berlin's 'Alexander's Ragtime Band' was a popular song not a rag.

In 1959 Chris Barber recalls he had the honour of visiting New Orleans to give a concert and was fortunate to find a collection of original Ragtime sheet music at Bill Russell's little shop in the French Quarter. This encouraged his band to, at last, prepare and record some authentic Ragtime-style jazz; 'Elite Syncopations'...