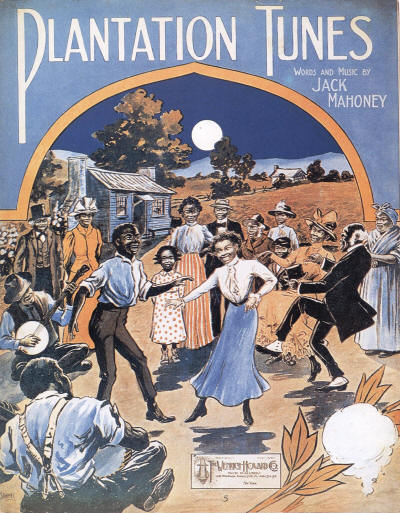 Slave and plantation music was the first of five local American influences which fused into jazz around 1900.

Work songs were everywhere on the plantations - songs accompanied cane cutting, rice fanning, pulling, hammering, rowing, chopping - all these songs had repetitive rhythmic riffs, monotonous but an effective help for monotonous work. However songs were also heard after hours on the stoops, often lone voices, with strange rhythms and strums. Often melancholy but sometimes exciting ... depending on moods.

With the economic success of the plantations, the parties and celebrations of the owners often included musical contributions from some accomplished slave drummers and instrumentalists. There were always dance songs as well as work songs. Maybe the dance music involved fiddles and banjos and reels, jigs and gallops. And maybe a 'performance' of spirituals from the churches crept into the repertoire. Even on the plantations music was thriving and crossing the cultural divide. For sure slave music was encouraged; it helped work efficiency and social peace & tranquility.

Around 1850 plantation songs sung by the slaves had developed their individual character.

They were strongly influenced by African rhythm and led directly to the embryonic country blues. 'Lawdy, Capt'n, I's not a singin' I's a jes hollerin' for help'.

The music always had a strong ground beat, the rhythm of work, full of field hollers, forerunners of 'the break', and insistent call & response patterns, blue notes, falsetto voices with melisma.

After the Civil War prison songs were identifiable as a development of the plantation songs. 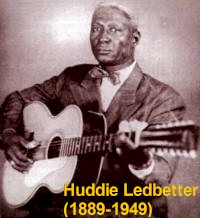 Huddie Ledbetter (1889 - 1949) was born on Jeter Plantation, Shereport, Louisiana. Discovered by Alan Lomax he recorded work songs, prison songs and black ballads - 'Rock Island Line', 'Midnight Special', 'Where Did You Sleep Last Night', 'Bring Me a Little Water, Silvy', 'Pick a Bale Of Cotton', 'Cottonfields', .'Take this Hammer', 'John Henry', 'Stagolee', 'Midnight Special'. Songs which were influential in the Skiffle music in the UK which produced the Beatles and the other R&B artists. He made his 12 String Guitar sound like a band. And significantly he teamed up with the legendary blues musician Blind Lemon Jefferson.

When they played, the girls flocked to listen and the boys sulked. Oh those bass lines ...

These two guitarists demonstrated the flexibility of the guitar over the 4 string banjo. Huddie and Blind Lemon were able to get a bass line moving on the guitar and build cross rhythms on the upper strings to complete 'a groove'. A technique which reflected many of the great blues players culminating in Robert Johnson and also influenced the guitar playing of Maybelle Carter and all that followed in Country music.

His music flowed through Pete Seeger to Bob Dylan, 'a debt to Lead Belly' and Janis Joplin, 'it was Lead Belly first'.

In 1940 Alan Lomax also discovered Muddy Waters on a plantation outside Clarksdale, Mississippi, playing the popular songs of the moment, 'Chattanooga Choo Choo' & 'Darktown Strutters Ball' for 'pretty' dances, the Black Bottom, the Charleston, the Two Step & the Waltz ... clearly little had changed, the music that folk heard and loved was still played for dancing ...

New Orleans composer Louis Moreau Gottschalk (1829-69) appeared to have introduced themes from Creole slave music into his works, particularly 'La Calinda' and 'La Bamboula', dances performed in New Orleans Congo Square. Gottschalk's piano piece 'The Banjo' (1855) which included the sounds of Stephen Foster, was the earliest composition to reflect the sound of the instrument then commonly played by Minstrel performers, and perhaps the earlier African instrument was played in Congo Square where Gottschalk would have heard it when he was a boy, in the 1840's.

The plantations songs soon became drenched with the rhythms of the Southern churches, both off springs of African drumming, and went straight into Folk Blues and Country Music and Jazz via Huddie Ledbetter & Blind Lemon Jefferson and the pinnacle of Robert Johnson to Maybelle Carter to Pete Seeger and on to Bob Dylan and The Beatles ... and via Lonnie Johnson & Johnny St Cyr directly into Jazz ... and via Blind Lemon's protégé T-Bone directly into R&B and B B King & Chuck Berry ...

However these same relentless rhythms were all over the South no musician with ears was immune from their compelling infection ... names can only be mentioned as exemplars of an inevitable evolution of Afro American music ...