The pianists were different, they worked by themselves.

Scott Joplin and the Sedelia Ragtime. 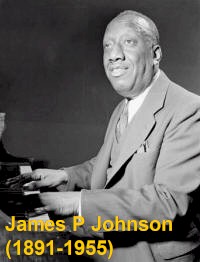 James P Johnson (1891- 1955) was from New Jersey, 'local' to New York City. He was a Harlem pianist who bridged Ragtime and stride and wrote songs. James P learned all Scott Joplin. 'Carolina Shout' 1918.

By 1920 James P had gained a reputation on the East coast on a par with Eubie Blake and Luckey Roberts.

He was The Stride of The Harlem Renaissance, of Rent parties and of 'Charleston' ... the first Jazz pianist, 'If I Could Be With You (One Hour Tonight)', 'You've Got to Be Modernistic', 'Don't Cry, Baby', 'Keep off the Grass', 'Old Fashioned Love', 'A Porter's Love Song to a Chambermaid' and 'Snowy Morning Blues'.

Jimmy Yancey (1894-1951) was a Chicago man with barrelhouse Blues in his blood. He established the Boogie Woogie style with that motoring repeated left hand figure.

Earl Hines (1903-83) played with Louis on the Hot 5 and led a big swing band. He was the father of Modern Jazz piano and 'trumpet' style.

Meade Lux Lewis (1905-64) was a protegé of Yancey and famous for his rollickin' 'Honky Tonk Train Blues' 1927. His mates were Albert Ammons and Pete Johnson ... what a trio!

Thelonius Monk (1917-82) was a very logical eccentric, steeped in stride, Ellington and the blues, playing all his own music in a masterful percussive style ...

Monk was widely regarded as one of the most important composers in jazz, as well as being a highly original pianist. His playing was more sparse than most of his contemporaries.

Bill Evans learned from Powell and contributed to 'Kind of Blue'.