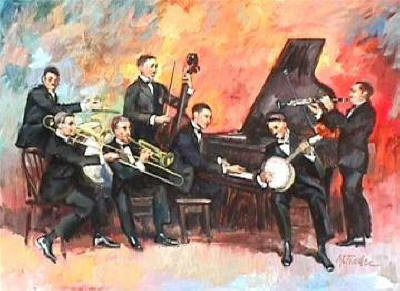 Jelly Roll Morton (1890-) a creole of colour, highfalutin but started playing Buddy Bolden's music on the piano and wrote it down. The piano was no longer a ladies instrument. only Jelly and Duke wrote New Orleans polyphony, swing band arrangements were written for sections playing at different times.
It was not ragtime, minstrelsy nor the blues but he took Bolden's music and developed a loping smoothed out four to the bar mix which became jazz, with all the breaks and tricks, full of Haberna rhythms and the 'Spanish tinge'. The right seasoning for jazz.

As a teenager he played the sporting houses. In New Orleans, he told his grandma he was a night watchman, but he didn't tell her what he was watching! In the bordellos of Storyville and then on the road from 17, Memphis, Kansas City, Los Angeles, Chicago, he toured everywhere taking his music with him and then to New York in 1923 and Melrose Brothers. 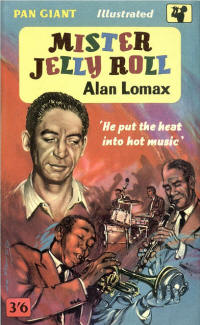 He demonstrated that the collective three part polyphony of improvised New Orleans jazz could be orchestrated and written down.

The Library of Congress recordings were definitive oral histories of the birth of jazz.

But younger men we on the move - Duke Ellington and Fletcher Henderson.

Jelly Roll Morton - it's all at the wonderful Mike Meddings website !!