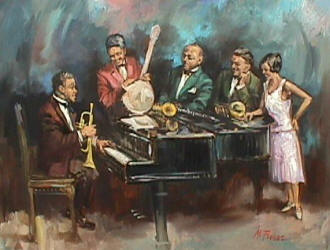 In 1925 a group of New Orleans musicians assembled in Chicago to record a series songs which became models for a tradition of hot Dixieland Jazz which persists today - the Hot 5 & Hot 7 recordings.

The creative innovations of Louis Armstrong influenced, not only the contemporary music of the time, but also all American popular music of the twentieth century.

On these records Louis Armstrong defined not only jazz music and particularly 'swing' but also revealed the future of jazz and popular music.

swing; buoyant, detached, floating, melodic & rhythmic trajectories, away from the 'ground beat', resulting in a lilt, which was difficult to describe but unmistakable when heard and felt, the manifestation of the tension & release created by the interaction of juxtaposed rhythmic lines.

The haunting blues, incredible spontaneity and unfathomable swing, how did they do it?

In an attempt to answer this question we have started to transcribe the actual recorded performances of the Hot 5 and Hot 7 into 'Band in a Box' where the effects can be both musically analysed and heard.

'Band in a Box' is a superb tool for helping all music students, and here are some supporting comments for this software choice. In transcription work the lead lines can be heard against realistic backing chords and meter. This is helpful if the subtle timings and accents which make the music swing are to be faithfully reproduced.

Learning to play Dixieland Jazz has traditionally been an process of aural imitation - listen and learn. Musical analysis of transcriptions can never replace this process but it can dramatically speed it up. We can explain in sound and notation how they did it. All those miraculous licks are available for practice. Jazz will always be a personal interpretation but what better place for a student to start paying his dues than the Hot 5 recordings?

Our 'Band in a Box' files are also useful as notated aural examples for study with the written lessons - A Musical Basis for Improvisation through Aural Perceptionere.

We are working on all the Hot 5 and Hot 7 recordings and CDs/mp3s are readily available and should be in every jazz musicians collection. They can also be heard at RedHotJazz - Scott Alexander's excellent web site here.

If you want to learn more about the progress of the project, and read some comments on the music from 'the pundits', all the songs are listed here.

The project was initially inspired by Alan Rouse and if you want to hear a draft midi file of our first transcription here is My Heart, the first Hot 5 recording from November 12th 1925, with some dramatic work by Alan.

Another example Put 'em Down Blues, this monstrous effort came from my mate Cliff Harper who managed to unravel this unusual and seldom heard 48 bar song with amazing skill. Cliff, a great friend, a great musician and a gentleman, always on hand to help with those unexpected chords and rhythms ... thank you Cliff, well played; R I P.

These transcriptions result from hours of effort and are intended to be an educational resource for the personal use of students who want to learn. They are not for commercial use nor indiscriminate distribution to others. They are private property, please respect the rights of those who have done the work.

Feel free to download the examples and tell us what you think. However we not only need your reaction but also your assistance, this is an ongoing project!

Send me an email if you are interested in helping ... email