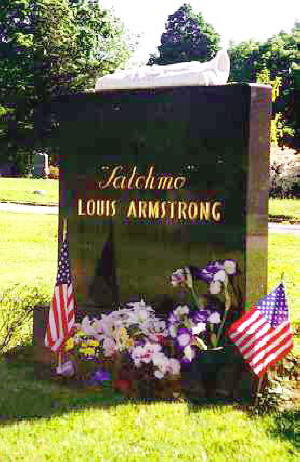 From the 1960s jazz was apparently fragmenting ... amongst acrimony and angst ...
Swing, Dixieland Revival, Bebop, Hard Bop, Cool and then Modal Jazz and 'Avant-garde' and Fusion, a merging with Rock ?!

And somewhere in the mix there was 'Free Jazz'.

What on earth was going on?

Charlie Parker died in 1955 and in the 1960s most of jazz was led not by his henchman Dizzy Gillespie but by a young trumpeter who had played along side him; Miles Davis.

After Bebop under the influence of Miles Davis, Jazz went along a different pathway, building on esoteric minority cults of musical elitism ... no dancing, no fun ... just protest and pain ... and very free jazzers ...

Miles Davis was a giant with a delicious sound and a cult following ... Miles studied at Julliard and made the best selling jazz album of all time 'Kind of Blue' ...

But Louis Jordan, Muddy Waters, Ray Charles, and others were taking their own mix of jazz, blues and soul into a blues mainstream 'Rhythm and Blues'. The youngsters danced and had fun!

A big schism developed in jazz between the tradition of Louis, Duke and Bird and the iconic cult of modernism and the avant-garde ... but apart from a few nerds the audience had gone ... the blacks were into R&B and the whites had gone to Rock 'n' Roll ... simpler music, with lyrics to sing and a rhythmic back beat ... much of the Jazz after Bird killed off communication with the youngsters ...

Jazz was too big an umbrella to hold such fragmentation and rivalry. The new jazz aberration was now difficult to play, hard to listen to and impossible to dance to; it was serious 'cult' music, but the kids wanted fun, singing and dancing. Cult and communication barriers were not welcome and most became resentful of the new intensely emotional and exclusive music ... for musicians only ...

Miles Davis, Modal, Avant-garde & Fusion jazz and black rights & drugs somehow became intertwined and were pushing post Bop jazz further and further away and out of view. Miles and Charlie Mingus seemed to be demanding that audiences show respect and pay attention to musical studies previously the domain of classical music. Folk were no longer entertained they were being tyrannised & oppressed in America; the land of the free.

Swing was a synergy from interacting rhythms but synergy was being squeezed out by individual virtuosity. Just like Liberal Democracy, without checks and balances the President ends up an elected dictator. In American popular music the checks and balances came from commercial failure, if you didn't swing and find a groove the kids wouldn't buy the records nor come to the dances. 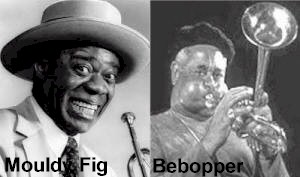 There was no work and instead of love there was resentment and almost hatred of Louis and Duke? ... so when you're in a hole stop digging ... how could anyone hate Louis?

Elvis and The Beatles had stolen the music and the black kids wanted the Soul jazz of Ray Charles, Marvin Gay and Stevie Wonder ...

But some 'real' jazz was still heard, at the height of the British Invasion and their tour of America Louis sang 'Hello Dolly' and in May 1964 when the Brits succumbed to ‘Hello Dolly’ and many jazz fans triumphed into nostalgia ... Louis Armstrong made folks happy ...

'Louis Armstrong was the beginning and the end of American music' ...

By 1970s jazz had been buried by Rock ... and Jazz was beginning to look like a tributary of the blues rather than a separate American art form?

Miles Davis was involved in all the jazz innovations in the post bop era he died in 1991.

Fusion developed in the late 1960's and early 1970's as an attempt by jazzers to cash in on the remarkable success of Rock ... was all this back into the spontaneous rhythmic swing and Blues ... or a further search for an audience?

In 1967 Gary Burton, Jeremy Steig, Larry Coryell, and others had toyed with the idea of a kind of jazz rock fusion but it was Miles who was the undisputed leader of jazz fusion popularity.

In 1970 the Miles Davis groups started to play with amplified equipment in 'Bitches Brew' as Miles helped usher in the fusion of jazz and rock ... if you can't beat 'em join 'em ... was this an admission of defeat?

Miles Davis et al in USA moved through modern jazz experiments back into to Rock music. After Bebop, Cool, Funk to ... John McLaughlin (1942-)

'The Mahavishnu Orchestra' 1971 - after 'Bitches Brew' John McLaughlin (-) with his twin guitar had some success with his own high energy group playing mystical electric music.

'Weather Report' 1971 - Wayne Shorter (-) and Joe Zawinul (-) were a sensation in 1971 as 'Weather Report' followed 'Bitches Brew' with more experimenting to find an audience.

Brave attempts but to some they were not as fulfilling as the original innovations ...

'Syro Gyra' - Smooth Jazz pop, some other groups combined jazz and rock in a more pop oriented manner that made pleasant listening for background music ...

Pat Metheny an esoteric guitarist  ... and then The Crusaders, and the Yellowjackets.

Lennie Tristano (-) shifted keys and metres almost at will.

Jazz could not be redefined at will, Jazz had roots ...

Producers with electronic synthesizers were replacing musicians but many knew it was impossible to replace the Blues.

And with hindsight those pioneering innovations were all about spontaneous rhythmic swing and Blues ... there was no revolution just a slow evolution ... there was just one broad mainstream of Afro American music of which Jazz was a part ...

By 1980s it was impossible to believe that Jazz was alive and kicking, on the other hand R&B had spawned rock 'n' roll, soul, doowop, motown, Funk, Disco ... and rap! 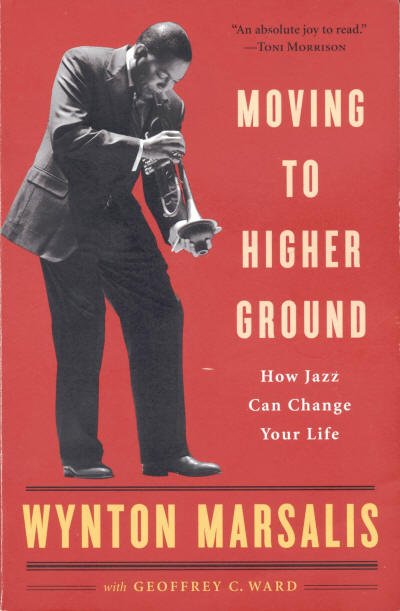 Neoclassicism. Trumpeter Wynton Marsalis achieved much popular success playing music that was based on styles modern jazz styles of the 1950's and 1960's but with a deep respect for the earlier innovators; Louis Armstrong, Duke Ellington and Charlie Parker. Encouraged by Albert Murray, Stanley Crouch and others he led the Musical Direction of jazz at the lincoln center ... and made an important contribution to Jazz education and understanding ...

Modern jazz was a mystery music to young Wynton, he was into Ray Charles, Marvin Gay and Stevie Wonder ... but his dad's friends were all into nerdy jazz and that was something different ... they all seemed to be a happy and friendly lot, always talkin' and listenin' ... they learned to make social sense of their creative improvisations ... empathy ... trust to share things? Wynton learned to listen, intensely, and eventually he heard the history of the blues; the instinctive, emotional back & forth rhythm concerning the fundamentals of human experience which never changed; love & hate, excitement & fear, happiness & sadness. The pressure of time forced spontaneity, there was no time for calculation, composition & orchestration. Diverse minds think through the same lifestyle problems and deal with them in the same way; hard work, honesty and investment. This way Wynton learned to play and to groove with others. He learned blues songs, he couldn't help it, he lived in New Orleans. But the kids were into funk and 'Trane and speed & volume. And so were the girls. But it was a gimmick. When he left New Orleans he invested the time to learn The Blues and understand that virtuosity was only a gimmick; folk played complex & fast because they could.

Jazz was much more than interaction and communication, it was deep emotional understanding of relationships ... empathy ... Jazz more than anything exposed the hypocrisy and absurdity of racism in America. How could anybody not love Louis Armstrong?

Wynton Marsalis and Jazz at the Lincoln Center have pulled jazz back to the Blues, improvisation & swing and rescued some modern jazz from an oblivion of incomprehensibility ...

'We all stand on the shoulders of giants, and like freedom & Democracy, once you get a taste and you're hooked for life'.

'Jazz teaches you how to listen to each other and make an honest attempt to understand. You have to work at it; if you can't follow me, I can't follow you following me'.

'When you improvise under the pressure of time and timing, what comes out is the truth! You've no time to fabricate lies'.

'Jazz is not playing scales on chords. There's no script it's a conversation'.

'Jazz is an endless road of discovery leading to acceptance of personal responsibility and a greater respect for others through a historical perspective'.

'You had to find something worth sharing with others, but your freedom of expression was directly linked to the freedom of others, they had something to say that was worth listening to. Sounding good provided solutions to the basic problems of living. Swing was a matter of manners'.

'You don't have to search far to find the Blues. Country & Western has its version of the Blues. So do Bluegrass and Funk. R&B is the Blues so is Rock 'n' Roll'.

'Later drummers started happily drowning out bass players. Bass players fought back with their louder amps. Piano players began playing short, choppy rhythms to battle with the snare, The rhythm guitarists gave up and went home. The horn players just went crazy fast and soloed all night long on one tune. The loss of swing is a great tragedy or American popular dance'. 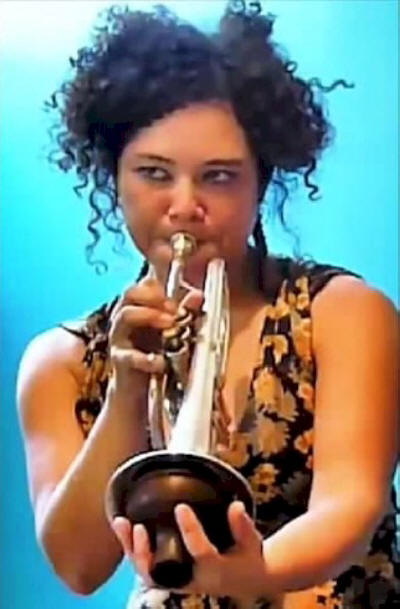 And reassuringly back on the streets of New Orleans the youngsters were still playing the old swinging improvised blues in 2014 ...

'It’s important to every single person in the band that we keep playing our own thing. If we stopped, something important about the band would be gone. We can take more risks and play more freely when we’re busking. No one’s telling us what to do or what to play; no one’s telling us when to start or when to stop or how much we should talk. It’s our time and we do what we want to do. It is our music.
We try to busk a lot, because it connects us to where we are and who we're with. We play for our own fun and other people's amusement. Some people often say, ‘What kind of music is that? I never heard that kind of jazz'. Of course we had never heard of this kind of jazz either, it was just what happened.
We had burned out on classical music; spending many hours practising in a tiny rehearsal room going over the same four measures again and again. We needed more social activity in our lives. Until we started playing the blues, we had never achieved such a special rapport playing music with other people'.