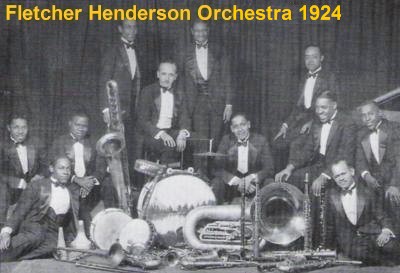 The Saxophone used to be the clown instrument and then Louis taught Hawk how to swing and the sax became expressive with a big sound. On the photo Hawk is on the floor, Louis seated just to his left ...

Fletcher Henderson had finest big jazz band of the 1920's before the rise of Ellington and Basie, and it was Henderson's arrangements that sent Benny Goodman to fame in the 1930's. 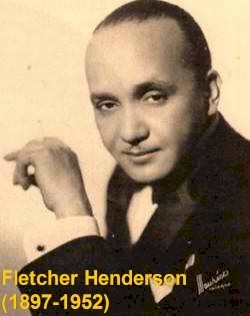 Fletcher Henderson (1897-1952) a science graduate from Georgia, but music was his passion, he was the real thing at The Roseland, Times Square. Playing for white dancers with Don Redman helping with the charts. The best since James Rees Europe.

In 1923 the music was polite & sweet at 'The Roseland' until Louis joined Henderson in 1924. Then Louis messed with time and taught the band to swing.

'The Roseland' was in elegant Manhattan and all white. For 20 years Fletcher Henderson was busy writing call & response patterns for three horn sections and rhythm. With his 'arranger' Don Redman this was innovation.

Over to the 'The Savoy' after close at 'The Roseland' and the jam fun started, black and white.

Luis Russell was also around with Pops Foster ...

Louis taught Hawk to swing ... did he also inspire Smack to swing his whole band?

His method for big band swing was to score for the interactions of 'the sections'; sax, trumpet, trombone and rhythm ... playng one off against another, call and response and riffing accompaniments ... all familiar stuff but Henderson did it beautifully and was brought in by John Hammond to help Benny Goodman to swing his band to global success!

But Henderson also learned from Art Hickman and Paul Whiteman ...

'Hendersonia - The Music of Fletcher Henderson and his Musicians - a Bio-Discography' by  Walter C Allen, 1973.

Art Hickman (-) at the Rose Room in the Hotel St Francis from 1913-20 did better. The furious faking was sweetened for popular consumption in the posh, white ballrooms. Spice was added to the refined strict tempo and variety replaced the conformity of the old stocks. Solos, call & response sections ... melody was added to the rhythm for dancing. Meanwhile in New York Ted Lewis was still pioneering the old novelty jazz.

Into the 1920s went Art Hickman, Ted Lewis and Paul Whiteman ... and Duke imaginatively, creatively, expanded Whiteman's approach and turned it into an art form. He endeavoured to 'make a lady out of jazz'. 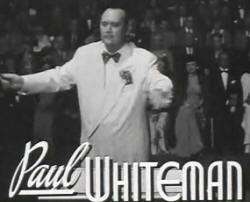 Paul Whiteman (1890-1967) - a white man from Denver Colorado who was more influential than the blacks of his era? He was the 'King of Jazz' in the 1920s as jazz came out of the dives; jazz was serious, and Whiteman was white. A school supervisor of music who taught Andy Kirk and Jimmie Lunceford. A classically orientated orchestra leader until he heard hot jazz. He heard the crude, raucous jazz & dance in the dives in San Francisco and was thrilled but didn't understand it ... he couldn't give himself up to the new rhythms he was too tight inside.

'Whispering' and 'The Japanese Sandman' were two early hit recordings ... but they were almost Sousa like but 'Whispering' sold more records than King Oliver ... and 'Avalon' was Puccini? But in 19?? 'Wang Wang Blues' was a little different ... 'Wang Wang' was not only recorded by Oliver & Ellington but also blues shouters, vaudevillians and hillbilly groups had a go?

Gus Mueller was from New Orleans and he didn't read -

'I once new a hot player who learned to read and then he couldn't play any more. I can't play your pretty music I play the blues' ...

In 1924 Whiteman prepared for a concert of 'symphonic jazz' in the prestigious Aeolian Hall, New York. He commissioned George Gershwins 'Rhapsody in Blue' and made his name.

Whiteman had 28 number one records during the 1920s and 32 during his career. At the height of his popularity, eight out of the top ten sheet music sales slots were by the Paul Whiteman Orchestra. He provided music for six Broadway shows and produced more than 600 phonograph recordings.

From 1840 to 1880 popular music was heard and distributed through the travelling minstrel shows to the enthralled audience.

From 1880 to 1920 sheet music was the favoured distribution channel from writer to the parlour piano or pianola.

From 1920 the phonograph took over and folk could hear a performance - Whiteman was with Victor, Isham Jones with Brunswick, Okeh had Vincent Lopez and Columbia had Ted Lewis. Wood shedding with a record became the way of building jazz chops.

From 1930 radio (growing throughout the 1920s) and the 1929 crash depressed the record sales. Radio reproduction of a live band was better and not limited to 3-4 minutes side. Radio and the microphone made the singers, Rudy Vallé's soft voice could be heard, and the crooners became an alternative to the blues shouters, and the vocal interlude an attraction. Over exposure meant pops weren't pops for very long?

After the rages & crazes of the ODJB and Paul Whiteman it is only appreciated with hindsight that the mainstream of jazz flowed through small group New Orleans music of Louis & the ragtime orchestrations of Duke!

Many of the new smaller jazz bands didn't appear in 'public' because prohibition destroyed the venues ... The Hot 5, The Red Hot Peppers, Bix & Trumbauer.

There were 'big bands' before the 1930s, James Rees Europe, Will Marion Cook, Noble Sissle, W C  Handy ... and in Chicago, Wilbur Sweatman, Erskine Tate, Doc Cooke, Carroll Dickerson ... and, of course, King Oliver's Dixie Syncopators ... but most was happening in New York and Jazz went with Louis to the Big Apple in 1926 ...

The Mound City Blue Blowers cut two songs in 1929 and swung with comb & paper. The leader was jazz musician Red McKenzie who joined the Whiteman Band in the early 1930s.

Punters at Connie's Inn & The Cotton Club were ogling black floor shows but the small 'rent parties' provided bread for Willie the Lion, James P and Fats who were in demand as were the smoother quieter blues of Tampa Red and Leroy Carr. Stock arrangements provided the rhythm urging your movement round the dance floor. Rudy Valée helped, prohibition  didn't.

Prohibition (1920-33) generated more drinking, looser morals and hoards of speakeasies ... but after the ODJB jazz craze prohibition destroyed the small venues for jazz ... the saloons and cabarets ... it changing the course of popular music until the emergence of Rhythm & Blues ... hot music moved to the ballrooms. The string bands tended to be sweet, the horn driven bands were hot.

In the 1920s when Louis recorded his small group jazz he was earning in the dance bands Carroll Dickerson's Sayoyagers and Erskine Tate's Vendome Theatre Orchestra.

Duke Ellington, his Washingtonians and orchestra

Then there was another guy ... one who Louis liked ...

Guy Lombardo (-) & his Royal Canadians with the murmuring undulating saxophones was a no frills white dance band, a favourite of Louis, and inspired by Whiteman. The sweetest music this side of heaven. In Chicago in 1927 he owed his success to radio hook ups, which filled the Granada Café and 'Charmaine' became a hit. And Guy Lombardo became the most popular dance band of the century. 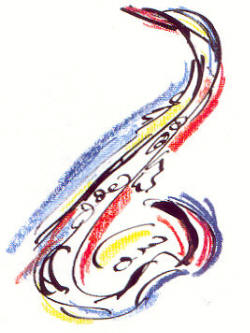 The Saxophone. There were three ways to play Jazz on the saxophone - 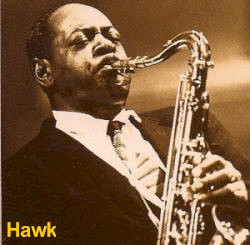 Coleman Hawkins (1904-69) was taught to swing by Louis Armstrong in Smack orchestra in 1926. Bean played the changes. He was respectably hot with a huge wide tone and he studied hard. Emphatic swinging beat.

Hawk played deep down in his boots, standing upright as a giant, supporting his massive lungs, then shaping, coaxing and building a big round resounding sound ... no slap stick tonguing for him, he didn't blow belches into his horn ... he relaxed, listened and presented with impeccable timing his beautifully crafted tones for all to hear ... Hawk took his songs apart and then reassembled them, exquisitely ... with almost a swagger. 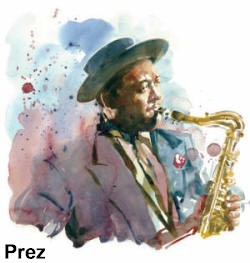 Lester Young (1909-59) was born in Mississippi, moved to New Orleans, and made his mark in Kansas City ,introspective but influential with the Count Basie band in 1933. Prez sang the lyrics of the American songs of the 1920s, 30s and 40s into his horn. He was beautifully cool with a light personal tone and he was laid back in a lazy dream. Ephemeral flowing trajectories. Feather light but swingin' hard. Remembered for his raw unbridled emotions as he exposed his soul in a narcotic haze in a series of recordings with Billie Holiday. Lester's sound was a direct influence on Charlie Parker. But it the early days Lester was persecuted because he didn't sound like Hawk! 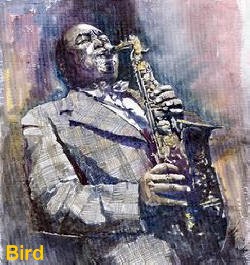 Charlie Parker (1920-55) was complicated; Bird flew through extended chords and mangled time. He was cuttingly disrespectful with a cutting angular tone and he was all soul & fire, heart & intensity. Quizzically exposing inimitable phrases. Bird's brain was as fast as his fingers at incredible speed, powerful phrases leapt at you as unexpected punch lines that no one knew were coming.

Rollins followed with hard bop ... Coltrane took over Bird's crown ... but the Jazz mainstream went cool, got lost and died in fragmentation and fusion with Miles et al ...