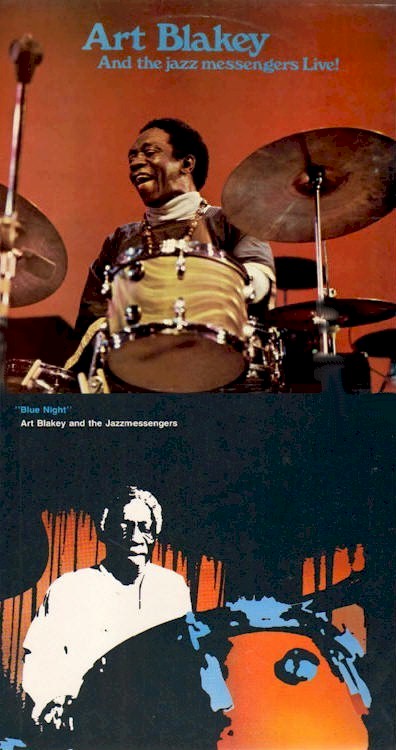 Gospel had moved North with the black Diaspora. The churches and the blues singers were in the big cities. Still moving down a fifth via the flat 7th 5th & 3rd, including plagal Amens and flirting with the subdominant. The music 'preached' with close 'Barbershop' harmonies and secondary dominants giving the music a smooth rhythmic flow.

In 1950 the swing musicians seemed confused. Bird's Bop revolution didn't kill Swing nor Dixieland they both continued with Ellington, Basie and Armstrong. The Dixieland revival had bloomed and although Bop was still king, 'cool' jazz was on its way.

Things were looking up for jazz. Schools across the US had Dixieland bands and jazz was starting to be considered more legitimate. A good jazz player could make a decent living and people were less and less opposed to mixed coloured bands.

However, by 1952 not much new had happened and bop was getting old and fragmented into 'Hard' and 'Cool' schools as west coast Jazz gained in popularity.

Art Blakey (1919-90) learned his trade with the Billy Eckstine Band and the beboppers, he led bands from 1947 and recorded for Blue Note. The name 'The Jazz Messengers' was adopted in 1955. The band was a reaction to the white west coast 'cool' music which, although very popular, was breaking away from the blue jazz traditions.

Art Blakey rescued Bop from estrangement and drift into white commercial music. This 'Hard Bop' backlash against cool in the 1950s maintained the rhythmic drive of bebop but was all Blues. He reintroduced earthy, thunderous, back gospel blues into the music, always filled with joy, always foot tapping stuff. Folk who could not relate to Bop were dancing again. Bringing the kids back to jazz from 'Rhythm and Blues'.

The 'funky' jazz used simpler harmonies, with an emphasis on rhythm, easily recognizable tunes, and anything else that players like Horace Silver could invent to increase the audience's involvement and pleasure ... often blue notes were replaced by minors.

Charles Mingus (1922-79) developed 'Hard Bop' into compositions but had only fleeting and temporary success.

Wynton Marsalis (1961-) consolidated and enhanced the teaching of The Blues in the jazz tradition.