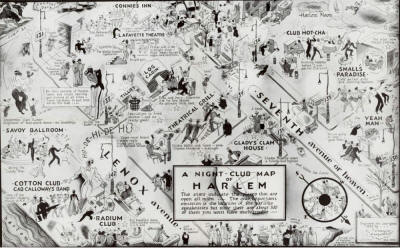 1917 ODJB were a sensation at Reisenweber's. But made a short lived contribution to the New York scene.

By 1920 James P Johnson, a local lad, had established Jazz as Harlem stride piano, with Willie 'the Lion' Smith' and others close behind.

Fletcher Henderson arrived at The Roseland in 1923 and then with Louis Armstrong from 1926.

But it was another East Coast man who made Harlem his own ... 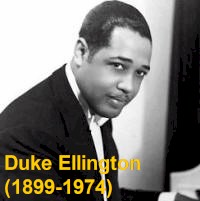 Edward Duke Ellington (1899-1974) was born in Washington, 7 months after George Gershwin. Daisy raised him as a gentleman who could do anything without barriers.

At 14 he was into Ragtime and on the pull. Young Duke with 'Soda Fountain Rag' and 'The Duke's Serenaders'.

At The Hollywood Inn, off Times Square, Elmer Snowden, on the banjo, and the Washingtonians. But he had heard New Orleans jazz ... and took over the band. Bubber Miley was recruited and the sweet stuff went out of the window.

The Holiday Inn was renamed The Club Kentucky, with The Washingtonians now inspired by classically trained Will Marion Cook just to be themselves.

'The Club Kentucky', off Times Square, was always competing for the punters with 'The Cotton Club' in Harlem.

There was ragtime, stride and the blues from Bechet and Louis. There were 5,000 'speakeasies' in Harlem ...

The Cotton Club - the girls; tall, tanned and terrific.

With the help of Irving Mills, Duke opened in 1927 and made a name with 'jungle music' ... then Hollywood and the film 'Check and Double Check' ...

1939 Duke was in Europe again and rapturous reception proving rhythmic artistry without commercial populism was alive and well.

1941 Billy Strayhorn and RCA recordings, everything comes together.

1943 Duke keeps going through the war. No discipline, chaotic but brilliant musicians free to innovate producing brilliant cohesion. Individual voices and extended form at Carnegie Hall, 'Black Brown and Beige' ...
Duke on the road but key musicians left and even Duke was in trouble by the mid 1950s ... but then Duke was born at The Newport Jazz Festival in 1956 ! 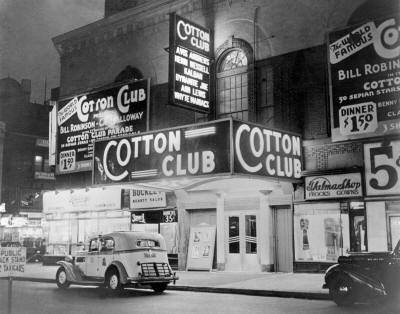 Did Rockin' in Rhythm have cartoony saxes?

'Duke Ellington in Person: An Intimate Memoir' by Mercer Ellington, 1979.