Saxophones used to be clown instruments and then Louis taught Coleman Hawkins how to swing and the sax became expressive with a big sound.

A New Orleans sax player, Lester Young was gigging round the South with 'The Original Blue Devils' and he like many others gravitated to Kansas City like a magnet.

In Kansas City Major Prendergast encouraged the vice clubs to prosper even during the second Roosevelt depression and every club needed musicians. They all wanted to play stomping, up tempo blues with shouters, head arrangements and riffs. Everyone could play the blues ... all night every night ... expressive individualism, Lester, Hot Lips, Sweets, Mary Lou, Jay McShann and a kid from Red Bank ... Count Basie. 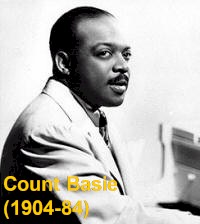 Space and time and what a rhythm section - Jo Jones, Walter Page, Freddie Green and Bill Basie ... 'The Barons of Rhythm'. 'Blue Balls' respectfully known as 'One O'clock Jump'.

But it all started in the organ pit accompanying silent movies and a prized opportunity with 'The Blue Devils ... and then Katie Krippen (1895-1929) who sang the blues; 'Bird Man Blues' ... and another flame Gonzelle White (-). Kansas City was an incredible 'open town' which ignored national prohibition and did its own thing for good time seekers and jazzmen. When the heavy hand of regulation is removed magical things can happen ... Bill Basie had always considered himself a stride man in New York ... he did the shows and the follies and the dancers and he hit the joints ...

But in KC there was Andy Kirk and Benny Moten ... Basie started with supplying a few arrangements and as a stand in piano man ... and Cab Calloway was sniffing around ... Basie 'stomped' the blues up tempo, but not fast, you felt them. Hot Lips joined to make it bluesy, then Blue Devil Walter Page, then Ben Webster, Eddie Barefield ... then Moten left and the Count took over a 'commonwealth' band.

One night in 1936 John Hammond heard a local radio broadcast from 'The Reno Club' in Kansas City ...

Lester was inspired by Frankie Trambauer, and his soft airy tone was always 'telling a story', but in partnership with Billie he really prospered.

Basie recruited Billie Holiday in 1937 and eventually settled at 'The Famous Door' in 1938 and secured the recognition he deserved.

Mary Lou Williams played with Andy Kirk's Clouds of Joy and wrote for everybody.

1939 Basie was proving jazz with a rhythmic precision and definitive pulse was alive and well without any concession to popular commercialism.

1957 'Sounds of Jazz' - Billie and Lester recorded for the last time.