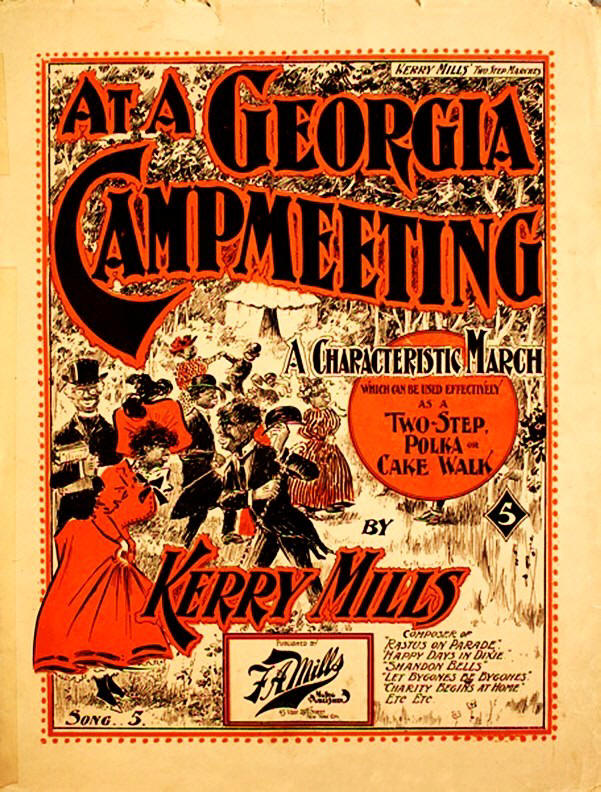 The second influence on the evolution of jazz was the music from the European Christian churches which became heavily influenced by black participation.

Up to 1865 slavery in America involved restrictions on the black workforce in a vain attempt to maintain tranquility. Obviously there was no problem with the negro work songs which were considered a boon to productivity. And singing on the stoops was unstoppable and harmless. But native languages, drumming and pagan religions were no nos. However Christianity was another matter and drumming & dancing in Congo Square were acceptable under French colonial rule and even encouraged as tools of control? There was also some productivity benefit associated with morale building and entertainment value to be had from music & dance?

Both work songs & Congo Square had important effects in Africanising the music of the church services & the camp meetings with distinctive song and rhythm ... pentatonic scales and raw, rumbling rhythms ... kinda loose ...

'The Great Awakening' around 1850 involved the 'black' songs of the camp meetings which produced the Spirituals of the Old Testament and the 1st 'pop songs'. Often these were 'freedom spirituals' associated with the search for a route out of slavery, perhaps influenced by the Exodus tradition of the promised land in the Bible.

the call and response of the work songs was close to the Minister 'lining out' with congregation involvement ... the repetition of the words allowed those who could not read the opportunity to participate in worship. Hymns and sacred songs were lined and repeated with a call and response pattern, building on the old field chants which had the same shout & chorus style with repetitive syncopated rhythms. 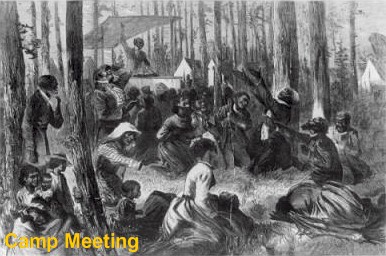 A rich musical mix ... the ring shouts, field hollers, and holy roller spirituals and Blues of early slaves drew on common elements of African music, the drum beat, vocal call & response and improvisation. 'Speech song has been part of black culture for a long, long time'. The churches also used hand clapping and foot stomping as participative rhythmic accompaniment. Guitars and tambourines were also around. Most of the singing was done a cappella. Church choirs became a norm only after emancipation. 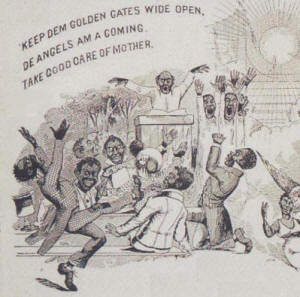 The 'Happy Clappy' 'Holy Rollers' were everywhere ... the Sunday Morning Service was close to the 'Saturday Night Function'.

Throughout the period African influences relentlessly found their way into all black popular music, folk music, minstrel music and spirituals ... the call & response inflections of the work song with black intonation, rhythm and timbre were merged into European folk songs and into the spirituals of the Church heard all over the South. 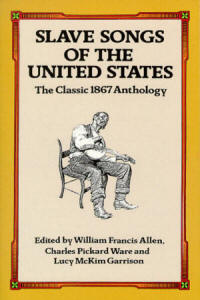 'Slave Songs of the United States' edited by William Francis Allen, Charles Pickard Ware and Lucy McKim Garrison, was published in 1867. A splendid record of the musical life black folk in the America during slavery. The introduction was right on the nail -

'The musical capacity of the negro race has been recognized for so many years that it is hard to explain why no systematic effort has hitherto been made to collect and preserve their melodies. More than thirty years ago those plantation
songs made their appearance which were so extraordinarily popular for a while; and if 'Coal-black Rose', 'Zip Coon' and 'Ole Virginny nebber tire' have been succeeded by spurious imitations, manufactured to suit the somewhat sentimental taste of our community, the fact that these were called 'negro melodies' was itself a tribute to the musical genius of the race. There is no singing in parts, as we understand it, and yet no two appear to be singing the same thing. The leading singer starts the words of each verse, often improvising, and the others, who 'base' him, as it is called, strike in with the refrain, or even join in the solo, when the words are familiar. When the 'base' begins, the leader often stops, leaving the rest of his words to be guessed at, or it may be they are taken up by one of the other singers. And the 'basers' themselves seem to follow their own whims, beginning when they please and leaving off when they please, or hitting some other note that chords, so as to produce the effect of a marvellous complication and variety, and yet with the most perfect time, and rarely with any discord. And what makes it all the harder to unravel a thread of melody out of this strange network is that, like birds, they seem not infrequently to strike sounds that cannot be precisely represented by the gamut, and abound in 'slides from one note to another, and turns and cadences not in articulated notes.
It is difficult to express the entire character of these negro ballads by mere musical notes and signs.
We must look among their non religious songs for the purest specimens of negro minstrelsy. It is remarkable that they have themselves transferred the best of these to the uses of their churches. I suppose on Mr Wesley’s principle that ‘it is not right the Devil should have all the good tunes.
In other parts of the South, 'fiddle-sings', 'devil-songs', 'corn-songs', 'jig-tunes' and what not, are common; and all the world knows the banjo, and the 'Jim Crow' songs of thirty years ago' ... quite so ... 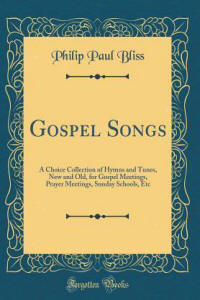 In 1874 a songbook entitled 'Gospel Songs: a Choice Collection of Hymns and Tunes' was published.

The songs were easy to grasp and sing and less involved than the traditional church hymns. 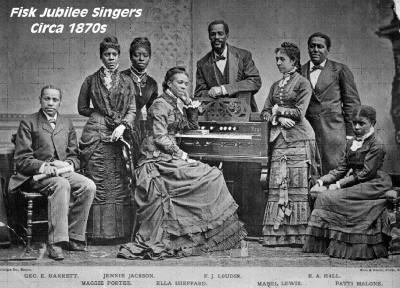 Around the same time more spirituals were published and popularised by the Fisk Singers of the University of Tennessee.

The Jubilee Singers from Fisk University, Nashville were a popular touring group with a repertoire that included arranged Spirituals offered as harmonised slave songs from the plantations. Typical of vocal groups and the congregation - 'Keep Me from Sinking Down', 'O Brothers don't Stay Away', 'Battle Hymn of the Republic', 'Go Down Moses', 'Steal Away to Jesus' ... other popular Spirituals - 'Bye and Bye', 'Down by the Riverside', 'the Saints', 'Joshua fit de Battle of Jericho', 'Nobody Knows the Trouble I've Seen', 'Roll Jordan Roll', 'Gimme that Old Time Religion', 'Lord Lord Lord', 'Over in Glory Land', 'Lonesome Road', 'Lord let Me In the Lifeboat', 'Walk through the Streets of the City', 'Over in the Glory Land', 'Michael Row the Boat Ashore' ...

Although black performers had often dazzled white audiences with their musical abilities they played white European music. The Fisk singers were possibly the first black group to present black music (1871) to white audiences.

Popular Hymns - 'Just a Closer Walk with Thee', 'Just a Little While to Stay Here', 'Nearer My God to Thee', 'Flee as a Bird to the Mountain', 'Take my Hand Precious Lord' ...

NB Gospel songs were from the New Testament and appeared later than the Spirituals and they have a white and a black tradition. The white tradition developed into the hillbilly country music of the Appalachians and the black tradition aligned itself to the blues mainstream.