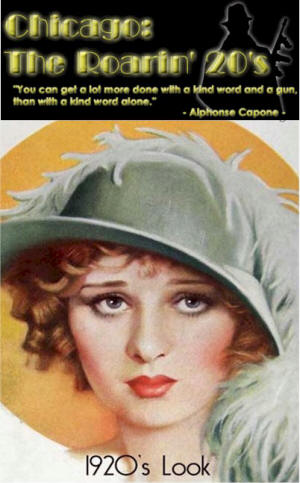 New Orleans music migrated up the Mississippi to Chicago and the Jazz Age (1920-29) blossomed, but by the end of the decade 'headquarters' had moved to New York. The days of slavery were long gone the black jazzers were free to travel.

In 1917 Storyville was closed down and travelling musicians flooded out of New Orleans. Soon over 40 of the well known jazz players moved on to Chicago. That's where the jobs were.

In 1919 the 18th Amendment to the Constitution was ratified and it became illegal to distribute and manufacture distilled spirits in the United States. From the closing of Storyville to prohition and Al Capone.

In 1929 when the depression hit New York was the only hope.

In 1915 Tom Brown's Ragtime Band, an all white group played at Lamb's Café in Chicago ... 'jass' was a moniker first used to denigrate these successful invaders from New Orleans!

The ODJB relocated to New York in 1917 and became a sensation at Reisenweber's Restaurant. 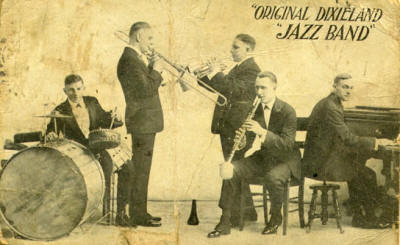 These boys were 'faking' in a wild frenzied 'Turkey Trot' all over again ... they worked out what sounded good as their own part and played it over & over and faster & faster ... this wasn't improvising creativity like the blues men it was technical brilliance from the wood shed.

And inevitably everyone scratched around trying to claim the credit for the 'invention' of jazz ... which included law suits over the copyrights of the tunes. 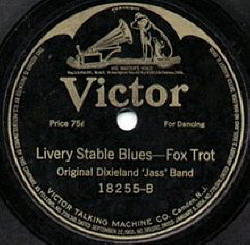 'Back Home again in Indiana' and 'At the Darktown Strutters Ball' followed.

New Orleans Rhythm Kings - picked as the most influential

The music was new nothing like classical music, nor sweet dance, nor Sousa's marches, nor piano ragtime but it began to spread to Chicago, to California, to New York ... and around the world!

The band established the music at Schiller's Cafe in Chicago and Reisenweber's Restaurant in New York and were largely responsible for popularising the new music from New Orleans.

'The frenetic element of early ODJB recorded jazz is probably due to the dance style prevalent at that time - a one-step, which is a fast walking dance. That tempo and rhythm isn't particularly suited to the jazz style of playing. By the time of their 1921 sides, the foxtrot has replaced the one-step in popularity, and the music has smoothed out. Chicago possibly did have some influence on that, because around the time the ODJB started playing in there, the Juvenile Protection League waged a campaign against too-slow dancing in public places (especially public dance halls). The intention was to protect the morals of young girls, authorities decreed that tempos should be 20 bpm faster than usual. New York and some of the other large cities had similar laws, but significantly New Orleans did not'. 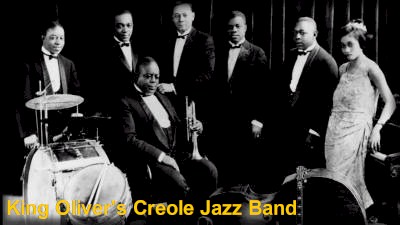 1923 King Joe Oliver and Louis with the creole jazz band at Lincoln Gardens, on the South Side. Rocking rhythm, punchy lead with harmonies behind the lead. 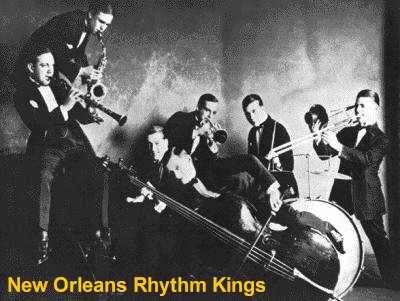 Typical of the New Orleans - Chicago movement were the guys who established the New Orleans Rhythm Kings in Chicago. Paul Mares jumped at the Chicago dream and led the move out of the declining south to buzzing Chicago.

In 1922 the NORK took the ODJB's music further, a fresh repertoire, swinging ensembles and a more advanced rhythm section. More smooth, legato, 'serious' music than the brash, fast 'novelty' act associated with the ODJB. Jelly Roll Morton sits in with the NORK and helped to break down the colour barriers.

The Austin High gang were inspired by NORK and followed their records in 'The Spoon and Straw' ice cream parlour, west side ... and went to Lincoln Gardens and heard King Oliver.

The Wolverines were the heirs of NORK.

Bix Beiderbecke (1903-31) heard Louis on the riverboats at Davenport and was hooked. Played along with ODJB records recorded with the Wolverines in 1924, joined Tram in 1925, Jean Goldkette in 1926 and Paul Whiteman in 1927. Drowned in booze at 28 years old. 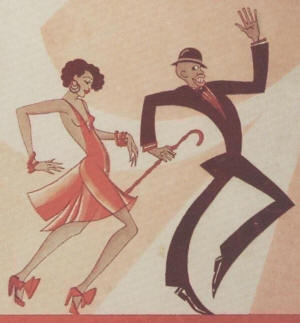 The Jazz Age moves to New York - speakeasys become numerous and offer numerous opportunities to jazz musicians. By 1927, Coleman Hawkins loses his 'slap tongue' style of playing tenor sax. He learns from Louis and starts improving by using the notes of chords in the song instead of just basing the improvisation on melodies in the song. This new style was less coherent, but a big step leading to more modern forms of jazz. Towards the end of the 1920's Classic Blues declines as Swing gains in popularity. Also dying was the New Orleans style music. Armstrong drops the New Orleans style and with it many of his players from New Orleans.

At the end of the 1920's the Great Depression hit.