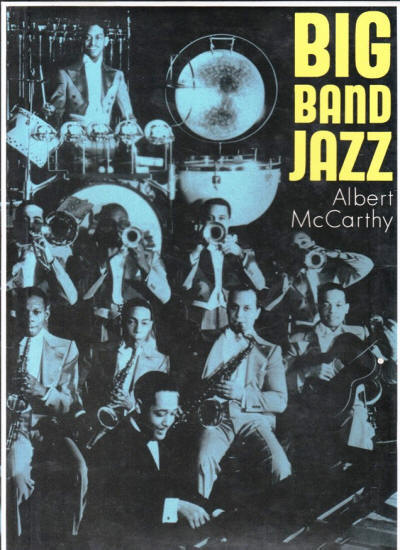 Although Minstrelsy, Ragtime and the ODJB were national crazes ... the Swing period was the only time that Jazz and popular music coincided?

After 1929 Louis and Duke escaped the downturn as record companies and players went bust. Oliver, Morton & Bechet went down the pan.

From 1928 'Free' national radio took over the marketing of music and only a few hot spots like 'The Savoy Ballroom' in Harlem survived.

And the Jukebox was part of every commercial gathering.

Everyone wanted to escape the gloom and went into dancing and the 'free float' of Louis 'above' the mundane hustle and bustle.

Swing groups grew to 10 or more players with at least three saxophones, two or three trumpets, two or three trombones, piano, guitar, bass, and drums. As swing bands grew in size they had to emphasise precision over improvisation. The rhythm section was responsible for keeping it all danceable (as that's where the money was). The 'hot' style of Ellington or Basie offered hard-driving rhythms and solo improvisations, unlike the 'sweet' bands of Guy Lombardo or Glenn Miller.

Fletcher Henderson, Duke Ellington and Count Basie were the tops ... but four other bands captured our ears ...

A hunchback from Baltimore, Chick Webb drummed up swing and employed Ella Fitzgerald.

He out swung Goodman at a battle of the bands at the Savoy and went out with a fling as his health finally caught up with him, a mere 37 years old.

Ella goes from strength to strength with Chick's band after he dies.

Born in to abject poverty Benny had unbridled determination & ambition. He practised everyday for ever. Played with Ben Pollack.

In 1933 F D Roosevelt's new deal for the American people was a 'confidence trick', prohibition was repealed to raise spirits and fresh air hit the speakeasies, the first legal brews were so bad everyone wished prohibition was back!!

Billy Rose opened an extravagant night club to attract home drinkers back to the legal night clubs. Billy Rose hired attractive Helen Ward and Benny. Goodman had been fired by Pollack and was fiercely ambitious ... inspired by Chick Webb and Fletcher Henderson he gathered a white band together to compete.

Then 'Let's Dance' three hours of radio music sponsored by the national biscuit company! But his 'book' was not extensive so Mildred Bailey and John Hammond produced Fletcher Henderson to do the charts. Now the 'swing' music developed at the 'Roseland' and 'Savoy' was broadcast nationally.

Then the Palamar Ballroom LA and nationwide fame.

1936 dancing and records and two weeks at The Paramount Theatre, Times Square, establish Goodman and swing as America's 'popular music'.

The Jitterbug and The King of Swing ... Henderson's Goodman charts were orchestrated Louis ... and Goodman employed black musicians.

In 1938 Billie Holiday left Count Basie for Artie Shaw, but soon left after racial abuse on tour. Billie went back to New York and sang in the clubs, 'Strange Fruit' ...

Benny had swing and the blues but Artie was technically supreme, wonderful tone, lyrical and erudite. 'Begin the Beguine' makes Shaw more popular than Goodman.

'You are aiming at something that cannot be done, you're trying to play a horn and here's this clumsy series of keys on a piece of wood and you've got to manipulate them with a reed and throat muscles to make something happen that never happened before, a new sound that creates an emotion. An inarticulate thing makes notes that come out in a way that moves you and others. You know when it's right and something you achieved ... but it very rarely happens and when it does you remember it for the rest of your life ... the most exuberant experience ... it beats everything'

1939 Shaw disbands 'the business part of the music stinks'.

Teddy Wilson jams with Goodman, then record trios as soul mates, then in 1936 into the public band also with Lionel Hampton as the trio becomes a quartet. Then Cootie.
But swing was too 'commercial' not only for Artie Shaw but also for many jazz fans.

1938 Goodman made Carnegie Hall but his band then disintegrated under the pressure of 'The Ray' and Benny's apparent disapproval.
1939 Charlie Christian provided a second coming.

There were plenty of other outfits of note -

Woody Herman and his Band that plays the blues.

Bob Crosby and the Bobcats.

Kay Kaiser and his College of Musical Knowledge.

By 1940s the Juke Box was more important than record sales.

By 1946 the tyranny of 'popular' taste diluted Big Band Swing and the thrust of popular music veered towards the vocalists and sweeter music, Bing Crosby, Frank Sinatra and Ella Fitzgerald.

Although Ellington remained, and Basie was discovered, the big bands broke up and jazz continued in small groups and in the developing sounds of Bebop from Mintons ...

The American story of Big Band Swing has been told many times but in England things were very different. This side of the pond there were British Dance Bands.