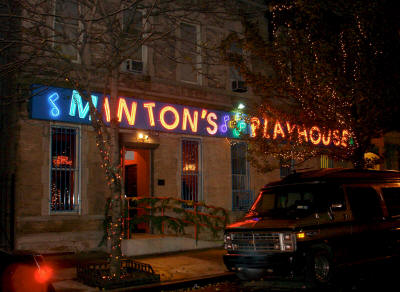 Around 1940 Big Band Swing was still going strong after prohibition and Paul Whiteman had driven jazz into the big bands in big ballrooms. But creative jazzmen were always restless and out of the big bands came small improvising hot groups ... here the mainstream of jazz thrived, swinging improvised blues. Big bands did not come out of Jelly Roll Morton & The Red Hot Peppers, rather from Louis teaching Coleman Hawkins & Fletcher Henderson how to swing.

Sure the schmaltz of the sweet big bands continued for dancing ... and for the vocalists. In August 1942 Frank Sinatra went solo. Basie in Kansas City had shown that creative jazz based on the blues was both attractive and popular.

But somehow big band commercialism was an unnatural development which did not snap back to the blues of the jazz mainstream after the war. At this time swing was at its climax but was doomed to fall.

WW2 draft broke up the big bands and opened up competition to new ideas. The country was nervous, and the music was nervous and agitated.

a group of dedicated and brilliant musicians began new things at Minton's Playhouse in Harlem with a Kansas City alto player Charlie Parker and a reclusive piano player Thelonious Monk.

For sure something special was happening at Mintons ... Bebop became the first sub genre of the jazz style that was not used for dancing. In 1942-4 a recording ban made the development of the new Bop something of a romantic mystery ... even to this day ... but clearly Bop grew out of the small band swing groups as more complex harmonies and phrases began to be played by saxophonist Charlie 'Bird' Parker and his mates.

Charlie Parker (-55) was the father of bebop, a genius poisoned by heroin at 34 years old.

Charlie Parker was a Kansas blues man who heard and played things unknown as he wrestled with the sounds in his head, he experimented and learned that any note could be resolved from the upper thirds of the chords ... he could fly ... Bird gave the Bebopers phrasing !

A gang used to gather after hours to jam at Mintons, simply for the pleasure of playing with one another ... resident were Thelonius Monk and Kenny Clarke but others were soon drawn in to a magic circle - Coleman Hawkins, Chu Berry, Don Byas, Milt Hinton, Charlie Christian, Mary Lou Williams, Lester Young, Ben Webster, Roy Eldridge ... then

Dizzy Gillespie (-) was first in Bird's group, Dizzy was disillusioned within the confines of Cab Calloway's commercialism but loved Roy Eldridge and yearned for something new. Diz was an intellectual, he studied and understood technical harmony but he wasn't a big blues player he had an endless flow of ideas and played faster ...

Bird left Jay McShann in Kansas in 1942, and joined Dizzy in The Earl Hines Orchestra and a chronology emerged ...

1943 Bird and Diz with Earl Hines and the recording ban and the Jam sessions were a lifeline.

1943 Harlem riots, The Savoy closes and jazz moves to the safety of the Westside and 52nd Street - Jimmy Ryans, The Onyx, The Famous Door, The Trock, The Downbeat, Spotlight, Three Deuces, Kelly's Stables ... all styles, Billie and junk prosper ...

1945 the clarinet was almost out of the picture when it came to jazz. The expressive saxophone was king in the bands. Even brass players were forced to take notice as the sax.

1946 Bird in trouble after the Billy Berg gig in LA and Camarillo.

1946 the first vinyl record was produced.

1947 trying to be clean Bird opens at 'The Three Deuces' with Miles Davis. Everyone wanted to play like Bird.

1949 Bird in Europe was a celebrity but back home he tries to play with Strings great music and more popular but the younger musicians talk of a sell out. Parker was a Blues player.

1949 Birdland opens and although everyone want to play like Bird, a role model with his phasing and unfortunately with his 'dope'. Dope sucked them all dry ... imagine what the music would have been like without 'horse'.

1954 Bird's daughter died and accelerated his own rapid demise at 34 years old the following year.

On March 4, 1955, Charlie Parker performed in public for the last time at Birdland. On the 12th he died of heart seizure, hemorrhage, and general bad health. A life unlived.

Melody - The phrasing was 'jagged' and 'angular' and full of fast triplets and sixteenths, the melodic line spiced with unexpected accents. Eighth notes become straighter in faster songs even though players used more off beats.

Trumpeter Dizzy Gillespie played songs at fast tempos based on the chord progressions of popular songs such as 'I Got Rhythm', 'Cherokee' or 'How High The Moon'. Songs which were not intended to be dance music. The improvisations were based on scales implied by those chords, and the scales used included alterations such as the flatted fifth. He started using major thirds over minor changes when he recorded 'Pickin' the Cabbage' in 1940. On 'Bye Bye Blues' he uses a diminished ninth. Gillespie and Parker occasionally started and ended phrases on the 2nd and 4th beats; 'playing offbeat'.

Another achievement of 1941 was when Roy Eldrige joined Gene Krupa's band and became a black performer accepted into a white big band.

Regular use of the upper notes of the chords, 9ths 11ths 13ths gave added freedoms to the melodic line. The semitone approach to the chord note from above in addition to the lead from below led to chromatic chord movements in the harmonies, complicating the sequence but supplying smooth forward momentum.

Harmony - A general trend in 'orthodox' music had been to employ more chord notes - from unison to octaves then fifths and fourths then thirds then more thirds. The same pattern was clear in jazz. Substitute chords were also used to add colour ... again this was nothing new in orthodox music but the Boppers understood why it worked ... although it required a better instrumental technique which provided an elitist impetus to the music, the lines were still resolving onto the base line. These ideas were new to jazz improvisation but they were still 'playing the changes' ...

Rhythm - As always in jazz the rhythmic developments were the most important; the subtleties of accent, timing and division of the beat. Fast songs become faster while slow songs become slower.

The regular four to the bar moved from the bass drum to the ride cymbal to lighten and speed up the beat. The bass drum was effective for accents, 'dropping bombs'. The beat had a better flow. This was similar to the earlier shift to lighten the beat when tuba and banjo moved to bass and guitar and the high hat complemented the bass drum.

Swing had been dominated by 100 to 200 beats per minute, Bebop went to 300 bpm. At these tempos uneven division of the beat was impossible for all but the most skilled players and strings of even eighths became the norm, reversing one of the earlier innovations of 'swing' ... but Parker did not succumb to the eighth note strings, instead of 'displacing' eighth notes over a single beat as the swing players did, Parker was displacing whole jagged phases away from the beat ... resulting in an extended escape from the ground beat ... this detachment was emphasised by starting and finishing phrases on the 2nd and 4th 'off beats' ... again not a new idea but taken much further by the Boppers ... this sift of time was a main innovation of bop often making it impossible for 'swing' musicians' to play the music ...

Kenny Clarke and the drums more and more were 'commenting' on the solo line of the horn.

The development of bop led to new approaches to accompaniment as well as soloing. Drummers used less bass drum more cymbal and hi-hat.

Bass players took over the pulse freeing the left hands of the pianists.

Bop had a standard form; play melody in unison, take turns playing solos, then reunite for melody again. This was bad form as it was the interplay between instruments and the interplay between sections which was the essence of traditional jazz. No wonder dancers were left cold and audiences bored.

Although Bird was a genius and still playing the blues and 'Indiana', 'Cherokee' & 'I Got Rhythm' ... and urging you to join him ... a superb intensive swing jazzman; one of the three jazz great Louis, Duke and Bird. And one of the three great saxophonists jazz; Hawk, Prez and Bird ...

But he was a tragedy ... the man and the music ... the music was not for dancing, the boys & girls didn't respond the same way ... this music took effort and when you got there you found the girls had been left behind ... many felt like isolated nerds ...

The music was difficult, some said deliberately so, to keep the other guys off the stand, it was a musicians music, the tempos were fast, the changes frequent, the resolutions complex, the phrases sharp ... egotistical virtuosity ... most ordinary folks could no longer empathise ... and Bop ran into trouble ...

There was bitterness, even hatred around ... the music was undermined by drugs ... it was misunderstood by 'hippy' 'fashionable' whites ... 'mouldy figges' were denigrated and incomprehensibly supporters started to criticise Louis as 'Uncle Tom' ... audiences disappeared.

This jazz became elitist and very difficult to play & understand ... the mainstream of popular American music went into the blues stream; Rhythm and Blues, Soul, Rock 'n' Roll and on to Rock and its derivatives ...

Bop was was attentive, listening music and Wynton Marsalis noted,

'Jazz is dance music. The closer you get to body response, the more the music is going to swing and the better it is going to feel. If you play in a concert hall sometimes people seem afraid even to tap their feet. You don't know if you're swinging or not.'

After Bird's death Miles Davis met up with Gil Evans who was writing 'cool' arrangements and jazz was led down another path ...