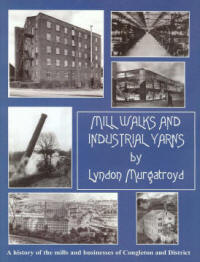 Lyndon Murgatroyd, in his wonderful book about the mills of Congleton, records that Nathaniel Barton built Salford Mill, a silk mill at the bottom of Rood Hill around 1848. From 1890 to 1893 Salford Mill was used for fustian cutting by Edward Knapper ... and Edward & George Knapper occupied Bridge Mill, Royal Street from 1896 to 1906 as fustian cutters.

Who was Edward Knapper?

Phil Walton's superb website details an abundance about the Knappers! Phil has traced an epic migration of Knappers to Congleton ... a story of large, very large, families and a search for lucrative work in collieries and in the silk & fustian mills.

He married two girls from Audley, Jane Hancock in 1757 and Mary Adjett in 1761, and he managed extraordinary issues, 2 from Jane and 11 from Mary, 13 kids, what a man!

William died exhausted, in Audley in 1797. 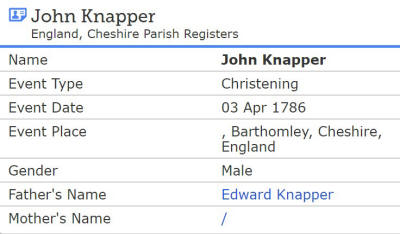 - John Knapper (1824-) the sixth born was baptised in Sandbach close to Wheelock.

Most of the Congleton Knappers were descended from John & Hannah. 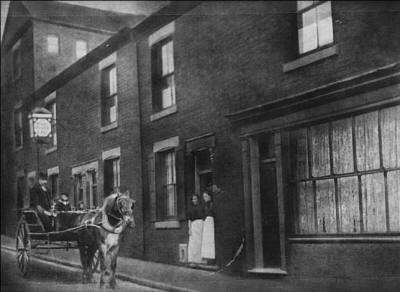 Or was Daniel a cousin from one of Maria's two eldest brothers, Sons of Charles Knapper (1774-1841) & Mary? Possibilities were - 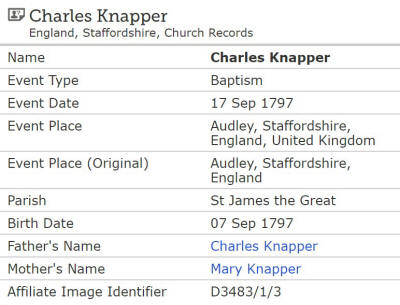 Not much room for Daniel in this lot!! 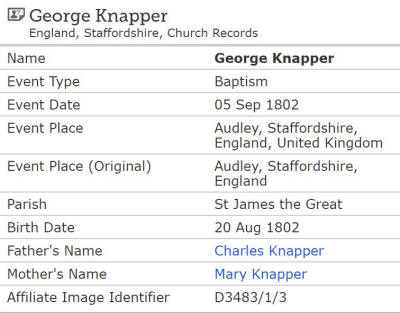 Witnesses at the wedding were ?? Steele and John Halsall.

Where were Hannah and Eady?

George & Hannah Taylor were more of a mystery ...

Granddad Charles and g-granddad William were easier to fathom ... 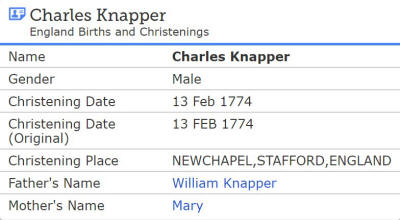 Charles and Mary Napper's children were -

William Knapper (1735-97) the dynasty leader was born in Talke, Staffordshire around 1735.

Daniel Knapper (1826-92) married Eliza Jenkins (1828-95) at Christchurch, Tunstall on the 29 July 1850. Daniel 23, Puddler, from Tunstall, Eliza 22, spinster from Kidsgrove, Brieryhurst, Daughter of Thomas, Miner. Daniel's father's name was not recorded and there was no baptism record. Why?

The witnesses were James Henry (-) and Hannah Henry (-)?

Daniel & Eliza had three children ... registered but with no baptism records? -

George Knapper (1854-1922) born in 1854 in Wolstantom married Sarah Harriet Davies (-), Daughter of Herbert Davies of Sandbach, in Wheelock 6 August 1876. Witnesses were Edward Birchall and Elizabeth Bailey? George was an 'Engineer' and Daniel a 'Forge Man'.

1851 census Daniel aged 24, was living with wife Eliza (1828-95) in Wolstanton as lodgers with John & Mary Cullwood. Born in Wedenbury. His occupation was a 'forge man puddler'. This confirms some family gossip from Harry Knapper. Harry wrote that his g-grandfather was Daniel who lived for sometime in Wheelock. Daniel's son George married Sarah Harriot Davies in 1878 the Davies' were an influential Sandbach family owning many Public Houses, one of Harriot's sisters married a Foden and Harry's father was cousin to the 'Foden boys'. Harry had been told by his long deceased relatives that Daniel Knapper was a specialist Forgeman who moved around due to his specialist work. He eventually settled in Wheelock and worked for the railway company earning a large salary of £20 per week and lived in a fine and large house?

1861 Daniel, listed as 'Nappier', was living in Tipton aged 33, Puddler of Iron, as a lodger born Kidsgrove in the Staffordshire Potteries.

1881 Daniel was living in High Road, Wheelock with his son in law Henry Steele (1857-) aged 24, and daughter Elizabeth Steele (1855-) aged 26 and three grandchildren Emily 3, Clara 2 & Annie Eliza 1. Also with them was an Aunt to Henry or Elizabeth called Fanny Duurell or Daneil? Age 59. But no Eliza.

In 1881 Daniel was living in High Road, Wheelock with his son in law Henry Steele (24) and daughter Elizabeth Steele (26) and three grandchildren Emily 3, Clara 2 & Annie Eliza 1 also with them was an Aunt (to Henry or Elizabeth) called Fanny Daneill, age 59.

Eliza (1854-1895) died on 23 March 1895 in Cotton Row, Wheelock age 62. She died from Paralysis Diarrhea. Alice Steel was present at the death probably her granddaughter?

Harry Knapper's cousin, Frank Knapper, confirms his paternal grandfather was called George Knapper (1854-) who was the son of Daniel. Daniel was a metallurgist who came to Crewe to specialise in steels for railway engine tyres. He was comparatively wealthy and lived in a large house in Wheelock. He was married in Wheelock church.

Frank wrote in 2002, 'I think that I may be related to Christopher Knapper. I believe that his father Harold was my cousin. I had better tell you something about myself. I was born in Swansea in 1931, and have a sister Barbara who lives in Epping. My father married my mother Violet Mary Jones in 1926. I am a chartered engineer (retired) having graduated in mechanical engineering from University College, Swansea in 1954. I have spent most of my working life with the chemical company ICI. I was married in 1955 to Nan Day. We live at 37 Oakdale, Harrogate, North Yorkshire HG1 2LW, and have 3 children. Simon Robert Knapper who lives in Croydon, Ceri Jane Walker who lives in Switzerland and Ian Dennis Knapper who also lives in Harrogate. Ian is married to Sarah and has 2 boys Jack aged 6 and Sam aged 3.
Are you aware of the Burkes Peerage World Book of Knappers, which lists Knappers living in 1995 throughout the world. You can obtain a copy from -
BURKES PEERAGE
c/o Customer Service Centre
Marlborough Rd
Aldbourne
Marlborough
Wilts
SN8 2HP.
We even have a coat of arms'!

back to Edward Birchall