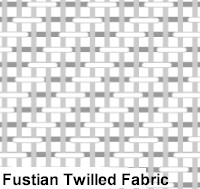 Textiles, fabrics or cloths are flexible woven materials consisting of a network of threads or yarns. Yarn is produced by spinning or twisting raw fibres of flax, wool, silk & cotton into to long strands. Textiles are then formed by weaving (or knitting, crocheting or knotting) the yarns together to form the network of longer threads or warps with a set of cross threads or wefts.

Fustian is a type of cloth believed to have originated in 2nd Century Egypt, at a place called Fustat. Fustian had a strong linen warp, and a cotton weft, a long lasting, lard wearing coarse twilled fabric with a slight nap.

Linen had been produced from the flax & hemp grown on every farm from way back; this was a 'cottage industry'. When cotton was first imported into London around 1600 basic fustians, with the lined warp and cotton weft, began to appear. Particularly around the Bolton / Blackburn area.

Fustian was also the old name for corduroy, a kind of cotton velvet. This basic cloth had extra looped wefts woven in as it was made. The rolls of cloth, 18-24 inches wide, were then sent to specialist fustian cutters. In a well lit room the cloth was pulled tight over benches up to 150 yards long and stretched with rollers at either end. The cutters would then insert a sharp knife like instrument with long guide into the loops, called a race (a tunnel of loops). The threads were cut with a sweeping movement as they walked the length of the cloth. This was similar to opening a letter with a knife but considerable dexterity and accuracy was needed. The cut wefts formed the pile. The cloth was then brushed to raise the pile. 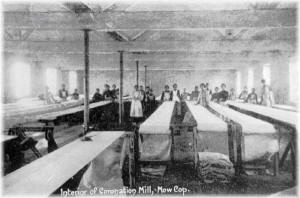 All this sounds simple but the best quality fustian, like velveteen, needed 40 cuts per inch. This meant that a worker had to walk many miles a day to cut the wefts. If they made a mistake during the cut, there was trouble, likewise, if they had to leave a cloth for someone else to finish this again would lower the value. Different people cut in different ways, perhaps every individual held their knife at slightly different angles which resulted in noticeably different piles. Money was also lost if a knife was broken, as the master's skill was required to sharpen the tool ... time was money and the more you cut, the more you were paid. Men had a slight advantage over the women in the fustian trade, perhaps they could walk more miles per week, and secondly many could hold two knives at once, thus doubling their output & income.

A two yard length of cloth two foot wide could take about an hour to cut. In the 1850s 2½d might have been paid. Later payment by the piece was introduced and cutters might earn up to 15s per week for ten hours work per day.

Or course flax and wool had be spun and woven into cloths by hand in England for centuries. The work was done in almost every dwelling in the land. Flax drying to produce linen had been carried out in Liverpool since at least 1540, as an order forbidding the drying of flax inside houses because of the risk of fire was made in that year. By the late 16th century linen production centred on Manchester had spread to Blackburn, Burnley, Preston and Oldham. The growing demand for a linen warp for the expanding cotton industry boosted production. The first cotton based cloths to be produced in Lancashire were fustians, which were cloths with a stronger linen warp and a cotton weft. These were being produced from the 17th century.

However the breakthrough into mass production in manufactories started slowly in the 18th century as centralised water power was harnessed and spinning & weaving machines developed. The first powered machines were developed to produce silk yarn which required extensive twisting to produce the strong fine yarn required for quality garments. Almost impossible to do economically by hand. 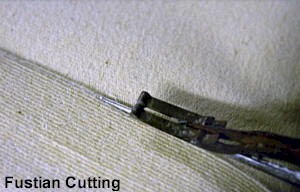 In the 19th century, silk & velvet producers, began to set up separate mills where they would employ many cheaper youngsters to cut fustian for them as cotton became all the rage and silk production declined. Numerous fustian mills sprang up where labour was available and cheaper ... Newcastle-under-Lyme, Hebden Bridge, Lymm, Wilmslow, Middlewich, Winsford ... places where the men often worked but the girls were without jobs ... for sure, fustian cutting revived the fortunes of the Congleton textile trade in the 1860s after the decline of the silk industry. This followed the free trade agreement of 1860 between the United Kingdom & France, the Cobden-Chevalier Treaty, the Congleton silk industry could not compete, real wages were too high. The advantages of free trade were little understood as unemployment rose and Congleton lost its glorious silk industry.

Production of fustians became more important than linen, although linen, wool, silk, fustian & cotton inevitably coexisted as economics and fashion ebbed and flowed. But why fustian?

Fustian was worn by workers during the 19th century. Radical elements of the British working class chose to wear fustian jackets as a symbol of their class allegiance. This was especially marked during the Chartist era ... the origin of the modern denim 'jeans'?

Fustians enjoyed a period of great demand until imported cotton goods from the Indian subcontinent began to be popular with the more affluent and those who sought to emulate them. Fustians had a resurgence when acts were passed banning cotton imports which were damaging the woollen and silk industries. The invention of Arkwright's water frame made the spinning of strong cotton warps possible and that plus the superior quality and versatility of cotton meant that by fustian production was vulnerable.

English fabrics followed fashion and economics from linen, to wool, to silk, to fustian, to cotton to man made fibres ...

The Bobbin Industry; an overview - Michael Davies-Shiel
There has always been a need for storing fabric threads on spools. Lace makers had used tiny bobbins from very early times. But suddenly, apparently out of nowhere, the bobbin/reel trade took off c.1755 in South Westmorland and North Lancashire. A fortuitous event took place at that time, which has not been obvious to most historians, for it was part of an entirely different industry.
For most folk the Industrial Revolution began in 1784, the year that an Act was passed permitting the manufacture of 100% cotton cloths. However, what is still not realised is that the so-called 'Dark Satanic Mills' - taller than most castles and churches of the time - four floors high and with rows on windows, were not built in England in the 1780s as cotton mills, but in the 1730s as flax mills, making that time the true start of the Industrial Revolution.
The bobbin mills began shortly after, providing all manner of reels and bobbins for linens for the burgeoning fashion trade, but also curtains, carpets, sailcloths and cordage (all of which, once worn out, supplied rags for paper manufacture). Acts of 1712, 1721 and 1736 aided flax manufacture. Most new fabrics had to have flax warp threads, be they linsey-woolseys, checks, fustians or ginghams. Bobbins and reels were in great demand. Also, from 1711, three iron blast furnaces were constructed in North Lancashire and Lancashire North-of-the-Sands, taking advantage of the excellent iron ore, waterpower and charcoal. The latter came from coppiced woodlands pre-planted in anticipation onto poor grazing lands. However, by 1755, two of the most northern furnaces closed, leaving thousands of acres of mature standing coppice with no apparent market value - a fortuitous event! Eventually, there have been over 124 bobbin and reel mills in Cumbria alone.

back to Edward Birchall