Vague family stories suggested that some amongst Edward's 11 strong family made a living in the hurly burly of the travelling fairgrounds ... now that was interesting? 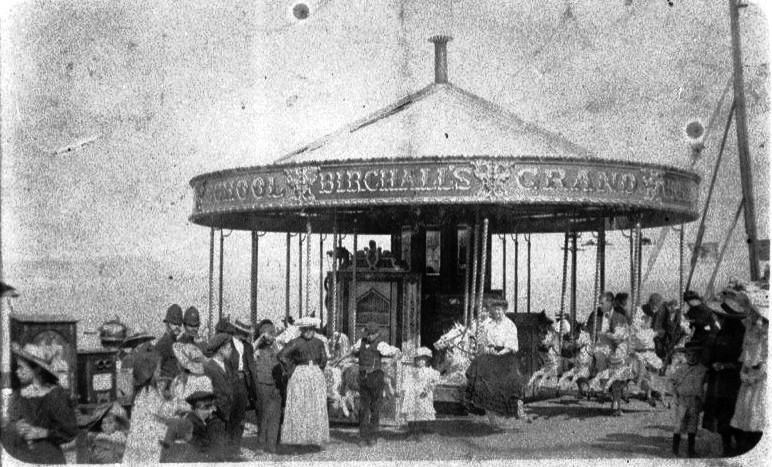 When we contacted Hector's family in 2015 Brian Birchall asked us for news about other family members ... Jack? ... who moved to Kent many years ago ? ... and Lizzie? Frank? & Dolly? ... Hetty?, Barbara? & Sheila? ... who worked on the fairgrounds? We were fascinated, were they connected to the 'famous' Birchalls of the travelling fairs ... were they the steam driven roundabout folks?

We started ferreting. Family history led to social history and a rich tradition of fun which compellingly appealed. 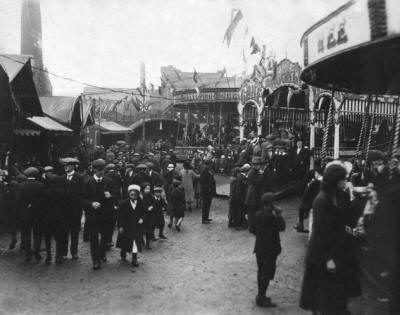 In 1896 the Glasgow Christmas Fair included the Birchall’s Ghost Show?

A strong flavour of what these Birchalls were up to came from The Glaswegian - 15th July 1886 and The Detective – 16th July 1885 - ‘Among The Shows at Vinegarhill’ ... as students in the 1960s we knew Strathclyde University and, of course, Gallowgate leading to Celtic at Parkhead but Calmachie was unknown ... and Vinegar Hill was not even on the map ...

‘The ‘shows’ with their yards of flapping canvas, still brave the breeze. Doubtless our social progress has condemned them to an obscure grave, but they die hard. The showman is not easily killed, his canvas always a fascinating influence over the juvenile portion of the community, and the pictures that adorn the exterior of the booths are sufficiently tempting to induce the youths to deliver up his penny at the door. The degenerate condition into which the ‘Fair’, as represented at Vinegar Hill has gradually fallen bespeaks at no distant date to collapse. The good old days that made Glasgow Fair famous are gone, and in their place we have a collection of starved hares and canaries, smooth faced giants, mysterious looking females, colossal alligators, and diminuitive men and women. Leaving historic Trongate, and skirting along Gallowgate, dodging in turn tram-cars and old women with apple stalls who implore me to invest, I reach the Fair ground.

What a noise! the yelling, howling, swearing, laughing, thieving and devilry. What a combination of brass bands, steam whistles and organs! Here every human contrivance is put into operation in order to draw the hard-earned copper from the pockets from the artizan. Everything under the sun, from ‘Birds of Paradise’ to ‘Tamed Rats’, all are crowded together in a small square for the benefit of holiday makers. Trumpet speaking men proclaim the excellence of their particular show, about which ‘there is no deception’. Zulus dressed in their native costume execute war dances on the platform, and invite visitors to step inside.
Tragedians, arrayed in all their glories of tin helmets and spangled jackets, with wooden swords, loudly assert that they will play ‘Hamlet in five long acts’. Fairies, in satin and muslim bid defiance to the time honoured custom of keeping behind the curtain, and strut on the outside stage as alligators, that is if the representations on the canvas are correct, and a sudden impulse toview the aforesaid snakes seizes me. But my desire to enter is nipped in the bud, a sheet of paper the writing on which announces the show is ‘full’, so I have to pass on. 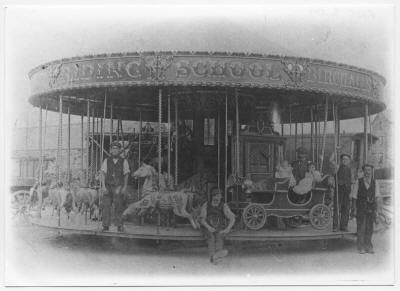 But the place is abominably dirty, and the odour of the company and of the lurgan twist they are smoking is powerful, so very powerful that it frightens me and I bolt.

A sparring booth is the next place worthy of notice. Professors of the ‘noble h’art’ are haranguing the crowd, and invite all and sundry to step in and have a ‘go’. I am not at all inclined to pay twopence for the privilege of having my nose double its ordinary size, so again I pass on. ‘A reg’lar beauty’ shouts a bleary-eyed, dissipated looking fellow, ‘weighs twenty six stone’. I gazed at the enormous size of the woman depicted on the canvas, and then the very small proportions of the caravan, until I am lost in wonder, as to whether the woman holds the house, or the house the woman. It is no use disputing the ‘beauty’ of the woman as tastes differ, and I leave the proprietor, though he doesn’t look like one, endeavouring to entice open-mouthed urchins inside the tent. During the next few minutes I am in the midst of the ‘hares’, ‘snakes’, ‘wonders workers’, and ‘jugglers’.

Insinuating owners of ghost shows try to wheedle me within their web, but I am obdurate. Sometimes a pretty, occasionally and ugly, face makes a fierce dart at me from a shooting saloon, and endeavours to thrust a gun into my hands; now a lazy Italian, with his ice-cream, seizes me by the arm and whispers his price into my ear. But I am not to be wheedled, and passing rapidly over the smaller fry, I reach a booth clean and tidy in its outward appearance, where ‘Alonzo the Brave’ is the chief attraction. I enter the temple of drama, passing in my ascent, villains, robbers and heroes. There is a large audience composed of every conceivable grade, from the swell with his eye-glass and spats, down to the dirty faced urchin who wipes his nose with the cuff of his ragged jacket. Here is a youth indulging in his first dissipation of summer drinks, while there is another one who is cramming cakes of gingerbread down what appears to be a bottomless pit. And here is a factory girl, who has come to have a good ‘pen’orth’ of the drama, while there is the gammin all eyes and ears for the commencement. ‘The band will play the last ‘toon on’h outside’ cries the first robber, ‘and when we go h’inside to begin’. The musicians strike up ‘God save the Queen’ and the actors make their way through the audience and pass through the stage door. The band is seated, there are two or three preliminary flourishes on their part, and then the curtain is rung up.

I do not wait the consummation of the drama and amid the murmurs from the pit I see the door. The rain is falling heavily and the crowds are gradually melting. Therefore, and as I have had enough of the shows for one season, let us jump into this tram-car bound westward, and seek the cosy circle around the fireside.’ 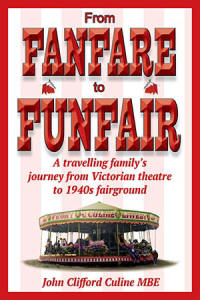 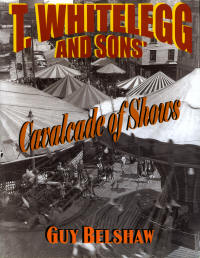 Originally established in villages & towns by custom & practice as trade & social fairs ... synergies of interactive intensity for trade & fun. Long before Royal Charters got in on the act and secured revenues in return for a 'right' to hold a fair as a mandate from above. It was rumoured once feudalism was on the way out you could buy & sell anything & everything at the fairs ... including a wife! Goods, serivces and fun were traded with alacrity as traders and showmen rode to a triumphant pinnacle in Victorian times with the travelling fairs. As trade became a hum drum routine every day of the week the entertainment fairs burgeoned as folk yearned for a fun break from the grind of crumbing the family table. At first there were the show booths, circuses, fortune tellers, magic, boxing, gambling, waxworks, menageries and freaks to supplement the fun of food and music ... and 1800-50 came the steam driven roundabouts! There was competition from the indoor Music Halls ...  and 'elf 'n' saftey ... and downtown space began to dilute the community magic.

The World's Fair newspaper was started in 1904 to support travelling showmen with business and community news. The fairground community has a rich history and heritage and World's Fair records for posterity, ongoing business activities and social events, including those of The Showmen’s Guild of Great Britain. As well as the company’s own archives, copies of World's Fair are also stored at the British Library and the National Fairground and Circus Archive and these newspapers are a valuable source of information for fairground historians, both now and in the future. The website can be viewed at www.worldsfair.co.uk.

'The World's Fair' of December 1934 reported that Whitelegg's had been open at New Passage, Plymouth since October. The Dodgems and Thriller were open at weekends, supported by Jack Pannell, Mrs Birchall and Johnny Oldridge.

Reg Chandler had written up his research thesis in a book 'All the Fun of the Travelling Fair'!

We remembered our own excitement on the Roodee Chester on Race Days ... the sticky taste of candy floss, the acidic smells of the bumper car rides, the piping hot dogs with mustard sauce and the real live gold fish that we had 'won' and taken home ... and tried, forlornly, to resusitate ... we didn't join the white knuckle brigade ... some said we were whimps ... but wow wot fun.

back to George W Birchall