Evolutionary Economics ... Dixieland Jazz ... there is an evolutionary explanation for everything? 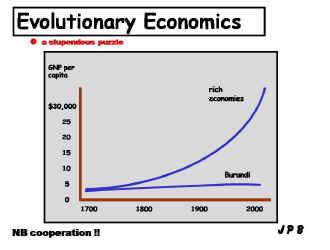 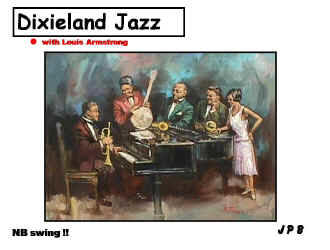 In 1859 Charles Darwin explained how economics & jazz and everything else evolved ... including families, beer prices, factories, saxophones and the Boeing 747 ... an extravagant claim? ... yes ... but relentlessly, every day, the supporting evidence from empirical science mounts ... these pages hail one of the men who made the understanding of complexity possible ... a dwarf standing on the shoulders of an army of ancient ancestral giants can see a long way ... and what a view!

Once the genie was out of the bottle the search was on and all happenings became exciting opportunities for survival rather than fearsome problems.

We guess you may think that family tribes, economics and jazz are a bit 'way out' ... are they really adaptations? ... here you will find a light hearted Darwinian look see at 'the bigger picture' ... be aware, the last time we looked happenings were a tad more complicated than Grannie told us ... but they were a lot more fun.

Economics easily becomes embroiled in the analysis of a stream of outrageously arrogant political policies & tittle tatle but the 'dismal science' can resist becoming locked into simpler mathematical models with unrealistic assumptions ... and avoid the inevitable result; bum predictions which don't work. Evolutionary Economics cuts the crap and assumes nothing but the simple copy / vary / select process where outcomes are unknowable and have to be discovered. Perhaps, as Darwin himself suggested, all human behaviour should be understood as evolutionary and Evolutionary Economics will lose its qualifier and come of age as 'Economics' ... the science of the quaint but convoluted behaviour of folk?

Music is enjoyed everywhere and a few folk even have a go at new fangled jazz but it's not easy and most run of the mill teachers tend to ignore the early innovations from 'Dixieland' which evolved into a new species of music, 'Jazz' ... a quaint but convoluted folk music?

The bottom line - song & dance inspires the smiles & fun of social interaction, but serious music is for serious folk.

If you have any interest in these notions maybe some of the pages around here will be fun ... and maybe generate some useful optimistic insights ... all these notes have been discovered & accumulated over the years to help us with our own studies ... but remember ... it's all a bit of fun ... not about what is ... just about what maybe?

How to understand Evolutionary Economics !

How to play Dixieland Jazz !

How to enjoy Family History !

... if only we'd had some of this stuff available when we started ...

but as the man said, 'if you think education is expensive, try ignorance' !

Xenophanes - ‘The Gods did not reveal, from the beginning, all things to us, but in the course of time through seeking we may learn & know things better. But as for certain truth no man knows it, nor shall he know it, neither of the Gods nor yet of all things that I speak. For even if by chance he were to utter The Final Truth, he would himself not know it: for all is but a woven web of guesses.’ 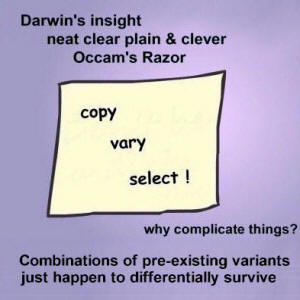 PS nothing you will find on these pages was the result of top down human intention ... inevitable unintended consequences and the 2nd Law of Thermodynamics saw to that ... such was never ever 'intelligent design' as 'plausible, deliberate, rational, purposeful, intentional, planning' ... rather 'intelligent design' itself was just the complex outcome of a simple process of bottom up Darwinian natural selection ... wot else could it be? ... supernatural selection?

... and always into the mix were parasites & predators ... as soon as there were stacks there were thieves ... there was no way out of that !

Darwin's insight was anchored in the empirical tradition of British science ... it all started with observation ...

a double blind randomised control experiment in Scunthorpe which was repeated in the Antipodes 17½ nights later with the same peer reviewed results was meaningful irresistible evidence which could never be ignored ... but the answer always depended on the next question ... the rest was tittle tattle ...

... and the process wasn't rocket science ... folk of all ages, shapes & sizes continually tried to discover 'new survival tricks' and some tricks survived & accumulated in populations of tricks by a round & roundabout process of -

... many folk just didn't get it ... but if & when the penny dropped the implications were shattering ...

Shattering because Darwin's insight described evolutionary change & survival as a process of weeding out failures and not the intelligent design of 'good works' ... and there was more, weeding out failures by natural selection was good news ... and exciting fun ... a positive sum story of accumulation synergies 2+2=5, as 'know how' relentlessly grew thru learning & compound interest, even though there were the inevitable zero sum parasites & predators where 2-2=0 ... the maths of synergies was staggeringly strange but excitingly enlightening.

Natural selection has no truck with the good intentions of Bishops, Princes, Generals & Bureaucrats ... like prancers at rain dances they arrogantly tried to hoodwink ordinary Joe by claiming a privileged access to 'know how' ... 'uber alles' as the Deutsch would say ... a supernatural capacity to orchestrate events & legislate happiness through the command & control of the behaviour of other folk.

Stick with the knitting of Empirical Science and 'bottom up' hard work, honesty & thrift ... be sceptical about 'the man with a plan', 'top down' command & control was not what it seemed to be but rather it was -

experimenting with ideas in the local environment

Some experiments 'worked' and were remembered ... but most failed (even the 'best laid') ... remember the 2nd Law of Thermodynamics -

'there were many more ways of being dead than alive'?

Sooo forget 'moral outrage' and 'furrowed brows' ... and have some fun learning & experimenting -

'rather than being appalled by the fearsome problems of bad behaviour, we should be astounded & awed by the outstanding opportunities for good behaviour' 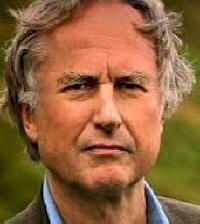 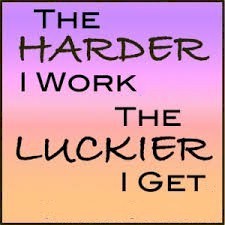 Happenings were never luck ... we were privileged to have been born with the legacy of Charles Darwin (1809-82).

Listen to Richard Dawkins on life, Darwin & everything -

'What really happens is that the gene pool becomes filled with genes that influence bodies in such a way that they behave 'as if' they made complex, unconscious, cost/benefit calculations for survival'.  Richard Dawkins -The Selfish Gene, 1976.

... and Robert Axelrod on Evolutionary Economics -

‘The key to doing well lies not in overcoming others but in eliciting their cooperation. Individuals don’t have to be rational; the evolutionary process alone allows successful strategy to thrive, even if the players do not know why or how. No central authority is needed, cooperation is self policing’. The Evolution of Cooperation, 1984.

and Wynton Marsalis on Jazz -

'There's no right or wrong ... just some choices that sound better than others. Try, there's no shame in failure, there's only shame in not remembering and repeating failures'. Jazz, 2000.

On Gilmore Hill around 1958 we learned how to learn ... not from the detail of fearsome textbooks but from the hard knocks of our own failed experiments and the failed experiments of our mates ... and we also seized the exciting opportunity to learn from the persistence of a couple of local giants long dead -

'In August 1838 Charles Darwin himself came to study Adam Smith ... his focus was on the individual embedded within populations as the central element of theory. The Scottish Enlightenment held a 'humanist' view of trying to understand the whole in terms of the interactions of individual parts ... nothing supernatural.
By July 1839 Darwin had an evolutionary view of everything around him: the planetary system in the universe, our own planet earth, its geology, its climate, its living organisms and their social organizations.
The mechanism of this evolutionary process was accounted for only by the invariable Laws of Physics and Chemistry and the principle of natural selection ... ' The Origin of Origin Revisited', Brandeis University 1977.

@ most of these somewhat desultory notes were discovered in imaginations and accumulated from jottings at The Open University around the 2000 millennium,